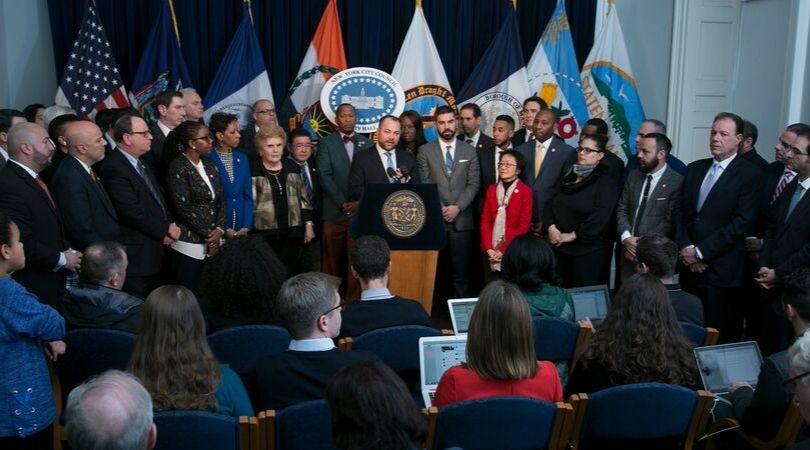 In response to a lawsuit filed in January, the New York City Council introduced a bill on Thursday to repeal the city's local law number 2018/22 that outlawed certain psychotherapy goals to reduce unwanted same-sex attractions and gender dysphoria — demonized in the media as "conversion therapy."

Roger Brooks, chief counsel for ADF, told PJ Media, "The city council's move toward repeal is a win for Dr. Schwartz, his patients, and all New Yorkers."

"All New Yorkers and all Americans deserve the right to private conversations, free from government control," Brooks said. "By trying to regulate and censor private sessions between an adult and his counselor, New York City directly violated freedom of speech — a core right protected by the First Amendment."

The law is an unprecedented reach into the confidential relationship between a therapist and patient.

The suit blasts the Counseling Censorship Law as "unconstitutional in its entirety" and claims it was passed in order to suppress ideas the City Council disagrees with.

The suit argues that the law is an unprecedented reach into the confidential relationship between a therapist and patient to "prohibit the discussion and exploration of ideas — and even the patient's own personal goals — to which the New York City Council objects."

Not only does the law forbid what type of goals patients can set for themselves, it expressly allows only those that affirm the patient in either homosexuality or transgenderism. The suit explains:

Most glaringly, while the Counseling Censorship Law prohibits mere words if they aim to help an individual patient achieve a gender identity congruent with the patient's biological body and reproductive potential, the Counseling Censorship Law expressly allows any method of therapy at all if it aims to help an individual "change" his gender identity to that of the opposite biological sex.

Cory Johnson, New York City Council speaker, who is openly gay, said the city would begin repealing the ban immediately to protect other counseling censorship laws. To date, 18 states, the District of Columbia, Puerto Rico and 55 communities have enacted therapy bans. Sixteen other states are working to get similar legislation passed.

"Obviously I didn't want to repeal this," Johnson said. "I don't want to be someone who is giving in to these right-wing groups. But the Supreme Court has become conservative; the Second Circuit, which oversees New York, has become more conservative."

Church Militant spoke with Christopher Doyle, a licensed clinical professional counselor at the Institute for Healthy Families, who said, "These laws are nothing but a sexual culture war being fought on the mental health battlefield."

"It's abundantly clear that by repealing their own ill-conceived ban on voluntary psychotherapy for adults distressed by unwanted same-sex attractions and/or gender identity conflicts, LGBT activists are far more interested in imposing their ideological agenda on the large scale rather than 'protect' clients from so-called 'conversion therapy,'" Doyle said. "Otherwise, they would have fought this legal battle with their abundant resources."

Doyle explains in his book, The War on Psychotherapy: When Sexual Politics, Gender Ideology, and Mental Health Collide, "The strawman of 'conversion therapy' laws that were built on the fraudulent testimony of electric shock and torture therapy is beginning to crumble."

The SPLC spearheaded the attack on therapy goals with the first of its kind lawsuit against Jews Offering New Alternatives to Healing (JONAH) in 2012.

While its co-director, Arthur Goldberg, insists that the organization did not provide counseling — only referrals to counselors — the SPLC brought a consumer fraud suit against JONAH. This was the first time consumer fraud protections were applied to a not-for-profit organization with clients that didn't pay for their treatment.

Court documents from that trial indicated that the SPLC actually recruited the plaintiffs for the sole purpose of targeting JONAH.

The SPLC's targeted attack against JONAH resulted in multiple trials and the shut down of a faith-based crowdfunding site Funding Morality. Goldberg is also facing over $3 million in fines, some of which goes toward paying for the legal fees of the SPLC.

In that first trial, New Jersey Superior Court Judge Peter Bariso Jr. deemed that several notable experts in the field of reparative therapy, including Dr. Joseph Nicolosi, were "unreliable" and could not testify to the efficacy of therapy for those struggling with same-sex attractions.

Bariso agreed with the SPLC opinion that "it is a scientific fact that homosexuality is not a disorder" and went so far as to call that idea "outdated and refuted" claiming "every legitimate professional association" agrees with him.

According to the APA, "The inconvenient reality ... is that social behaviors are always jointly determined by nature, nurture and opportunity."

A new study performed on almost half a million people in the United Kingdom found no singular genetic marker for homosexuality.

At most, genetics can account for between 8% and 25% of the variation in same-sex behavior. The study appears to agree with the APA handbook that it is a complex mixture of genetic and environmental influences.

Alarmed by the legislative overreach, thousands of licensed professionals, their clients and public policy organizations formed a coalition to document the lies being pushed to lawmakers so that these so-called "conversion therapy" bans would be passed.

The National Task Force for Therapy Equality (NTFTE), over the course of five years, was able to document numerous gay activists caught on video lying to lawmakers about their experiences with "conversion therapy."

One of the most blatant examples of this deception was shown in the testimony of Brielle Goldani, a transgender woman who spoke to New Jersey lawmakers considering their therapy ban.

Upon scrutiny, NTFTE showed Goldani's testimony was completely unsubstantiated, and the only reference to True Directions, the so-called conversion camp Goldani attended, is a 1999 Ru Paul satirical movie called But I'm a Cheerleader.

Church Militant reached out to Alliance Defending Freedom but has not heard back by press time.