TULSA, July 9, 2015 (ChurchMilitant.com) - In a remarkable and rare move, a state governor is defying the order of its highest court. Governor Mary Fallin of Oklahoma is resisting last week's state Supreme Court ruling holding the Ten Commandments monument an unconstitutional violation of separation of Church and State, and Fallin claims the monument is here to stay — at least for now.

Although the U.S. Supreme Court has upheld the right of states to display the Ten Commandments on public property based on their historical (and not necessarily religious) relevance, the Oklahoma Supreme Court ruled 7–2 that the monument violates the state constitution, which includes a clause that forbids public funds or property from being employed "for the use, benefit, or support of any sect, church, denomination, or system of religion, or for the use, benefit, or support of any priest, preacher, minister, or other religious teacher or dignitary, or sectarian institution as such." 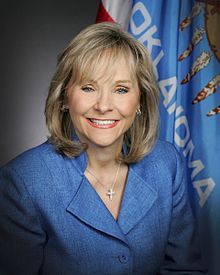 But the governor says outright that "the court got it wrong." In a statement Tuesday, Fallin said:

The Ten Commandments monument was built to recognize and honor the historical significance of the Commandments in our state's and nation's systems of laws. The monument was built and maintained with private dollars. It is virtually identical to a monument on the grounds of the Texas State Capitol which the United States Supreme Court ruled to be permissible. It is a privately funded tribute to historical events, not a taxpayer funded endorsement of any religion, as some have alleged.

Nevertheless, last week the Oklahoma Supreme Court ruled Oklahoma's Ten Commandments monument was impermissible. Their decision was deeply disturbing to many in our Legislature, many in the general public, and to me.

Oklahoma is a state where we respect the rule of law, and we will not ignore the state courts or their decisions. However, we are also a state with three co-equal branches of government. At this time, Attorney General Scott Pruitt, with my support, has filed a petition requesting a rehearing of the Ten Commandments case. Additionally, our Legislature has signaled its support for pursuing changes to our state Constitution that will make it clear the Ten Commandments monument is legally permissible. If legislative efforts are successful, the people of Oklahoma will get to vote on the issue.

During this process, which will involve both legal appeals and potential legislative and constitutional changes, the Ten Commandments monument will remain on the Capitol grounds.

The court ruling came in light of an ongoing petition by the Satanic Temple to set up a rival satanic display on the Oklahoma capitol grounds. The display includes a statue of Baphomet, a goat-headed figure representing the devil, flanked by two children, with an inverted pentagram as a backdrop. In light of the court decision, the satanists dropped their petition and expressed satisaction with the ruling. They now have their sights set on Arkansas, which has just approved its own Ten Commandments display. 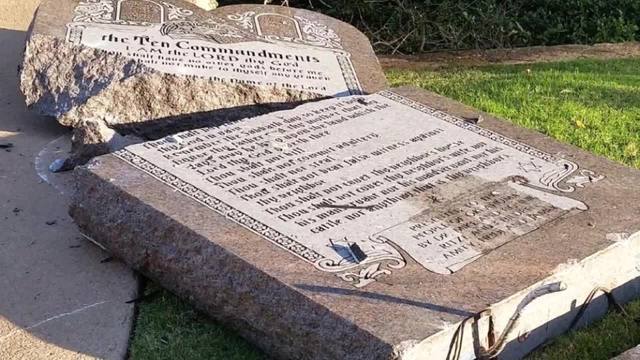 The Oklahoma monument has been damaged and replaced before, after a man who claimed he was acting under orders from Satan drove into it with his car and smashed it into pieces. He then urinated on the broken display.

Governor Fallin's response highlights a growing trend among federal or state executives to refuse to enforce laws they find objectionable. According to the federal and state constitutions, the three branches of government — the legislature, executive and judiciary — each have their own proper spheres of authority. The legislature is tasked with making the laws, the executive with enforcing the laws, and the judiciary with interpreting the laws. Once the judiciary has issued a ruling, it becomes law — and the executive branch is then obligated to ensure the law is implemented and enforced. 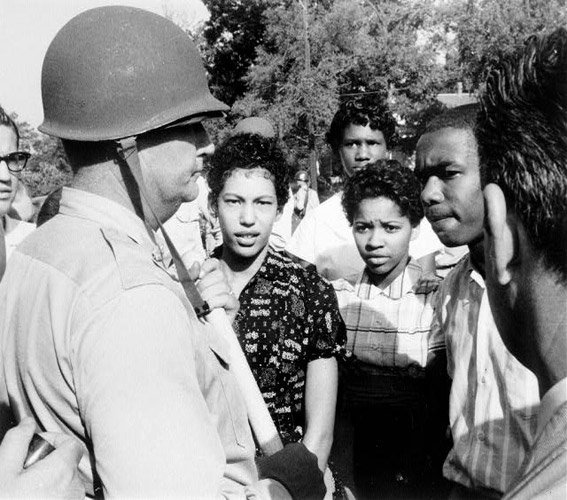 Refusal by the executive branch to enforce the law is a rarity, and critics claim it results in lawlessness. The first major crisis involving a clash between the executive and the judicial branches occurred in Little Rock, Arkansas in 1957. After the U.S. Supreme Court handed down the Brown v. Board of Education decision in 1954 holding public school segregation to be unconstitutional, states were ordered to start desegregating their schools. A number of state governments resisted, including Arkansas, where a national showdown took place in front of Central High School in Little Rock in September 1957. Governor Orval Faubus, who resisted the Court order to desegregate, sent in the Arkansas National Guard to prevent a group of nine African American students from entering the school. The federal government eventually got involved, and in late September, after several weeks of unsuccessful negotiations with Faubus, President Dwight D. Eisenhower sent in the U.S. Army's 101st Airborne Division to Little Rock to escort the students to class. Although they were able to attend school the rest of the year, the turmoil continued. After enduring a year of verbal abuse, only one of the nine students graduated in 1958, becoming the first African American to graduate from Central High.

In more recent times, President Obama has defied the duties of his office by instructing the Justice Department in 2011 to no longer defend the Defense of Marriage Act (DOMA), a validly enacted federal law that prohibited federal recognition of same-sex "marriage." Obama declared DOMA unconstitutional by executive fiat. Critics claim the move was an illegal violation of the separation of powers — more specifically, it was an unlawful usurpation of the role of the judicial branch, which alone has the authority to rule on the constitutionality of federal laws.

And the year before that, the attorney general of California refused his duty to defend Proposition 8, the state measure passed by popular vote that defined marriage as between a man and a woman. With the backing of then Governor Arnold Schwarzenneger, AG Jerry Brown failed to file an appeal defending Proposition 8 with the appeals court after the measure was struck down in the lower court. 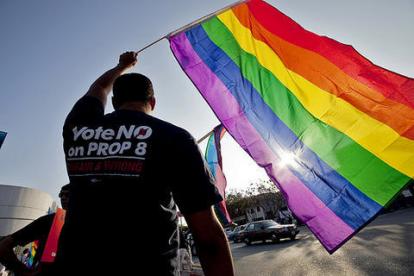 In fact, it was because of the executive branch's refusal to defend the law in court that the measure ultimately failed: After the California government declined to pursue the case in court, a group of private California residents requested to step in to defend Proposition 8 in the government's place. The court granted them permission — but the U.S. Supreme Court reversed, finding that the parties lacked standing to sue — a legal term of art essentially finding that a party fails to qualify to litigate on behalf of a particular cause. Because of the lack of legal standing, the case was never decided on the merits, and to this day, the lower court decision ruling Proposition 8 unconstitutional stands.

The U.S. Supreme Court's decision last month declaring a constitutional right to same-sex "marriage" in all 50 states has led to an increased discontent with the judiciary, and greater support for states to ignore the courts. A recent Rasmussen poll reveals that fully one third of U.S. voters believe states should have the right to ignore federal court rulings — up nine points from February. Half of all GOP voters — a demographic that has traditionally been most supportive of the traditional roles of the three branches of government and separation of powers — believe the states should be able to override the federal courts. And another Rasmussen survey reveals that, directly after Obergefell v. Hodges was handed down, dissatisfaction with the Supreme Court is at its highest levels in nearly a decade.

Governor Mary Fallin's refusal to enforce Oklahoma's supreme court ruling signals yet another instance in which conservatives are bucking the judiciary when it rules against long-held and deeply cherished tradition.