On the Hook for Millions

Jersey City, NJ (ChurchMilitant.com) - The Southern Poverty Law Center (SPLC) continues to target a Jewish conservative for advocating reparative therapy, a form of counseling for those seeking to heal their unwanted same-sex attraction.

Arthur Goldberg sent his closest allies a letter last week, asking for help in his legal fight against the leftist giant. In his letter, Goldberg detailed the battle before him.

"I have been personally targeted for close to eight years by the infamous Southern Poverty Law Center and their allied attorneys and ... I am obligated for literally millions of dollars that need to be raised to cover the fees and costs involved," Goldberg wrote.

'Ruin Them With Judgments'

According to an expert familiar with the case, this is how SPLC operates. Christopher Doyle, executive director of Institute for Healthy Families, described for Church Militant SPLC's technique for eliminating organizations with views contrary to theirs.

He said organizations like SPLC "bring a legal cause and cut off [offending organizations'] financial purse-strings." SPLC's tactic is to bury contrary opinion holders in litigation and ruin them with judgments.

In 2012, SPLC sued Goldberg and the organization he helped found — Jews Offering New Alternatives for Healing (JONAH) — for fraud. The suit claimed Goldberg referred four clients to therapists and allegedly guaranteed their same-sex attraction would be eliminated even though the plaintiffs signed legal documents refuting such allegations.

When the court ruled against Goldberg in 2016, he closed up shop, liquidated the assets of the organization and founded a faith-based think tank — Jewish Institute for Global Awareness (JIFGA). Its mission was to promote "the laws given by G-d to Noah after the Biblical flood."

Based on his growing awareness of the culture's bias against all things pro-life, pro-family and pro-religious liberty, Goldberg launched in 2017 a unique crowdfunding site called Funding Morality. It allowed biblical values-based projects to find donors who could help them.

The decision 'constitutes one of the greatest and most insidious infringements of religious freedom' he could imagine.

In 2019, SPLC came after JIFGA, claiming it was simply an alter ego of JONAH. The judge, who also decided the first lawsuit, agreed, ruling against JIFGA. The devastating judgment required that both projects cease operations. Furthermore, Goldberg is required to pay opposing counsel's legal fees, and he is barred from leadership in any other nonprofit organization.

This time, Goldberg is appealing.

Rabbi Dr. Shimon Cowen, director of the Institute for Judaism and Civilization, is outraged by the judge's decision.

According to Goldberg, Cowen said the decision "constitutes one of the greatest and most insidious infringements of religious freedom" he could imagine.

For more than eight years, Goldberg has been under fire from the Southern Poverty Law Center. He's mortgaged his family home to pay legal expenses. Now he's reaching out to like-minded people to support him in his David-and-Goliath fight against the organization that maintains the "hate group" map in America, a map that includes a number of Catholic groups including Church Militant and the Ruth Institute.

Goldberg tells Church Militant what life has been like with the weight of a massive lawsuit hanging over him.

Living under the cloud of this litigation has been most difficult. My life has been put on hold: I am unable to make plans for the future.  In addition, I am constantly worried about the financial burdens imposed upon me by the court's judgment and the enormity of the legal fees. I am sustained, however, by my faith in G-d. For example, He opened a door for me to help alleviate some of the financial burdens because of the Natural Law Defense Fund, which stepped forward to collect funds on my behalf. I not only thank them for their efforts but I am also thankful to the many individual people who contributed to them and have otherwise supported me in the battle (many of whom I never met). I am also grateful to those who submitted amicus briefs on my behalf and who write me letters of encouragement. While I continue to experience a great deal of stress, my faith in G-d continues to bolster both my strength and my courage as the battle continues.

Goldberg is waiting for the state appellate division to schedule a hearing for his case. Meanwhile, he is inviting people to make contributions on his behalf to the Natural Law Defense Fund. 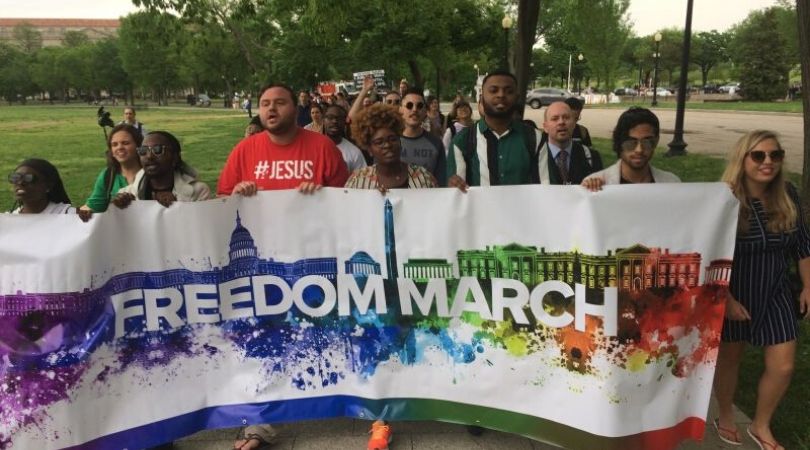