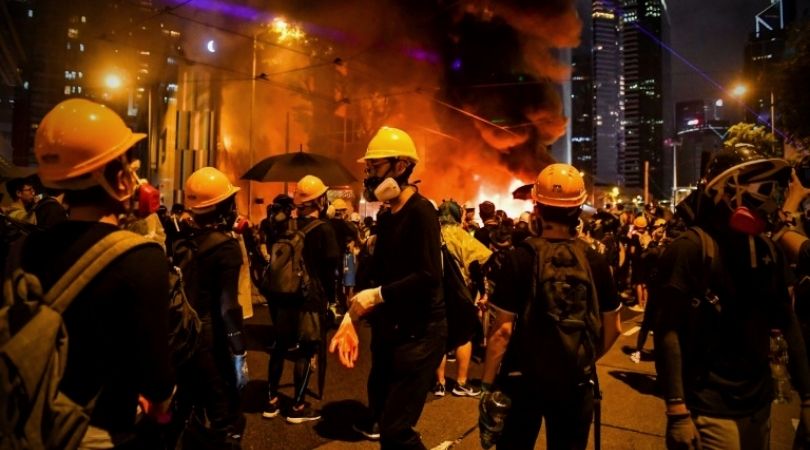 LONDON (ChurchMilitant.com) - The world is commemorating the two-year anniversary of anti-communist protests in Hong Kong.

Over 3,000 people gathered in London on Saturday to stand in solidarity with those persecuted, beaten and imprisoned in the 2019–2020 protests against Chinese tyranny.

Former Conservative Party leader Sir Iain Duncan Smith called the Chinese Communist Party (CCP) "the single biggest threat to the concept of freedom around the world at the moment."

"You are the great people — not people like me or politicians. It is your determination to stand for freedom," he told the crowd.

In addition to London, eight other U.K. cities had rallies. They are:

In the United States, ralliers gathered in Washington, D.C. as well — drawing dozens of attendees. "We are not just here to commemorate," said former Hong Kong lawmaker Baggio Leung. "We are here to carry on the fight."

New York City held a similar rally. One demonstrator, also from Hong Kong, said, "We are in a better position than many Hongkongers who are currently in Hong Kong, so what we can do is voice our opinions publicly."

A total of 52 cities across 23 countries remembered the tens of thousands who protested outside the Legislative Council to preserve their separation from the communist regime.

Hong Kong authorities labeled the 2019 protest a riot. This claim comes despite the rally being peaceful and police being the ones who fired tear gas into the crowds, injuring 80 people, to disperse them.

For Chinese Catholics, Hong Kong has been a safe haven for China's faithful.

For Chinese Catholics, Hong Kong has been a safe haven for China's faithful. One of the main pro-democracy organizers is Catholic media tycoon Jimmy Lai, owner of the anti-communist newspaper Apple Daily.

Lai was arrested and sentenced twice this year — ordered to serve a total of 20 months in jail — for participating in a so-called unlawful demonstration in October 2019.

Former Hong Kong prelate Cdl. Joseph Zen has also been a vocal critic of the CCP's tyrannical "national security" crackdown — offering to do whatever it takes to protest the new law.

"If right and proper words were considered against their law, I will endure all the suing, trials and arrests. Numerous predecessors have endured similarly," proclaimed Zen.

"Perhaps, they are truly insane. Who knows? Let them be then. Isn't there a saying, 'Those whom God wishes to destroy, He first makes mad'?"

This crackdown on personal freedom makes anything Beijing claims to be subversion, secession, terrorism or colluding with foreign forces punishable by up to life in prison.

Since the kickoff of the protests two years ago, over 10,200 have been arrested in connection to so-called unrest under these new laws. Over 2,600 were injured, and two (perhaps more) were killed.

With the fight to liberate Hong Kong from the clutches of the CCP forced underground, Hongkongers can perhaps find some solace in knowing the world watched — and is remembering — their sacrifice to remain free from Maoist tyranny.