‘Ordained by a Predator’: A Must-Read 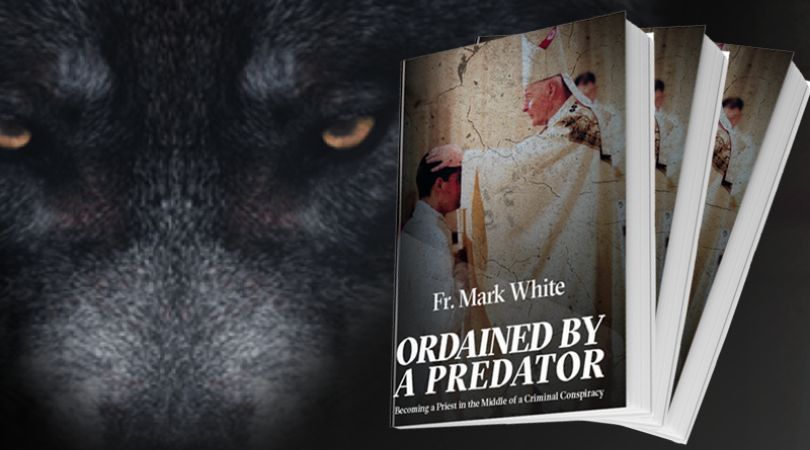 Prior to the publication of Harriet Beecher Stowe's Uncle Tom's Cabin, many Americans could not fully appreciate the evil of slavery and the impact it had on the lives of African Americans. With the recent publication of Ordained by a Predator, by Fr. Mark White, Catholics can now begin to feel the pain of canceled priests and seminarians, many of whom were sent packing by their bishops for either reporting abuse or confronting Church officials who were covering it up.

Father White was removed as pastor of two remote Richmond diocese parishes by Bp. Barry Knestout after publishing a blog in which he addressed abuse allegations involving then-Cdl. Theodore McCarrick, who ordained White for the archdiocese of Washington. When it became clear that both Cdl. Donald Wuerl and Pope Francis not only covered up McCarrick's predatory behavior but also lied about being unaware of it, White called for Wuerl's resignation and "begged" Francis to "vacate the Chair of Peter."

White's book shows how Knestout would not be where he is today were it not for McCarrick, Wuerl and Francis. After Knestout served as McCarrick's priest-secretary, he later worked as Wuerl's vicar general before being named his auxiliary bishop. It was Wuerl who recommended that Francis install him as bishop of Richmond, an event at which both Wuerl and McCarrick presided.

In light of these connections, it is no wonder that Knestout was angered when White exposed McCarrick's abuse and suggested that Wuerl and Francis resign.

While White recapitulates many of the facts involving disgraced ex-Cdl. McCarrick that were published in the November 2020 McCarrick Report, he also includes testimony from survivors like James Grein, whose alleged molestation in 1969 by McCarrick is noticeably missing from the report. Rather than blindly accepting the validity of the report's findings, White astutely acknowledges that the report was written by American attorney Jeffrey Lena, who for years defended the Vatican against sex abuse lawsuits.

Literally retained as the pope's defense attorney, White shows how "McCarrick's testimony to Lena formed the basic shape of the Vatican report." White also reveals how Lena spent a considerable amount of time attempting to impugn the character of whistleblower Abp. Carlo Maria Viganò, who called upon Pope Francis to resign for covering up McCarrick's predatory behavior, which Viganò said he reported to Francis in June of 2013.

Both Lena in his report and White in his book document how the late psychotherapist Richard Sipe was instrumental in getting Pope Benedict XVI to censure McCarrick after he posted an open letter online to the pope in April of 2008 documenting McCarrick's sexual abuse of seminarians and priests. It would have been good, however, had White also pointed out how Lena failed to call attention to the July 28, 2016 letter in which Sipe had then-San Diego Bp. Robert McElroy legally served with evidence of McCarrick's predatory behavior that he hoped would move Francis to censure McCarrick, as Pope Benedict XVI did eight years earlier.

Sipe reported, "I have interviewed twelve seminarians and priests who attest to propositions, harassment, or sex with McCarrick." Not only did Lena leave out this critical evidence in his report, but McElroy was rewarded for keeping quiet about it by being made a cardinal on Aug. 27, 2022.

Based on his own experience in retaining a canon lawyer to appeal his suspension, White chronicles how most canonical appeals to the Vatican by canceled priests are often a waste of time and money. Because Church leaders often undertake whitewashed investigations with predetermined conclusions, canceled priests, along with sex abuse victims, often find that the civil courts are their only recourse to achieving justice.

White helps readers understand tactics used by bishops to avoid paying abuse victims just compensation by offering lowball out-of-court settlements or filing for bankruptcy, which often allows dioceses to avoid discovery. While White reported hosting abuse victims who visited and stayed with him, one could hardly imagine McCarrick, Knestout, Wuerl or even Francis doing the same.

He and McCarrick were joined at the beach house by two men McCarrick simply introduced as 'Barry' and 'Mike.'

When Chicago's Fr. Paul John Kalchik read White's book, he was moved to write a letter to Bp. Knestout. Owing to the fact that Knestout was the former priest-secretary to the Church's most infamous serial predator who presided at Knestout's episcopal ordination, Kalchik questioned his qualifications to be elected to head the USCCB's Committee on Protection of Children and Young People.

As an adult victim of clerical sex abuse, knowing that bishops like McCarrick, Bransfield, Nienstedt and others were alleged to have preyed on seminarians and young priests more than minors, Kalchik called into question the scope of Knestout's committee when he wrote, "Limiting the scope of the committee to just address sexual predation of youth misses the mark."

White recounts the story of a seminarian who was sexually assaulted by McCarrick at his New Jersey beach house. In an effort to protect the victim's identity, he avoided mentioning that the seminarian recounted that he and McCarrick were joined at the beach house by two men McCarrick simply introduced as "Barry" and "Mike." It was not until years later that the former seminarian learned the real identities of McCarrick's "friends," who were both living and working in Washington, D.C.

Ordained by a Predator should make you both sad and mad. Anyone who reads it might have a hard time understanding why Catholics of the diocese of Richmond are not calling for Knestout's resignation, as happened with Cdl. Wuerl in Washington, D.C.; with Bp. Richard Malone in Buffalo, New York; with Abp. John Nienstedt in Saint Paul and Minneapolis, Minnesota; and currently with Bp. Richard Stika in Knoxville, Tennessee; all of whom were accused of either engaging in or covering up sexual abuse.

Hot off the press!

Fr. Mark White's book:
Ordained by a Predator — Becoming a Priest in the Middle of a Criminal Conspiracy

After reading this revealing exposé, one cannot help but recognize that White is a deeply spiritual, intelligent and dedicated priest who greatly misses his parishioners. His dedication and love for his flock explain why so many Catholics demonstrated on his behalf before the apostolic nunciature in Washington, D.C.

White, who finds himself in a state of limbo, wrote, "While I may have been railroaded into a hermit's life by one of the predator's protégés, I am not giving up." Strengthened by his faith, White said in an interview, "I know God is with me; I know he is guiding me. And I know this is something he is asking me to embrace."

Catholics may wish to support courageous, holy, canceled priests and seminarians by contributing to the Coalition for Canceled Priests or by giving to the Save Our Seminarians Fund.

Gene Thomas Gomulka is a sexual abuse victims' advocate, investigative reporter and screenwriter. A former Navy (O6) Captain/Chaplain, seminary instructor and diocesan Respect Life director, Gomulka was ordained a priest for the Altoona-Johnstown diocese in Pennsylvania and later made a Prelate of Honor (Monsignor) by St. John Paul II.