PORTLAND, Ore. (ChurchMilitant.com) - Pro-lifers are celebrating a victory in Oregon, as they watch a bill die that would've legalized the starvation of dementia patients.

Senate bill 494, passed by the Senate on June 8, was referred on Friday to Oregon's House Judiciary Committee, which was already closed for this legislative season. A staffer with the Oregon House Judiciary committee confirmed to Church Militant that this legal maneuver by Oregon House Speaker Tina Kotek effectively killed the bill.

Oregon Right to Life has been leading the fight to kill this deadly bill. Gayle Atteberry, executive director of the pro-life organization, was overjoyed. In a press release Monday, Atteberry remarked:

Had this bill become law, it would have been used to end the lives of innocent Oregonians, who are not in the active dying stage but are afflicted with mental illness. Thousands of Oregonians wrote to their legislators, expressing horror about this bill that exemplifies just how extreme Oregon's politicians have become.

Church Militant reached out to David Kilada, political director for Oregon Right to Life, who explained Kortek's manuever. He said when the Oregon Senate had passed the bill on June 8, they didn't know to which of two House committees the bill would be referred. The two possibilities were the House Rules Committee, which is still open until July 10, or the House Judiciary Committee, which was closed as of June 2.

He went on to say that the speaker of the house decided on Friday to send the bill to almost-certain death in the already-closed House Judiciary Committee. It'll remain there until this year's legislative session closes July 10. At that point, the bill will be "officially" dead.

The House of Representatives is known to be far more pro-life than the state senate. When the senate passed the "starvation" bill on June 8, it received only one Republican vote, from Sen. Jeff Kruse. Atteberry gave a shout-out to the pro-life senators who stood firm against the bill.

"We are so thankful to our pro-life Oregon senators who stood so strongly against SB494 and gave momentum to the opposition," exclaimed Atteberry, "which our pro-life House representatives then use to help send SB494 to a dead end."

Oregon Right to Life has fought hard to stop this bill. Atteberry described how the bill would've played out in practice if it had passed. "The reality is that it will remove current safeguards in Oregon's advance directive statute that protect conscious patients' access to ordinary food and water when they no longer have the ability to make decisions about their own care," he related.

Colm Willis testified in front of the senate committee that the bill, even as amended, still gave healthcare providers the legal right to withhold food and water from these patients — and against their will in some instances. The current version of SB494 "could allow a healthcare representative to make a life-ending decision for a person not in an end of life condition without his or her explicit consent," warned Willis.

Life-ending decisions now include the decision to administer food and water to patients. Speaking of mentally incompetent patients who can still eat naturally, Willis noted, "A person may be incompetent to make a complex medical decision for themselves but still may be competent to decide whether or not they want to eat."

Atteberry observed that the bill was being pushed by big insurance companies looking to save money, and is deceptively crafted. "This bill, written in a deceiving manner, has as its goal to save money at the expense of starving and dehydrating dementia and mentally ill patients to death," she remarked. 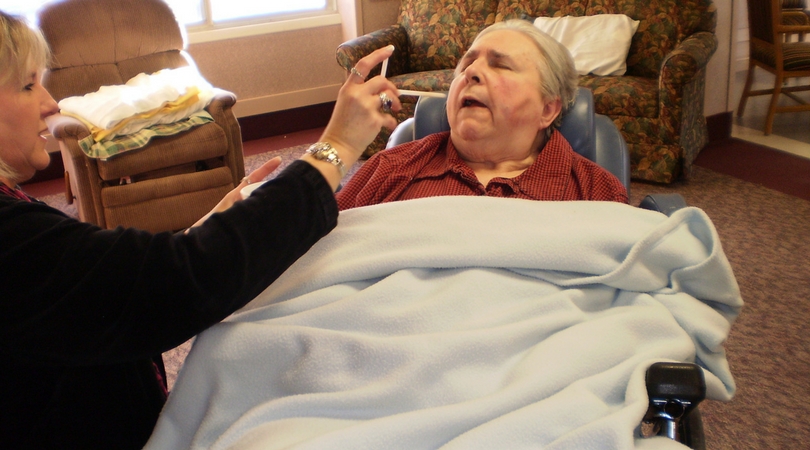