NEW YORK, July 28, 2015 (ChurchMilitant.com) - The organist at New York's famous Church of St. Agnes in midtown Manhattan will be marrying his gay partner this September, and the faithful await the archdiocese's response to the scandal.

Christopher Prestia was hired by parish priest Myles Murphy earlier this month, after the former parish organist and choirmaster James Wetzel — who had served at St. Agnes for five years — was fired over a disagreement over music. According to sources, Fr. Murphy disapproved of the polyphony Wetzel regularly offered, saying it was "too intellectual" for the laity, and asked Wetzel to start employing English hymnals. Wetzel disagreed, Fr. Murphy fired him, and the entire choir left in protest.

Prestia took over as choir master and organist July 8, and directs music each Sunday for the Traditional Latin Mass.

Prestia describes himself on the parish website as "an adult convert to Catholicism." He confirmed his new assignment on his publicly visible Facebook page, where he announced July 8 that he's "officially the musician-in-chief at St. Agnes Parish, New York City." He also confirmed his service at the Sunday Traditional Latin Mass: On July 12, he announced, "First ever Tridentine mass on my own in T minus 60 minutes! Pray for me!"

It's on this same Facebook page where Prestia mentions his homosexual partner. In a status update posted October 1, 2014, Prestia writes, "My gay fiance [sic] is wearing stripes and plaid."

The same Christopher Prestia who hosts this website, which is linked from his profile at St. Agnes' page, is also the one shown in this online wedding registry announcing his upcoming civil marriage to his partner Shane, to take place at St. Luke's Episcopal Church in Scranton, Pennsylvania on September 4, 2015.

According to sources close to the situation, Murphy was made aware of the scandal July 17, and at the time claimed to have known nothing about Prestia's sexual orientation or his upcoming gay "marriage." The archdiocese of New York was contacted soon afterward and made aware of the situation. As of today, more than 10 days later, the archdiocese is yet to issue a statement on the matter. ChurchMilitant.com also reached out to the archdiocese, but as of press time has received no response.

Prestia continues to direct music on Sundays, including this past Sunday, July 26.

Underlying this scandal are concerns from the faithful over parish leadership. Father Murphy was installed as pastor at St. Agnes in 2011, and parishioners claim he has evidenced hostility toward the Traditional community from the beginning.

According to Jolanta Idzik, a regular Traditional Latin Mass attendee at St. Agnes for more than a decade, who spoke with ChurchMilitant.com, Fr. Murphy has placed restrictions on how early priests and servers can arrive to prepare for the 11 a.m. Sunday Mass and how late they can leave, even publicly berating them if they stay several minutes longer than usual.

After a visiting priest from the Priestly Fraternity of St. Peter had finished offering the Usus antiquior on a Sunday last June, no sooner had he entered the sacristy than Fr. Murphy announced from the microphone to the entire church that the Mass had gone on too long and that everyone was required to exit immediately. Idzik said this incident was "very embarrassing" to the Traditional community.

This unwelcoming attitude was confirmed by a source (who requested to remain anonymous for fear of retaliation):

Father Murphy has placed a limit on the time of the Mass, he does not allow the servers/priests to arrive in the sacristy too early, and as soon as Mass is over they have to leave immediately. He has inundated the sanctuary with heave lecterns that he does not allow to be moved for the Latin Mass (even though they are in the way).

He continued, "The attendance at St. Agnes has dropped greatly because the (Latin Mass) people do not feel welcome at all. The servers walk on eggshells every time they are there because they never know when the pastor will blow up at them."

An occasional altar server at St. Agnes echoed these concerns, telling ChurchMilitant.com that on one occasion he was brusquely told to leave when he arrived a few minutes early to prepare for the 11 a.m. Sunday Mass. 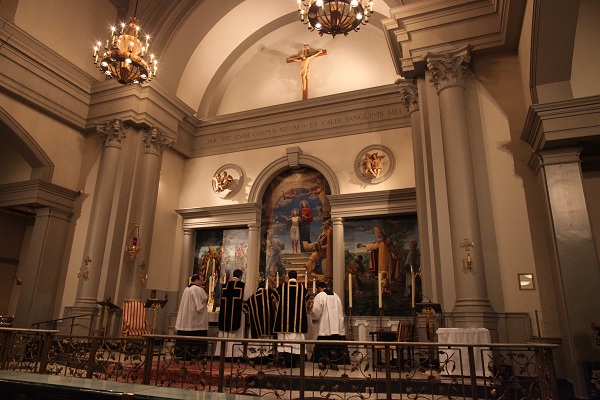 Other petty behavior evidenced by Murphy includes consistently shutting off the air conditioning during the Tridentine Mass, only to turn it on for the Mass offered immediately afterward. According to Idzik, the visiting priests and other parishioners routinely notice stifling temperatures during the Missa Cantata, but cool temperatures at all other Masses.

Monique Mirouze, occasional visitor at St. Agnes, once witnessed Murphy appearing at the back of the Church, just before the start of the 11 a.m. Mass, to announce that the air conditioning had broken down. Once the Mass ended, before the servers had even entered the sacristy, Murphy re-appeared, announcing that the air conditioning had been "fixed." A priest who used to offer Mass at St. Agnes confirmed Murphy had done this on several occasions.

Mirouze was also a parishioner at Murphy's former assignment, St. Michael's church, where he was parish priest from 2005–2011. Her observations about the priest's behavior then are consistent with those of eyewitnesses who spoke with us. In her words, "He absolutely disregarded us."

In addition to frequently berating a Nigerian priest who offered Mass at St. Michael's, Fr. Murphy was also in the habit of scolding parishioners. Mirouze witnessed him once castigating an altar server for "walking like a Nazi," and then criticizing a female lector in front of a group for failing to do the readings properly. The woman ended up in tears. Longtime parishioners who routinely volunteered their time to clean and beautify the parish ended up leaving because of the priest.

This behavior, coupled with recent revelations about the parish organist's upcoming gay "marriage," have caused the Traditional community at St. Agnes to drop sharply. Speaking of weekly attendance at the Missa Cantata, an altar server who spoke with us said, "Before he arrived I believe there was probably a hundred." Now that number has gone down to under half — last Sunday, only 38 people attended the Mass.

Saint Agnes Church is known world-wide for its beautiful liturgy and music, as well as its historical association with Ven. Abp. Fulton J. Sheen, who preached there on and off for more than 40 years. On October 7, 1980, in honor of Sheen's connection to the church, New York City mayor Ed Koch declared East 43rd Street in front of the Church "Archbishop Fulton J. Sheen Place."

Saint Agnes also has the longest-running and most well-respected Traditional community in the New York archdiocese, whose history stretches back more than two decades. After Pope St. John Paul II's 1988 motu proprio permitting celebration of the Tridentine Mass, then-pastor Msgr. Eugene V. Clark implemented a Sunday morning Missa Cantata. Since that time the Missa Cantata has been offered continuously every Sunday at St. Agnes without interruption.

Now the community is deeply concerned its days are numbered.

All of the sources agree on one thing: Fr. Murphy is inordinately focused on finances. According to parishioners, money is a constant topic in his homilies, and shortly after his installation at St. Agnes, he moved two money collection boxes to a prominently visible place in the center of the main aisle. He has also placed signs in front of shrines and statues admonishing the faithful not to "offend Our Lord" by failing to donate money.

Although ChurchMilitant.com was unable to obtain a copy of parish financial records, Murphy's excessive focus on money seems to reveal worries about the church's financial status. And the dwindling numbers of the Traditional community are hardly helping with the collection plate.

The hiring of an openly gay parish organist to direct music for the Missa Cantata is, some believe, just the latest in a long string of incidents evidencing Murphy's animus toward the community.

ChurchMilitant.com reached out to Fr. Murphy last week for comment, but as of press time, he has not responded to our queries.

Editor's note, July 28, 2015: The article was revised to reflect the fact that parish organist James Wetzel was fired by Fr. Myles Murphy.