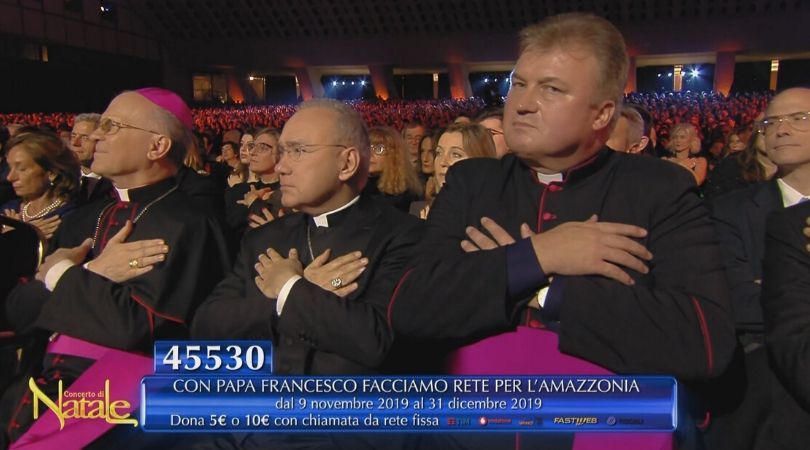 ROME (ChurchMilitant.com) - Catholics are outraged over the re-appearance of "Pachamama" in the Vatican at a Christmas concert sponsored by the Holy See's Congregation for Catholic Education.

The Mother Earth goddess, worshipped by the indigenous people of the Amazon, was invoked by a Latin American woman before an audience of 5,000, while two million watched on television in Italy and around the world on Christmas Eve and the afternoon of Christmas day.

An indigenous woman asked the audience to cross their arms over their chest and to feel a strong vibration: 'the heart of Mother Earth.'

At the live Dec. 14 charity performance titled "Let's network for the Amazon," an indigenous woman dressed in native garb asked the audience to cross their arms over their chest and to feel a strong vibration, explaining that this is "your heart" but also "the heart of Mother Earth."

A Catholic priest in his clerical collar who was hosting the show at the Hall of the Pontifical Audiences (Aula Paolo VI) asked the Spanish-speaking native to tell the audience "about your relationship with Mother Earth."

Cardinals and bishops seated in the front row, followed by the entire audience, responded enthusiastically by crossing their arms and listening reverently to the spiel on Pachamama.

"On the other side, where there is silence, is the Spirit," the indigenous woman explained. "The Spirit who allows you to feel the message of the Mother." She continued:

For us indigenous peoples, Mother Earth, the Hicha Gueia, is everything. It is the Mother who gives us food, sacred water, medicinal plants; and what we offer to the earth is to pay homage to her, the placenta and the first hair we cut. For us, Mother Earth is fundamental, our connection with her is constant, how the pulse feels, how the heart feels.

A Catholic website shot back: "So now people have been taught to cross their arms, feel their heart, and channel their inner Gaia."

For us indigenous peoples, Mother Earth, the Hicha Gueia, is everything.

Another Catholic website noted that "Gueia" was a synonym for Pachamama and, in reality, a "demon."

The controversial act ended with the priest saying that the woman's invocation of Pachamama reminded him of Exodus 3:5, where "God commands Moses to take off his sandals because by the presence of God the Lord had sanctified that place."

"On the eve of the birth of Jesus Christ, we were able to see an Indian (Latin American) lady teaching prelates, bishops, audience, presenter and television viewers, by crossing her arms over her chest, in a kind of ritual that the shepherds called by the angel are unlikely to have performed," commented Marco Tosatti, Italian journalist and Vatican expert.

"But it is not true that pagan rites were held in the Vatican, during the Amazon Synod, when the Pachamama [idols] were carried in procession in St. Peter's and then venerated in the Church of Santa Maria in Traspontina?" he asked.

Slamming Pope Francis' earlier comments on the "rigidity" of traditionalist Catholics, Tosatti added: "Instead, to have on Christmas Eve, in the Vatican, carried on global television, a lady who teaches the bishops to 'feel the spirit that allows you to hear the message' of Mother Earth. Even at Christmas. Can you say that you can't take any more of these antics, or does this seem rigid too?"

A day before the concert, Pope Francis reminded the performers that "all of us are called to build a 'global village of education,' weaving a web of human relationships, for these are the best antidote to all forms of discrimination, violence and bullying."

"In this village, education and art meet through the languages of music and poetry, painting and sculpture, theatre and cinema," he continued.

Proceeds from the Vatican Christmas concert will go to help protect the Amazon and support indigenous communities in the rainforest, including a Salesian project helping communities in northwestern Brazil and a Scholas Occurrentes awareness-raising campaign in 450,000 schools around the world promoting reforestation.

The concert also featured U.S. Grammy Award-winning singer Lionel Richie, songwriter Bonnie Tyler and Susan Boyle — a 2009 finalist on Britain's Got Talent — as well as several Italian singers and musicians, including the Vatican's police band, according to the Vatican Congregation for Catholic Education.

Tobin previously served on the Congregation for Institutes of Consecrated Life and Societies of Apostolic Life, but his stint was shortlived, removed by Pope Benedict XVI from his Vatican post after only two years and sent back to the United States to be archbishop of Indianapolis, Indiana.

In 2018, Tobin bewildered followers by tweeting, "Supposed to be airborne in 10 minutes. Nighty-night, baby. I love you." Within hours he deleted the tweet, apologizing for accidentally publishing something meant for his "baby sister." Many Catholics, however, continue to be skeptical about his explanation.

Tobin is among a handful of prelates who have publicly lauded the work of homosexualist Jesuit Fr. James Martin as well as publicly criticize the dubia cardinals, denouncing critics of Amoris Laetitia as "naïve at best."

"I conveyed today in the Vatican in front of Pope Francis messages of love, peace and tolerance among religions and people which represent my culture, community, nation and Arabic heritage," Al Jassmi posted on social media, adding, "globalization rises from localization and from the artist's throat." 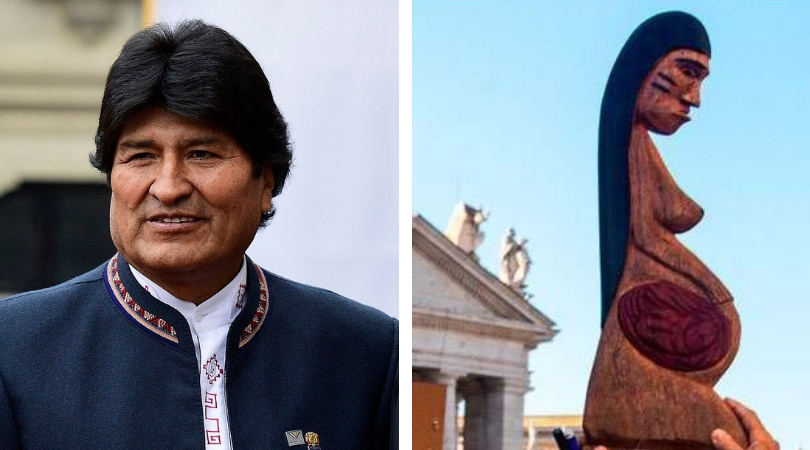