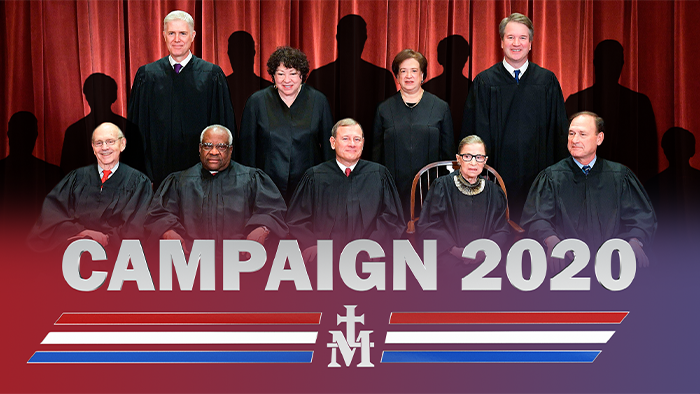 Even though the vice presidential debate moderator Susan Page would not pose the question many Americans were wondering about, Vice President Pence did.

"When you speak about the Supreme Court, though, I think the American people really deserve an answer, Senator Harris. Are you and Joe Biden going to pack the court if Judge Amy Coney Barrett is confirmed?" Pence asked.

The same day, The Washington Examiner reports the results of its own polling showing that registered voters oppose court packing 47% to 34%.

The day after the debate, Biden and Harris are campaigning in Arizona. This time, reporters pose the question. Will Biden pack the court?

"You'll know my opinion on court packing when the election is over," Biden countered.

Biden is campaigning in Las Vegas and another reporter presses him.

He tells Biden, the number one thing viewers ask about is whether Biden favors packing the Supreme Court. Here's what happened.

Biden: No, they don't deserve ... I'm gonna play his game. He'd love me to talk about ... I've already said something on packing the court. He'd love that to be the discussion instead of what he's doing now.

Biden's response reflects a new strategy by the campaign: make the argument that it is Trump "packing the court" simply by filling the current vacancy.

"Packing the court" is a commonly used term for the idea of adding more justices to the U.S. Supreme Court — beyond the current number of nine — in order to further a specific political agenda. FDR tried it in the 1930s because the Supreme Court was blocking large portions of his New Deal legislation.

The Constitution does not specify the number of Supreme Court justices, and the number fluctuated slightly in our nation's early history. But since 1869, the number has held steady at nine justices.

Court packing is about upping the number of justices. Democrats' current tactic of equating the filling of a vacancy on the historic nine-member panel with adding more seats by court packing is deliberately misleading.