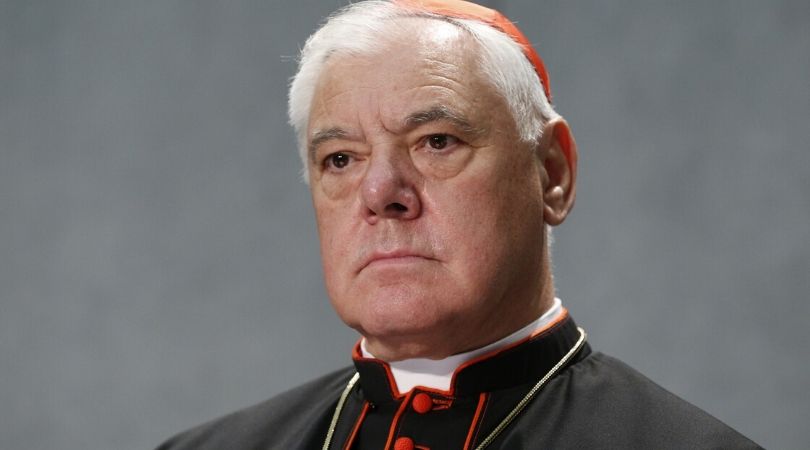 WASHINGTON, D.C. (ChurchMilitant.com) - The Vatican's former doctrine chief is echoing the warnings of other prelates, priests and laypeople, warning of global players seeking to exploit the Wuhan virus to stifle the mission of the Church.

Cardinal Gerhard Müller, a signer of Abp. Carlo Maria Viganò's May 7 "Appeal for the Church and the World to Catholics ad all people of good will," discussed the topic of the pandemic being used to halt the Church's sacramental life and worship on The World Over last week.

Though bishops cannot speak to medical aspects of the Wuhan virus professionally, Cdl. Müller said, they must "speak against the instrumentalization of this virus ― of this big world crisis, global crisis ― by some dictatorial states or by other ideological groups which want to take the opportunity to suppress the Church and make a breakdown of the sacramental life of the Church."

"The state as such cannot say, 'We forbid worshipping,' ― we are not a state Church," Müller continued. "We have fundamental religious rights as human rights and the state must respect these rights … it [the State] can only interfere in the medical security of the people, but it is absolutely contradictory to open the supermarkets and to close the church."

The prelate noted that the Supreme Court in France ruled that Churches must remain open if other places such as supermarkets are open.

In response to the defense that governors and states merely wish to keep everybody safe, Müller said, "In some cases, it could be right," but added, "nobody has a right to forbid priests and shepherds to visit the people who are dying or are very ill."

"The security for your life is not the only value," he added. "We have all the spiritual values. … We have other illnesses and other dangers in our life and we can not remain absolutely in our home."

Preaching the Kingdom of God, Not an Earthly Utopia

Cardinal Müller was asked about recent comments by Cdl. Robert Sarah, who said:

The Church has committed herself to the struggles for a better world. She has been right to support ecology, peace and the equitable distribution of wealth. These struggles are just but they could make us forget the words of Jesus: "My kingdom is not of this world." … Covid-19 laid bare an insidious disease that was eating away at the Catholic Church: she thought that she was "of this world."

Müller affirmed that the Church is cooperating with secular institutions for justice, peace and ecology, but reiterated, "our main mission is to preach the Kingdom of God … [love of God and neighbor] … and to celebrate the sacraments to give grace, to give consolation and to give hope, and it is clear that the human being is not living by bread alone but by the word that is coming from God."

Regarding the fifth anniversary of Pope Francis' environmental encyclical Laudato Si, Cdl. Müller said the document's message is that God is a creator and humanity has a common responsibility to care for this world "but not only for this world for the short time of our life here in this world … we have a big responsibility for salvation, for [the] eternal life of everybody." With this as the focus, Müller spoke to the importance of evangelization and the impossibility of establishing a utopia in this present life.

Appeal for the Church and the World

Signed by over 40,000 prelates, priests and lay professionals, Viganò's "Appeal" states that "under the pretext of the Covid-19 epidemic, the inalienable rights of citizens have in many cases been violated and their fundamental freedoms, including the exercise of freedom of worship, expression and movement, have been disproportionately and unjustifiably restricted."

While "authoritative voices in the world of science and medicine confirm that the media's alarmism about Covid-19 appears to be absolutely unjustified," the Vatican whistleblower warned, "there are powers interested in creating panic among the world's population with the sole aim of permanently imposing unacceptable forms of restriction on freedoms, of controlling people and of tracking their movements."

Under the pretext of the Covid-19 epidemic, the inalienable rights of citizens have in many cases been violated and their fundamental freedoms, including the exercise of freedom of worship, expression and movement, have been disproportionately and unjustifiably restricted.

These controlling and repressive measures are "a disturbing prelude to the realization of a world government beyond all control," according to the document.

The purpose of the declaration, according to Italian journalist Marco Tosatti, is "to break the media silence that weighs on our present, especially with regard to individual freedoms and personal rights, threatened by forms of censorship and control," as well as, "to demand equal dignity of discussion in the scientific community without letting ourselves be guided by economic or ideological interests; and to remind rulers of their grave responsibilities for the common good."

The appeal has yet to receive official acknowledgment from the Vatican or the U.S. Conference of Catholic Bishops.