This comes amid a hospital protest demanding infant's release

LIVERPOOL, England (ChurchMilitant.com) - The parents of a sick British infant are returning to court to appeal a ruling that would have pulled the plug this Friday.

The legal team of Tom Evans and Kate James, parents of Alfie Evans, the 23-month-old child with a rare degenerative neurological condition, issued a press release Friday following an attempt on Thursday by the parents to remove their sick toddler from Alder Hey Children's Hospital in Liverpool, England.

This came after a hearing on Wednesday at London's High Court for Evans despite a week-old request for lawyers to prepare paperwork. Justice Anthony Hayden issued a death sentence for Friday while describing Alfie's life as "profoundly unfair."

Alfie's parents appealed the decision, requesting the court to allow the hospital to release their son, so he can receive further treatment for his undiagnosed condition at Bambino Gesu hospital in Rome.

On Thursday, a court order was issued, requiring Alfie to be on his feeding and breathing tubes until Monday, when the family's appeal will be heard before the British Court of Appeal.

"Judge Hayden has denied that Alfie is imprisoned, rejected (but not dismissed) claims of habeas corpus (false imprisonment) and was silent in court when barrister Paul Diamond stated that Tom and Kate had the right to walk out of the hospital with Alfie," said the press release.

Alfie's parents' lawyer, Paul Diamond of the Christian Legal Centre's Standing Counsel, argued at the Wednesday hearing that Alder Hey has no right to hold the sick infant against the wish of the parents. Diamond said Alfie's parents have "primary responsibility for their son and full parental rights," allowing them to remove him from the hospital.

Thus the legal conclusions logically followed. The parents exercised their parental rights yesterday, 12 April, formally revoking the Duty of Care from Alder Hey Hospital and its doctors and transferred Duty of Care to an air transport specialist, a qualified intensive care doctor from Poland for transport to the Bambino Gesù Children's Hospital in Rome.

He continued, "Alder Hey have phoned the police to stop me from taking my son out of the hospital. This is my son. Look at my healthy, healthy young boy who is undiagnosed, who is certainly not dying."

The video included Evans suggesting people stand outside and pressure the hospital to release Alfie. The video garnered more than 730,000 views and a crowd of about 2,000 protesters. "They demanded Alfie's release and would not allow the air ambulance team to leave for several hours, demanding that they take Alfie with them," said the press release.

Alder Hey released a statement regarding the crowd size which they considered a "significant disruption, due to a large protest concerning one of our patients."

Evans and James petitioned the High Court in Liverpool to move Alfie to Bambino Gesu Hospital for treatment, but Hayden prevented the couple from doing so, ruling in February that their son's life support should be turned off. A British appeals court also upheld the ruling, allowing the sick toddler to die.

The European Court of Human Rights (ECHR) also upheld the ruling on March 28 that the hospital could withdraw "life support" after Alfie's parents appealed it in the High Court in Liverpool. The ECHR ruling has been upheld by the court of appeal judges and Supreme Court justices.

I have the right to take my son out of this hospital.

On April 4, Pope Francis tweeted his support for the sick infant: "It is my sincere hope that everything necessary may be done in order to continue compassionately accompanying little Alfie Evans and that the deep suffering of his parents may be heard. I am praying for Alfie, for his family and for all who are involved." 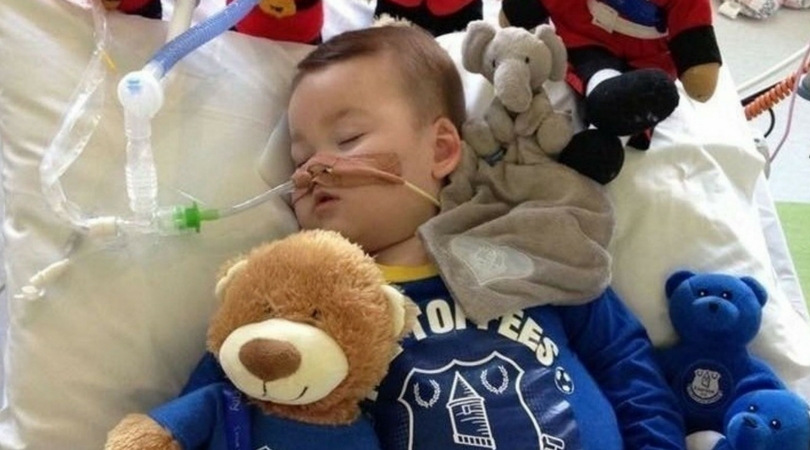