‘Party of Death’ Leaders Get Vocal on Abortion 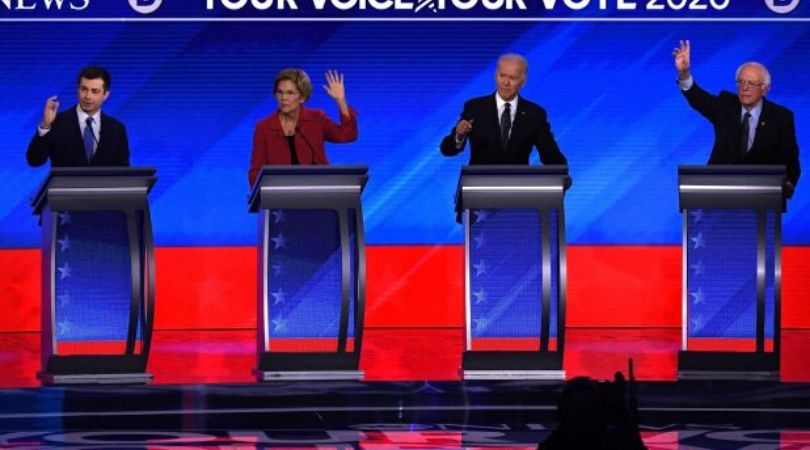 Presidential candidates leave no ambiguity on protecting the most vulnerable

DURHAM, N.H. (ChurchMilitant.com) - The Party of Death has made it clear: There is no room anymore in the Democratic Party for those who respect life.

The party, whose official platform includes abortion on demand, and whose state legislatures have been doubling down of late on legalizing child-murder up to (and beyond) birth, has left no room for Democrats who respect human life — this from Catholic theologian Charles Camosy, who recently resigned from his post as member of the board of directors for Democrats for Life of America (DFLA).

The Democratic Party's extreme support of abortion, he stated, left him "no choice" but to leave his party. "Anything even hinting that abortion is less than good now violates party orthodoxy," Camosy wrote in an op-ed for the New York Post.

Presidential candidate Andrew Yang found this out the hard way. In a presidential candidate forum in Durham, New Hampshire Saturday, Yang was asked about his view on abortion. Though he toed the party line that abortion is a woman's choice and should be legal throughout pregnancy, his phrasing sparked anger among Democrats.

"I think we have to get back to the point where no one is suggesting we celebrate an abortion at any point in the pregnancy," Yang said. "But it's a tragedy to me if someone decides that they don't want to have a child. ... Celebrating children and family — these are universal human values."

Celebrating children and family — these are universal human values.

This earned Yang a chorus of backlash on social media, with progressives calling for him to drop out of the race. Some accused him of "shaming" women and "demonizing" abortion with his "dangerous" rhetoric.

There was no such subtlety of balance with Bernie Sanders. At the Durham forum, when asked if there is "such a thing as a pro-life Democrat in your vision of the party," Sanders responded: "I think being pro-choice is an absolutely essential part of being a Democrat, if you're asking me." He continued his thought: "By this time in history, I think, when we talk about what a Democrat is, I think being pro-choice is an essential part of that."

Party leaders are in unison on this point. In 2017, Tom Perez, chairman of the Democratic Party — and a self-identified Catholic — said that support for abortion among Democrats is not negotiable. "Every Democrat, like every American," he said, "should support a woman's right to make her own choices about her body and her health. That is not negotiable, and should not change city by city or state by state."

At a recent Fox News town hall in Iowa, Kristen Day of Democrats for Life of America, who introduced herself as "a proud pro-life Democrat," directly asked presidential candidate Pete Buttigieg whether he would support "more moderate platform language" to ensure that the party "really does include everybody" — including pro-life advocates.

After explaining his own pro-abortion position to her, she repeated the gist of her question, which was whether he would accept language in the party platform that would include those who disagree with its radical pro-abortion stand. He again answered in the negative.

Day appeared on Fox & Friends the following Monday and expressed her disappointment. "The fact that he took that opportunity to double down and sort of alienate pro-life Democrats even further," Day said, "just showed me that he did not — he does not want our vote."

Re-written every four years, the language supporting abortion in the Democratic Party platform has been getting less and less inclusive. Since 2016 it reads:

We believe unequivocally, like the majority of Americans, that every woman should have access to quality reproductive health care services, including safe and legal abortion — regardless of where she lives, how much money she makes or how she is insured. We believe that reproductive health is core to women's, men's and young people's health and well-being. We will continue to stand up to Republican efforts to defund Planned Parenthood.

Further, with regard to exporting our Culture of Death to the rest of the world, the platform supports "American assistance to provide safe, legal abortion throughout the developing world."

It is becoming clear that Camosy, Day and the many other registered Democrats across America who do not support abortion until birth and our tax money paying for it, have a big decision to make with regard to their registered party affiliation.