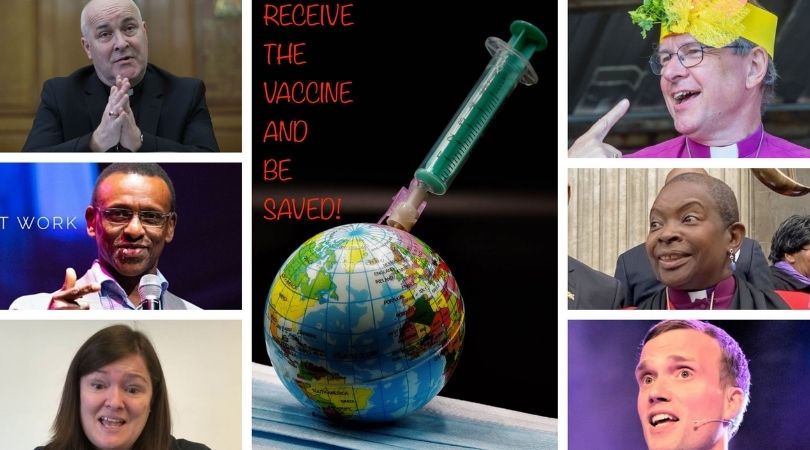 LONDON, England (ChurchMilitant.com) - Proclaiming the "good news of the COVID vaccines," a Christian advocacy group funded by pro-abortion and pro-LGBT sponsors is recruiting church leaders to proselytize to people who may have moral or safety concerns about the experimental jab.

In a two-minute propaganda video that has been met with almost universal opprobrium on social media, England's Christian leaders issue an altar call for all to "take the vaccine when we are offered it."

The Oak Foundation, which ranks fifth in the 2018 list of top European private donors (after the pro-abortion Bill and Melinda Gates Foundation), commits itself to funding "organizations that provide or advocate for the right to comprehensive sexual and reproductive rights [i.e., abortion] for all women and girls in crisis situations."

In the Your Neighbor video, liberal Anglican bishops join evangelicals to ecumenically trumpet the "gospel of the jab," with revivalist passion and evangelical conviction painting a "salvation history" narrative — moving from the darkness of the virus to the light of the vaccine.

Leaders from the Evangelical Alliance (EA), black churches and charismatic conventicles, like New Wine and Hillsong, join Baptists, Methodists and Salvationists in eschatologically urging viewers to "hasten the day when we can all be together again" by getting jabbed.

"I was dismayed to see such a host of evangelical leaders collaborating in a video like this," Dave Brennan, executive director of pro-life Brephos, told Church Militant. "This, apparently, is how they 'give hope' to the nation at this critical time — not by commending Christ as our only sure hope but by commending the abortion-tainted vaccine."

Lamenting that "ethical concerns held by serious Christians are being trampled underfoot as these leaders urge everyone to get the jab regardless of their moral convictions," Brennan, an associate of the Centre for Bio-Ethical Reform (CBRUK), added:

This is the triumph of government propaganda over the Christian conscience, accelerated by Christian leaders who have been recruited to repurpose the language of Scripture to support the State's program — not the first time we've seen such a thing happen in history.

Even if we were to lay aside ethical and conscience issues, how can we jump so unquestioningly on the bandwagon of speaking as though the vaccine is our salvation, our only way to a better world? This is the gospel of Bill Gates, not the gospel of Jesus Christ.

The vaccine-promoting video begins with EA chief Gavin Calver announcing the bad news of COVID turning our "world upside down, taking far too many of our loved ones far too soon."

Calver's colleagues chime in with alarmist statistics of COVID-cataclysm, climaxing with a mawkish Siân Rees blaming COVID for "exploiting and increasing the existing inequalities in our society."

Anglican bishop Philip Mounstephen, in a rhetorical shift reminiscent of a Billy Graham crusade, then brings in the good news reminding viewers that "as followers of Jesus Christ, we are to be people of hope."

Pro-LGBT archbishop of York Stephen Cottrell, a top-heavy bureaucrat criticized for cutting 61 clergy posts in his former diocese of Chelmsford, climactically issues the altar call to "take the vaccine" as "one of the best and fastest routes out of this terrible pandemic."

They have swallowed whole the toxic narrative that liberty-destroying, business-crushing lockdowns are necessary, and that the only way out is for the whole population to receive injections of experimental mRNA or genetically modified chimp flu, which will pave the way for the globalists' tyrannical system of "vaccine passports."

Kurten, a committed Christian, blasted the "modern parodies of leadership" who "close churches for a disease most overcome with their immune system but open them to inject people with serum made in cell lines from aborted babies," contrasting them with "Christian leaders during the Black Death who kept churches open as refuges for the sick."

After the altar call, the vaccine-plugging video shifts homiletical gears and begins attempting to persuade vaccine rejectors. Bishop Paul Butler of Durham condescendingly addresses as "understandable" the "fears people might have" because "these vaccines are new."

"We need to reassure them that the vaccine is safe and effective," Jude Levermore, head of mission for the Methodist Church in Britain, presumptuously proclaims.

They have swallowed the toxic narrative that the only way out is for everyone to receive jabs of experimental mRNA or genetically modified chimp flu.

Levermore is followed by Salvationist Anthony Cotterill, who claims that the shots have been "robustly tested by some of the world's best scientists" — a claim that has been even more robustly contested by top virologists, immunologists and epidemiologists.

Even the former chief scientist and vice president of Pfizer, Michael Yeadon, has emphatically stated:

There is absolutely no need for vaccines to extinguish the pandemic. You do not vaccinate people who aren't at risk from the disease. You also don't set about planning to vaccinate millions of fit and healthy people with a vaccine that hasn't been extensively tested on human subjects.

Other vaccine evangelists in the video urge viewers to do their "research" but only by speaking to doctors and health professionals from the state-funded National Health Service (NHS).

The final appeal to authority — a classical logical fallacy — is made by Rose Hudson-Wilkin, the Marxist Black-Lives-Matter-supporting female bishop of Dover: "If the vaccine was good enough for Her Majesty, it's good enough for me."

According to Buckingham Palace, Queen Elizabeth and Prince Philip took the jab in January.

Hundreds on social media excoriated the church leaders for "consciences seared with hot irons." Eviscerating the video as "appalling government propaganda," believers and secular respondents accused the pastors of being "co-opted by big pharma."

Members of the public asked church leaders to provide long-term studies to back up claims of safety, pointed out that trials ended only in 2023; they further challenged the vaccine apologists to account for the numerous deaths following the experimental jab.

"Does being religious qualify people to give scientific advice and push people into taking medical treatments?" a non-believer asked. "Another day, another bandwagon," another mocked.

As of press time, hardly any of the responses on Your Neighbor's Twitter feed have been positive. Church Militant asked Gavin Calver for comment but received no reply.

Surveying the responses, Brennan, one of the lone British pro-life voices cautioning against experimental vaccines, mourned the loss of courageous leadership in the British church: "We are no longer leading; we are following. No longer prophets, but puppets."