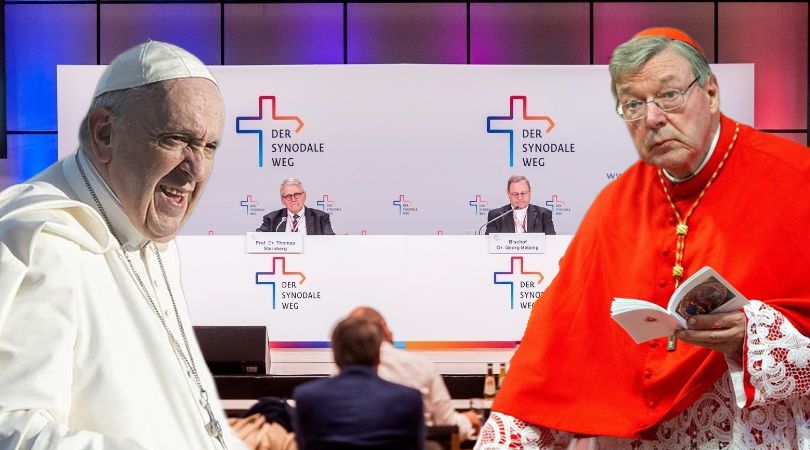 VATICAN CITY (ChurchMilitant.com) - Cardinal George Pell is asking Pope Francis to rein in heretical German bishops by reinforcing Catholic teaching on the all-male priesthood and the depravity of sodomy.

"Undoubtedly, the Holy Father will speak, will have to speak, on this matter to clarify and reiterate the tradition," Pell told Dr. Gavin Ashenden, former chaplain to Queen Elizabeth II, in an interview released Thursday for the Catholic Herald's new Merely Catholic podcast.

"I have great confidence in the successor of Peter," the cardinal insisted. "Unlike the Orthodox and the Anglican churches, the Catholic Church has an instrument we believe ordained by God — Peter, the rock man."

"The special role of the papacy is to maintain the purity of the apostolic tradition and the unity of the Church around that tradition. So I'm confident that the Holy Father will speak," Pell emphasized.

"On the question of women priests or homosexual activity, the situation is not muddy and unclear where people can choose from a variety of options," the outspoken cardinal stressed, drawing Francis' attention to the Fraternal Open Letter of Correction addressed to Germany's errant Synodal Way.

The letter, published during Holy Week, is signed by over 85 bishops from around the world — who warn that the radical changes proposed by the Synodal Way "will inevitably result" in schism. The letter slams the Synodal Way for displaying "more submission and obedience to the world and ideologies than to Jesus Christ as Lord and Savior."

Pell said the global bishops' letter was meant to encourage and reassure the Holy Father and the Congregation for the Doctrine of the Faith "that the overwhelming majority of Catholic bishops throughout the world stand with the Tradition."

We appeal to Christ — not to sociology or medicine.

The Australian cardinal explained that the letter was "an enormously important initiative" because "it reminds our people that, for example, on the question of women priests or homosexual activity, the situation is not muddy and unclear where people can choose from a variety of options."

"The basic teachings are very, very clear," but, "more fundamentally, our German brothers studiously ignore this," Pell, who is known for his orthodoxy, lamented, citing the Synodal Way's defiance of the Catechism of the Catholic Church on core issues.

Pell reported a conversation between two Italian grandmothers in which one was talking about her grandson entering into a homosexual partnership, to which the other grandmother responded, saying, "Ah! Even the Church now says that's okay."

Church Militant reports on Cdl. Pell's release from prison after being falsely accused of child abuse

"Well, we have to speak to make it clear that that is not the Christian teaching," the straight-talking prelate reiterated. Moreover, he said, "heteronormativity is still the basic position of most of our society and absolutely necessary for the health of our society."

When asked about how Catholics were to discern false teaching, Pell answered:

It's quite foundational and quite simple. We appeal to Christ, we appeal to revelation, to our Judeo-Christian tradition and not to sociology or medicine. What weight do we give to the teaching of Jesus and the Apostles? It's a basic challenge to face.

It's a question as to whether you believe we stand under the apostolic tradition or are its masters. Do we feel free to reject the teachings of St. Paul? Do we feel like going to do that, or does revelation and the teachings of Jesus and the Apostles have a special authority for us?

Pell explained that the German Synodal Way was dominated by bureaucrats and bishops "heading in the wrong direction" who were "very, very concerned about the decline of numbers in the German church and by the decline of practice."

The special role of the papacy is to maintain the purity of the apostolic tradition.

"But bizarrely, they think that, by adopting the teachings of the world around them, they are going to help the Church. History is unanimous in demonstrating that this is absolutely disastrous," he stressed, adding, "They're making a bad situation worse."

The "aims of the Synodal Way need to be clarified, as they were not clear at the moment," Pell observed. Rather than "listening to the voice of the Spirit," the world, the flesh and the Devil are in danger of hijacking in the synodal process, he added.

The cardinal traced the current disintegration of society to "family disintegration" and "the revolutionary social consequences of the pill," as elucidated by American sociologist Mary Eberstadt in her book Adam and Eve After the Pill: Paradoxes of The Sexual Revolution.

Hailing Pope Paul VI's anti-contraception encyclical Humanae Vitae as a "prophetic document "because it foretold the current difficulties," Pell noted how apologists for the birth control pill said it would "stabilize family life, help marriages [and] take off the pressure," but "it's done the complete opposite of that."

Pell further underscored the centrality of the Catholic Church as a "bulwark" in the current culture wars being waged against Judeo-Christian civilization, arguing that people were buying into the "social teachings of the Marxists."

"We've got 20 Confucius institutes in Australian universities. We've got quite a number of courses studying Islam. There was no objection to any of that. But the Ramsey Foundation wanted to start three courses on the study of Western civilization. And there was a ferocious opposition," he remarked.

"You can study anything except the glories and the tragedies of our own situation," he lamented. "We're outnumbered, metaphorically speaking, we're outgunned and that's the general context in which we find ourselves."

"There are many, many more people who have had it much more difficult than I have," Pell said, responding to a question on how he coped during his time in prison.

"We have an enormous advantage over the secularists when we approach suffering. They can't escape it either. But they've got no explanation for it. Nothing good, for them, can come from suffering," he concluded.