During the consecration, he asked God's forgiveness "for all the transgressions I may have committed in the past, all those committed by the Republic in the past, and for all those decisions that may have been made contrary to his commandments, and I ask for his help in changing everything that separates us from Him." Many influential political and business leaders attended the conference, including Luz Salgado, the president of Peru's congress.

The organizer of the event, Aldo Bertello Costa, stated the purpose of the breakfast was to "bring to all Peruvians a message of optimism and reconciliation." The theme of the prayer breakfast was "The Mercy of the Love of God," a fitting theme consonant with Pope Francis' declaration of the Year of mercy. President Kuczynski is following in the footsteps of Ecuadorian president Gabriel Garcia Moreno, a devout Catholic who in 1874 consecrated his country to the Sacred Heart of Jesus.
Father Luis Gaspar, judicial vicar and member of the Ecclesiastical Tribunal of the archdiocese of Lima, tweeted on the occasion: "Today, October 21, during the National Day of Prayer, PPK [Pedro Pablo Kuczynski] consecrated Peru to the Sacred Heart of Jesus and the Immaculate Heart of Mary." 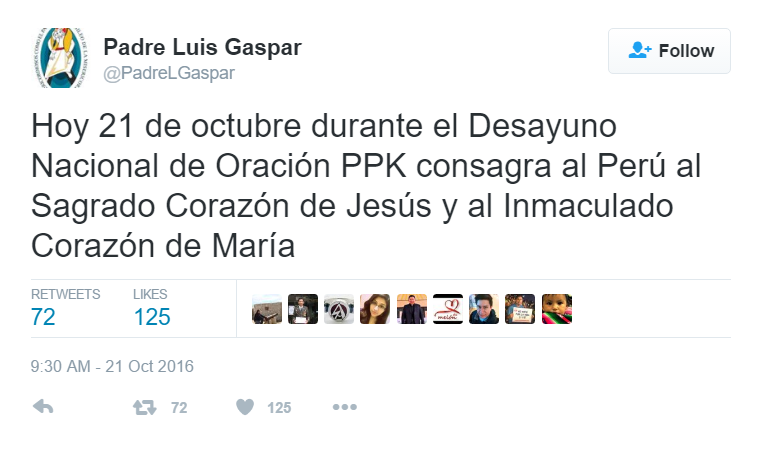 The Sacred Heart devotion began with St. Margaret Mary Alacoque, a French nun who started receiving revelations in 1672 from Jesus Christ on the importance of devotion to His Heart, which represented His "burning love" for mankind. During the course of these visions, Jesus told St, Margaret Mary to tell King Louis XIV, the king of France, to consecrate France to His Sacred Heart and to build a chapel in honor of the Sacred Heart, so as to bring France closer to Him and glorify France as the Queen of Catholic nations.

When St. Margaret Mary told King Louis XIV of Our Lord's request in 1689, he refused to perform the consecration or build the chapel. One hundred years later, the French Revolution began with the storming of the Bastille, the result being the overthrow of the Catholic monarchy and the regicide of King Louis XVI and Queen Marie Antoinette.