MELBOURNE, Victoria (ChurchMilitant.com) - After an Australian court found a Catholic cardinal guilty of sex abuse, some are raising questions about the verdict.

Cardinal George Pell was found guilty on charges of sexually abusing two 13-year-old choirboys in December 1996 at St. Patrick's Cathedral in Melbourne — where Cdl. Pell was archbishop at the time. A man who testified against Pell in court claims he and one other boy were sneaking altar wine in the sacristy after Mass when Pell caught them in a room alone and forced them into sex acts. He also claims Cdl. Pell groped him about a month afterward (in January 1997).

The case against Pell met with a hung jury in September, as 10 of the 12 jurors thought he was innocent but could not reach a unanimous agreement. The judge ordered a retrial, and Cdl. Pell was found guilty by the court in December of five charges related to child sexual abuse.

For months, the judge had a media gag order in place so minimal information was available about the court proceedings. The gag order was finally lifted on Tuesday after prosecutors dropped a second allegation of sex abuse against the cardinal dating back to the 1970s.

The cardinal's sentencing is scheduled for March 13. Cardinal Pell maintains his innocence and is appealing the verdict.

Some Catholics suspect that Cdl. Pell might have been wrongly convicted on false accusations. An online petition was started by those who have doubts about the ruling. The petition states in part, "The undersigned simply wish to have their names recorded and their voices heard by the Victorian judicial system. We hope that George Cardinal Pell will be offered a proper and thorough appeal."

Australian law professor Jeremy Gans told The Guardian that Pell's defense attorneys have a good chance at winning the appeal if they appeal on the grounds of "unreasonableness" — meaning the jury reached its verdict without sufficient evidence.

Video of a detective interviewing Cdl. Pell was played in court during the trial and was recently released to the public. It shows Cdl. Pell angrily denying the allegations, calling the claims "absolute and disgraceful rubbish."

Some commentators are siding with Pell, arguing that the prosecution lacked evidence and that the victim's testimony was unreliable.

In the secular world, Australian conservative pundit Andrew Bolt says he suspects Pell might be the victim of a witch hunt. Bolt, an agnostic and a long-time defender of Cdl. Pell, said on his Sky News Australia show on Tuesday, "I have serious misgivings about this verdict. I just can't accept it, based on what I consider is the overwhelming evidence of this trial."

He added, "Pell, it seems to me, could well be an innocent man who is being made to pay for the sins of his Church — and made to pay after an astonishing campaign of media vilification."

Bolt proceeded to list 10 things about the allegation that he feels undermine the court's ruling. One of his points is that the anonymous man who testified against Cdl. Pell claims another boy was molested alongside him; but that other alleged victim — who is now deceased — once told his mother that he had never been molested.

Sky News removed advertising from Bolt's show Monday night for fear that Bolt's controversial comments might hurt advertisers' reputations and cause advertisers to be targeted by online activists.

Miranda Devine, Australian conservative and a Catholic, wrote in a column on Wednesday, "I don't believe that Pell, who I know slightly and admire greatly, could be guilty of sexually assaulting two choirboys in a busy cathedral after Sunday Mass when he was archbishop of Melbourne in 1996."

Catholic author George Weigel has written in defense of Cdl. Pell in both First Things and National Review. In both articles, Weigel discloses that he has been friends with Pell for years.

In the First Things piece, Weigel notes that Cdl. Pell freely chose to go back to Australia to fight the charges instead of hiding out in the Vatican. Weigel claims this shows how confident Pell is of his innocence.

With his National Review contribution, Weigel presented a series of problems with the testimony against Pell.

Both Weigel and Bolt noted that, at the end of Mass, Pell would typically process out and stay outside the cathedral to speak with Mass attendees. They also point out that the master of ceremonies for the liturgy was always by the archbishop's side before, during and after Mass.

Australian Jesuit priest Fr. Frank Brennan expressed shock at news of the conviction in a piece Tuesday. He noted that the alleged victim's testimony was unclear on how Cdl. Pell engaged in sex acts while wearing liturgical vestments. Father Brennan wrote, "Witnesses familiar with liturgical vestments had been called who gave compelling evidence that it was impossible to produce an erect penis through a seamless alb."

He also argued, "Anyone familiar with the conduct of a solemn Cathedral Mass with full choir would find it most unlikely that a bishop would, without grave reason, leave a recessional procession and retreat to the sacristy unaccompanied."

Pell was ordained a priest in the diocese of Ballarat in 1966. He became auxiliary bishop in the archdiocese of Melbourne in 1987 and was made archbishop there in 1996. He was appointed archbishop of Sydney in 2001. In 2014, he was appointed prefect of the Secretariat for the Economy — a position created by Pope Francis with the aim of overseeing the Vatican's financial activities.

Cardinal Pell's five-year term as prefect expired just days before the court lifted the media gag order on his conviction. The lifting of the suppression order also happened soon after the close of the Vatican summit on sex abuse. 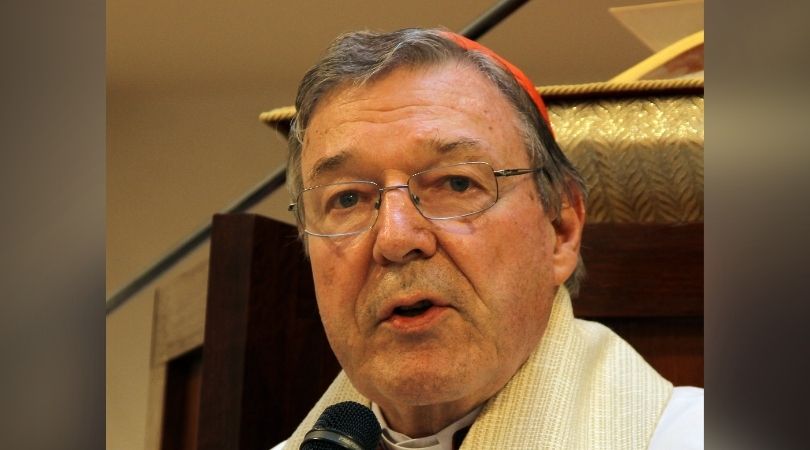