WASHINGTON, August 31, 2015 (Leah Jessen) - A recent "We the People" petition is pushing for the Obama administration to watch the Planned Parenthood videos released by the Center for Medical Progress. It still needs over 80,000 signatures for a response from the administration.

The online petition forum on the White House website, We the People, has 16,374 people as of Friday afternoon who have signed a petition for the administration to watch the videos that highlight the 30-month-long investigation into the nation’s largest abortion-providing organization.

On Aug. 6, after White House officials stated they had not watched the videos, the petition was formed.

The videos provide evidence that Planned Parenthood has violated federal law by (a) altering abortion procedures to facilitate procurement of organs requested by researchers; and (b) obtaining money above reimbursement for the procurement of those organs.

Thus far, the White House has stated its belief, based on statements from Planned Parenthood, that the videos are deceptive and illegally obtained, but it has admitted it has not watched the videos. It should.

The White House will not review the petition unless it reaches 100,000 signatures by Sept. 5 — within the set 30-day time frame for all We the People petitions. If the petition reaches the benchmark, an official response will be aimed to be released from the administration within 60 days.

"We created We the People because we want to hear from you," the administration writes on the introduction page for the platform. Since the start of the petition platform in 2011 as a way to ensure First Amendment rights, people can create a petition once they have a user account on WhiteHouse.gov.

After responding to a backlog of petitions at the end of July and revamping the petition platform to allow integration of petitions from other websites or blogs, White House Chief Digital Officer Jason Goldman blogged about the response to petitions.

The petition for the administration to watch the Center for Medical Progress videos was started by a person in New Jersey; people from around the country have added their names to the list in support. A similar petition that started in July received 4,232 supporters. 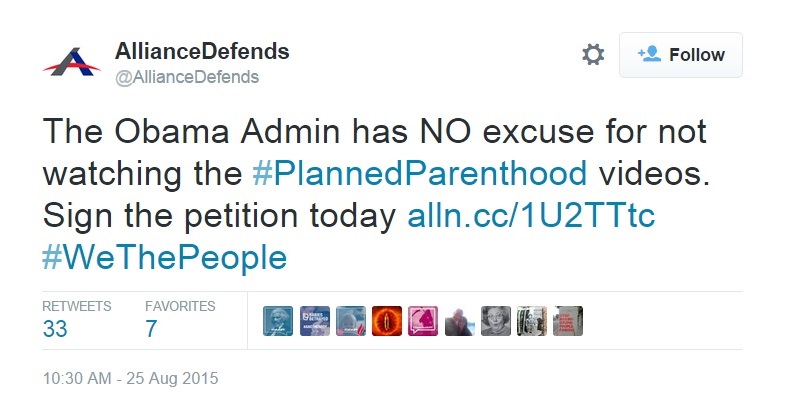 Alliance Defending Freedom shared a link to the petition with this message on Facebook:

The Obama administration has no excuse when it comes to not watching the recently released Planned Parenthood videos. Make your voice heard and sign the petition today to encourage the administration to watch the videos and see the graphic contents for themselves, rather than just accepting Planned Parenthood’s word that they are doing nothing wrong.