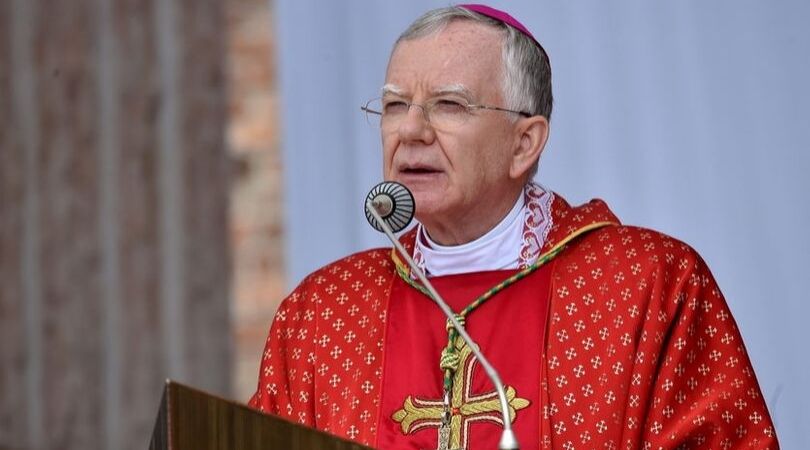 KRAKOW, Poland (ChurchMilitant.com) - Archbishop Marek Jędraszewski of Kraków issued a pastoral letter on Sept. 28 warning of major threats to Polish — and international — freedom emanating from the totalitarianism of the twentieth century.

The archbishop addressed his "Beloved Archdiocesans" in the letter entitled Totus Tuus ("Totally yours"), urging them to resist "the radical rejection of God" and LGBT propaganda.

He explained the "integrated approach" of totalitarianism; that when it rejects God, it makes a new vision of man, one that presents man as a caricature of himself and from the caricature grows LGBT ideology which blurs natural differences between men and women.

The archbishop described the propaganda of LGBT ideology as "aggressive" and "subverting," using concepts like "tolerance" and "progress" to justify its promotion.

He addressed his flock as "Brothers and Sisters" when he spoke of the danger of violating one's conscience in succumbing to the pressures of LGBT propaganda which represent a deviation from the principles of their Christian faith.

According to the Polish prelate, the recent pressure to cave to LGBT propaganda can be likened to the totalitarian times of the Polish People's Republic, when social advancements were guaranteed only to Communist Party members and believers were treated as second class citizens.

He also spoke of the great spiritual harm inflicted on children and teenagers as a result of sex education programs introduced by the World Health Organization (WHO) that teach LBGT ideology.

The archbishop said that approval of — or indifference to — these sex education programs represent a serious moral offense. Parents who do not resist LGBT ideology and WHO programs ensure "their own children will become victims of gender ideology."

Speaking also in first person about the need for rising to the occasion of history, the archbishop said:

We, each and every one of us, following the example of the Holy Father John Paul II, must pay back the debt we incurred towards our national heroes and the saint Patrons of our homeland. We also have a responsibility to defend those values ​​of which Poland was born more than 1050 years ago and whose deepest expression is the Christ Cross.

"This is not only a duty to the noble achievements of our ancestors, but also to future generations of Poles," he added.

The archbishop concluded by recommending a "prayer marathon" to include silent adoration of the Holy Sacrament for half an hour before evening Masses, ending with a decade of the Rosary and the litany to St. John Paul II, from Nov. 1 until the end of 2020 in all churches and chapels throughout the nation.

The archbishop has previously expressed concern that by '2050 the few [remaining] white people here in Europe will be...[living] on reservations like Indians in the United States' https://t.co/hUUYBQtfJQ

The last section of the litany to St. John Paul II reads:

O Lord, in your mercy and love,
you granted to the Church
a truly remarkable shepherd in Pope John Paul.
We now call him "Great" because of his true devotion to you
through the Blessed Virgin Mary.
May he be our leader on the march to your Eternal Kingdom
from his heavenly throne.

This is not Abp. Jędraszewski's first warning of the dangers of totalitarianism and communism.

In a Sept. 2 homily, marking the 75th anniversary of the Warsaw Uprising, the archbishop compared current LGBT activism to the Communist domination of Poland after World War II.

He declared that once afflicted with the "red plague" of Soviet communism, Poland is now afflicted by the "rainbow plague" of LGBT ideology, which denies human dignity and aims to control the souls, hearts and minds of the Polish people.

"Not Marxist, Bolshevik, but born of the same spirit, neo-Marxist," the archbishop explained. "Not red, but rainbow."

The Archbishop of Krakow, on the anniversary of the Warsaw uprising, has compared "LGBTI ideology" to fascism and Bolshevism, calling it a "rainbow disease." Such language, such incendiary comparisons, only promote hatred and violence against LGBTQ people.https://t.co/mouYLH5Qqw

The issuance of the letter coincides with the celebration of the 40th anniversary of Pope St. John Paul II's first pilgrimage to Poland in 1979 and the 99th anniversary of his birth in 1920.

The title of archbishop's letter echoes John Paul II's apostolic motto Totus Tuus, which expressed his devotion to Mary. The sainted pope explained the meaning further in his book Crossing the Threshold of Hope that expounds on the spiritual journey to Christ through Mary.

A Polish version of Abp. Jędraszewski's letter is available online.