Poland Under Mass Attack by ‘Rainbow Disease’ of LGBT Activism 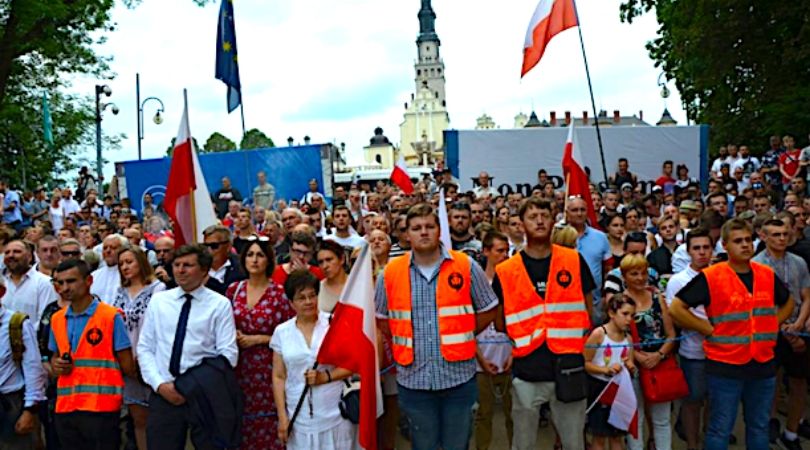 New siege: 'Not red, but rainbow'

Activists are coming from "every possible place on Earth," according to Justice4Poland. "They are extremely aggressive, violent and obscene!"

"Equality" marches have been organized every weekend, going from city to city and provoking Polish Christians. The marches appear well-organized — and paid for by George Soros.

The marches appear well-organized — and paid for by Soros.

Archbishop Marek Jędraszewski of Krakow, Poland, described the onslaught as "a siege from the 'rainbow disease' of LGBT activism."

In a homily marking the 75th anniversary of the Warsaw Uprising, the archbishop compared current LGBT activism to the communist domination of Poland after WWII.

He said once afflicted with the "red plague" of Soviet communism, Poland is now afflicted by the "rainbow" plague of LGBT ideology, which denies human dignity and aims to control the souls, hearts and minds of the Polish people.

"Not Marxist, Bolshevik, but born of the same spirit, neo-Marxist," the archbishop declared. "Not red, but rainbow."

Faithful Catholics formed a human wall to protect a children's Rosary procession in Częstochowa from a "mob" of homosexual activists.

According to Polonia Christiana, the 20th Pilgrimage of the Children's Backyard Rosary Circles to the Shrine of Jasna Góra took place without incident, thanks to police and hundreds of adults who separated the devotional event from the second LGBT "Pride March."

One Pole onsite in Poland told Church Militant that although the activists had been unsuccessful in breaching the walls of Częstochowa, "this year for the first time they went through Gniezno, the first historical capital of Poland associated with the baptism of Poland."

In Warsaw, members of Ordo Iuris are also weighing in on the "mass attack."

"We have the full right to say that homosexual activities are a sin," said Dr. Błażej Kmieciak, coordinator of the Bioethics Center of Poland's Ordo Iuris Institute of Legal Culture, pushing back on LGBT activists who claim the right to censor public opinion and silence Catholic voices.

Dr. Kmieciak told Radio Maria that Christian teaching shows from a moral perspective that man is the "highest good" ("najwyższym dobrem") and no genuine Catholic clergy would undermine the dignity of the human person.

He pointed to the words of Jesus Christ in the Gospel of John (8–11) when He turned to a sinner, saying: "No one has condemned you and I do not condemn you." But, Dr. Kmieciak pointed out, Jesus added: "Go and sin no more."

Just as betrayal of marriage is a sin, so believers have the right to say that homosexual activities are a sin, according to the bioethicist.

Homosexual activities are a part of the disorder of human nature (nieuporządkowania natury człowieka) and as such Catholics have the right to say they are a sin.

Dr. Kmieciak says that LGBT activists employ "a well-known salami technique." They represent an ideology that takes "more and more aggressive, more and more direct actions" — first, they shock, then they check and test to what extent that new phenomenon can be introduced to the public and then slowly introduce the actions.

This technique can be seen in the demand for adoption by same-sex couples and in attacks carried out on symbols important for Catholics.

For example, one of the most revered symbols for Catholic Poland, the Black Madonna of Częstochowa, has been misappropriated and blasphemed by LGBT protestors with over 30 town councils proclaiming themselves to be "free from LGBT ideology" as a result.

The bioethicist pointed out that "homosexuality" has already been removed from the International Classification of Mental Diseases and Disorders and that, in 2021, "transsexualism" will disappear from this classification.

The Ordo Iuris Institute team of lawyers believe "there is a pressing need for lawyers to become actively involved in the defense of the [Polish] Constitution. For this reason, we have been guided by the idea of the legal order — ordo iuris."

Justice4Poland says the "West is not aware" of the "mass attack" on Poland and that LGBT activists "are on the mission of destroying — as they say — The Last Bastion Of Christianity!!!"

"The Polish Government hands are tied as the LGBT+ is under the Special Protection from EU, UN, Civil Rights Watch, etc." explain the editors of the site.