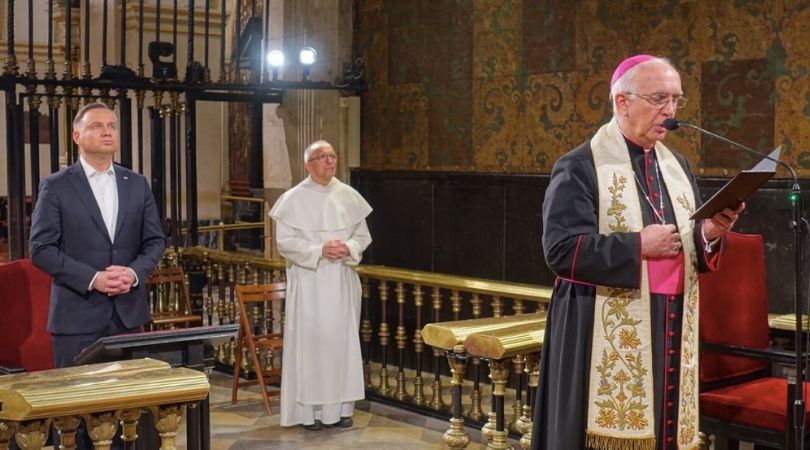 CZĘSTOCHOWA, Poland (ChurchMilitant.com) - The president of Poland prayed for an end to the pandemic in supplication before the famed icon of Our Lady of Częstochowa in southern Poland on Thursday evening.

President Andrzej Duda ended the day by making an appeal to Our Lady at Jasna Góra for his "homeland" and "countrymen scattered around the world" as the Wuhan virus continues to rage throughout Poland and the world.

In the chapel of Our Lady, President Duda prayed with Presidential Minister Adam Kwiatkowski among others. The small group distanced themselves according to state guidelines.

The Trisagion supplication, traditionally sung during Passion Week, was sung during the service. It begs God to show mercy on the penitent and implores Him to deliver the faithful from various afflictions, including "air, famine, fire and war."

At the end of the service, Duda handed a commemorative Rosary, with onyx beads and a Polish amber Cross, to the general of the Pauline Order, which he then placed on the altar. Afterward, the president prayed in silence for several minutes.

The 21-minute service was broadcast across Poland by TV-Trwam.

President Duda's visit comes as Poles are petitioning him to loosen government restrictions on churches, including the number of parishioners allowed in churches at any given time, something they see as discriminating against Catholics.

Petitioners have asked that half of the number of seats in churches be allowed to be filled during Holy Week services, the same proportion, they argue, the government stipulates for public transportation. They also note that even in spacious places of worship, they are forced to participate in the Holy Eucharist, the Way of the Cross, Gorzkie Żale (a service with hymns meditating on the Passion of Christ and the sorrows of His Blessed Mother) or Penance Rosary, with strictures that exceed those in crowded supermarkets.

It begs God to show mercy on the penitent and implores Him to deliver the faithful from various afflictions, including air, famine, fire and war.

Meanwhile, the Polish Ministry of Health reported on March 26 that the number of detected COVID-19 cases in Poland had increased to 1,221 after another 58 cases had been diagnosed. Two additional fatalities were also reported: a 78-year-old man and an 84-year-old woman in Warsaw, both of whom suffered with underlying conditions.

President Duda's appeal at Jasna Góra is significant, as the site is renowned for miraculous healings.

The centerpiece of Jasna Góra, the ancient icon of Our Lady of Częstochowa (also known as the Black Madonna) is especially revered in Poland. The face of Mary is blackened, having miraculously survived fires set by invading armies and from the perennial smoke of votive candles. The right side of her face bears slash marks believed to be inflicted by a Swedish Protestant soldier who recoiled when they reportedly started to bleed.

The painting has a long history. Legend says it was painted by St. Luke on a piece of a cedar tabletop built by St. Joseph while others believe it was painted on part of the table used at the Last Supper.

Saint Helen reportedly found the icon when she went to Jerusalem in search of the True Cross in 324 A.D. She gave the painting to her son, Constantine. When the city of Constantinople was invaded by the Saracens, the people prayed to Mary and the city was saved, thus beginning the great devotion to the Blessed Virgin Mary attached to this painting.

The painting eventually found its way to Poland in 1382, thanks to Prince Władysław, where it resides in the Częstochowa sanctuary of Jasna Góra and where Poles — and people from all over the world — come to pay homage to Mary as the Mother of God and the patron and protector of Poland.

President Duda's gesture of pleading to Our Lady for hope and healing this week is consistent with that of other Polish leaders throughout history. For example, Pope St. John Paul II appealed to Our Lady of Jasna Góra for protection during Poland's dark martial law days of the 1980s when the Polish people were fighting communists for their freedom.