More than 80 percent think bishops are part of the problem

DETROIT (ChurchMilitant.com) - Many Catholics don't believe that the U.S. bishops actually want to fix the problem of sex abuse within the ranks of the clergy.

In Church Militant's recent survey, nearly 84 percent of respondents claimed that America's prelates do not want to fix "the McCarrick problem" and that the bishops "are part of the problem and they can't be trusted to solve it."

Only about 16 percent of the nearly 6,000 respondents said they believe the U.S. bishops "genuinely want to address and fix the problems behind" the clerical sex abuse scandal.

This comes amidst ongoing disputes over how the U.S. Conference of Catholic Bishops (USCCB) should respond to the latest scandal. 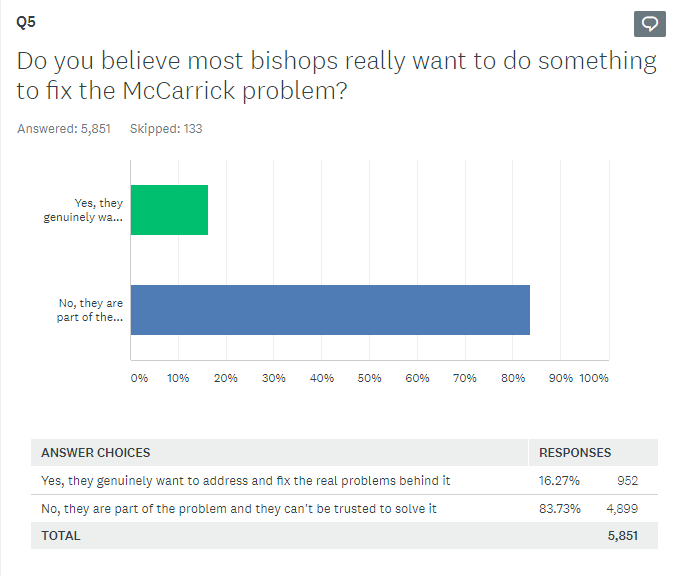 In the wake of numerous sex abuse allegations against former Cdl. Theodore McCarrick, there have been calls for the USCCB to initiate reform, policy changes and even mass resignations.

While some laity are advocating for an independent lay committee to investigate the bishops, only two U.S. bishops, according to The Catholic Herald, have joined the call for a laity-led outside investigation: Bp. Edward Scharfenberger of Albany and Bp. Timothy Doherty of Lafayette.

In contrast, Cdl. Donald Wuerl of Washington, D.C. has said that he thinks the U.S. bishops should establish their own committee and self-regulate — instead of being accountable to an external board beyond any bishop's control.