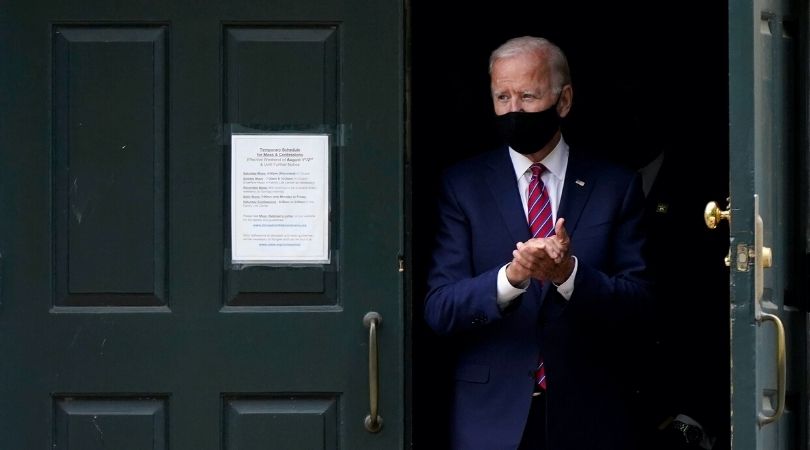 Devout Catholics swing the other way

WASHINGTON (ChurchMilitant.com) - A new research poll shows that self-identified Catholics on the whole favor Biden over Trump for president.

An EWTN News/RealClear Opinion Research Poll released on Monday finds that the priorities of Catholics, like the greater population, have been affected by the Wuhan virus pandemic and shutdowns. It also concludes a large disparity between cultural Catholics and faithful Catholics.

RealClearPolitics' Washington bureau chief Carl M. Cannon noted the trend that the more devout the Catholic is, the more he or she is likely to vote for President Trump.

"The most observant Roman Catholics still tend to support Donald Trump and the Republican Party, as do large majorities of white evangelical Protestants — and are among the most highly motivated voters," he said. "But the question for the GOP is whether there are enough of these voters to make up the difference."

Faithful Catholics are of the highest percentage of voters that are voting for the Trump-Pence ticket.

Cannon's question, on whether there are enough faithful Catholic voters to make up the difference in November, is an important one. Especially for the battleground states.

Cultural Catholics, those self-identified Catholics who do not practice their religion in any consistent way, were far more likely to vote Democrat than non-Catholics. Faithful Catholics are of the highest percentage of voters that are voting for the Trump-Pence ticket.

The article explaining the poll, published by the National Catholic Register, noted something that has been gradually manifesting itself for the past 50 years:

"[W]hen it comes to foundational Church teaching, the active or devout Catholics are increasingly at odds with their fellow Catholics, to the point that there are virtually two Catholic communities in the country. This is obvious in the 2020 presidential election."

Unity on Some Issues

The issues for which all Catholics displayed concern have been the ones affecting Catholics of all levels of faith.

An overwhelming majority of respondents said the vandalizing of Churches and statues was a real concern, as was the burning of Bibles.

Anti-Catholic violence is something on which almost all Catholics expressed a deep concern. An overwhelming majority of respondents said the vandalizing of Churches and statues was a real concern, as was the burning of Bibles and threats to destroy all white European-looking statues of Jesus.

With regard to what the U.S. bishops perennially call the pre-eminent moral issue of our time — abortion — Catholics are all over the spectrum, according to priority of their faith practice.

Less than a third of all self-identified Catholics surveyed said they were less likely to support a pro-abortion candidate. Close to a quarter — 22% — said they were more likely to do so. A third said it made no difference to them.

Other issues that concerned over 50% of all Catholics were Supreme Court nominees (68%) and religious liberty (60%).

Even after America has killed 62 million preborn children surgically and around 12 times that amount chemically since Roe v. Wade, 59% of self-proclaimed Catholics who say abortion concerns them place it only 12th on their list of priorities.

Although the Church teaches that abortion is "intrinsically evil" and cannot be supported, many Catholics have been trained by Marxist clergy and bishops espousing "seamless garment" theory to think that social justice issues are equally important, swaying votes toward pro-death Democrats — a phenomenon explained in Church Militant's episode of Mic'd Up — A Catholic Vote for Trump.

The survey confirmed the growing population of Latino-American Catholics and the wide spectrum that exists in belief and practice among Catholics. Over half (52%) of those surveyed were women, and 48% were under the age of 45. Hispanics made up 41% of the respondents. With regard to practice, only 35% of all Catholics were found to attend Mass at least once a week. Among more devout Catholics, 77% say they regularly set time aside to pray, and 62% say they pray the Rosary once a week or more.