DETROIT (ChurchMilitant.com) - According to a self-proclaimed, non-partisan research company, the majority of Americans who identify as religious believe in allowing gays and lesbians to have so-called same-sex marriages.

The report, released on February 3 — more than 60-percent of U.S. Catholics surveyed say they are in favor of gay marriage and another 60 percent of Catholics say there should not be religious exemptions for small business owners who are asked to provide services for same-sex occasions. 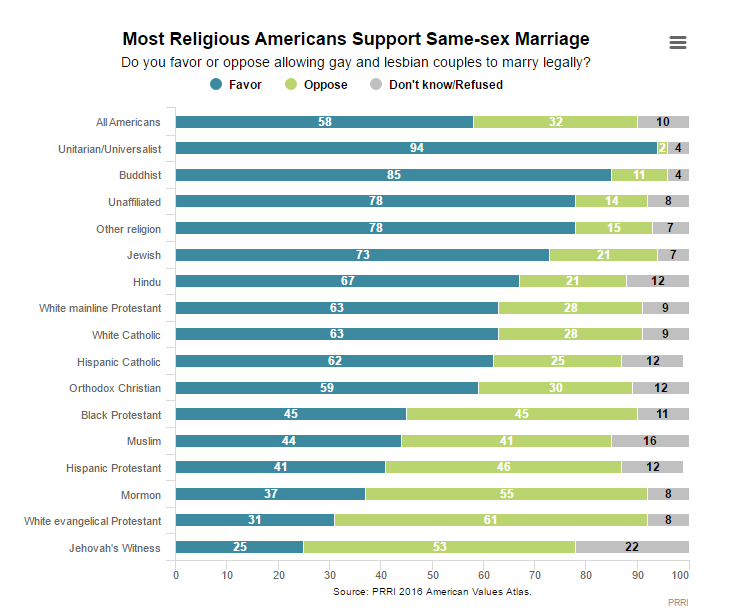 The poll surveyed more than 40,000 Americans in 2016 across all religious backgrounds. The report alleges there are only three groups that have a majority that oppose same-sex marriage — Jehovah's Witnesses, white evangelical Protestants and Mormons.

The Public Religious Research Institute (PRRI) conducted the poll and their findings are typically favored by liberal media news outlets.

At the Al Smith dinner, Donald Trump joked about the news outlets that cover PRRI's finding, saying "I know Hillary met my campaign manager, and I got the chance to meet the people who are working so hard to get her elected. There they are — the heads of NBC, CNN, CBS, ABC — there's the New York Times, right over there and the Washington Post."

In a research report published in 2015 titled The Pope Francis Effect?, PRRI alleges, "Although Pope Francis has not changed the Catholic Church's official position opposing same-sex marriage, nearly four in 10 (38 percent) of Catholics believe that the pope supports allowing gay and lesbian couples to marry legally."

The poll is released at a time when LGBT and religious conscience protection are at the forefront in politics. The Associated Press recently ran a story titled, Trump Leaves LGBT Groups, Religious Conservatives Wary. President Trump reportedly scrapped an executive order that would have allowed religious exemptions for adding LGBT non-discrimination policies.