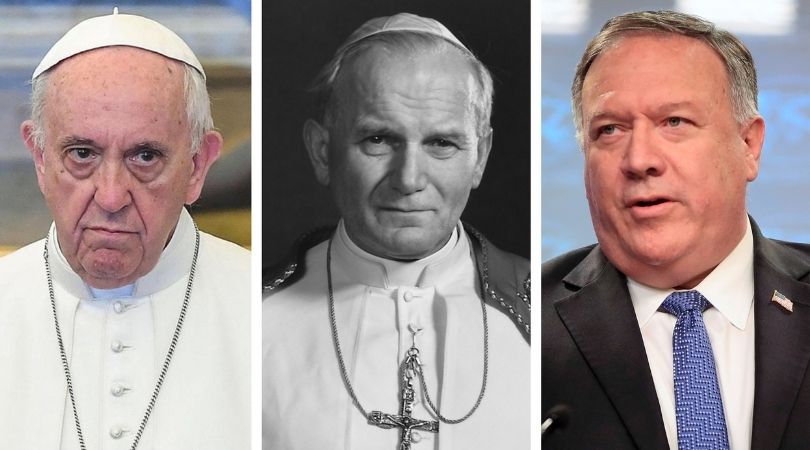 "Every serious scholar of the Cold War now acknowledges that Pope John Paul II played a pivotal role in igniting the revolution that brought down the Iron Curtain," Pompeo declared, addressing the symposium on Advancing and Defending International Religious Freedom Through Diplomacy Wednesday morning in Rome.

"Pope John Paul II bore witness to his flock suffering. He challenged tyranny by doing so. He demonstrated how the Holy See can move our world in a more humane direction like almost no other institution," the secretary of state noted, describing how the Polish pope had canonized 87 Chinese believers and 33 European missionaries killed in China before the current communist regime took power.

"Nowhere is religious freedom under assault more than it is in China today," Pompeo emphasized, where "Catholic churches and shrines have been desecrated and destroyed."

"Catholic bishops like Augustine Cui Tai have been imprisoned and Catholic lay leaders in the human rights movement, not least in Hong Kong have been arrested," while "authorities have ordered churches to replace images of Jesus with Chairman Mao and General Secretary Xi Jinping," he lamented.

Even liberal Catholics who love Francis are disappointed by his accommodation of the communist Chinese.

"It's quite memorable, arguably even historic. What Pompeo said here will be remembered by historians. He unerringly invokes John Paul II. Every word here is accurate," Kengor, papal biographer and author of A Pope and a President: John Paul II, Ronald Reagan, and the Extraordinary Untold Story of the 20th Century.

"And yet, while Pompeo's statement rings with truth it also rings with sadness. The sadness is that he's begging Pope Francis and the Vatican to speak out against China's human rights abuses and restrictions on religious freedom," Kengor said.

"He's kindly and diplomatically pleading with Pope Francis to speak up. He's complimenting Francis, praising Francis, stroking Francis, doing everything he can in this speech to try to get this pope to say just one critical thing about the world's largest abuser of religious freedom — that is, China," Kengor added.

"Pope Francis has exhorted the church to be permanently in a state of mission. It is a hope that resonates with this evangelical Protestant who believes as the Holy Father does that those of us who have been given the gift of Christian faith have an obligation to do our best to bless others," Pompeo said.

Kengor lamented the fact that the speech would have little impact on the Vatican's desire to renew its controversial deal with China.

"It's really quite sad. And yes, Pope John Paul II would be sad. In fact, just about everyone (outside perhaps this Vatican) is sad about this very embarrassing situation. Even liberal Catholics who love Francis are disappointed by his accommodation of the communist Chinese," Kengor commented.

Pompeo took a subtle dig at the Vatican's secret concordat with China while extolling the "incredible moral witness" of Catholic priest Fr. Bernhard Lichtenberg who boldly "resisted the Nazi regime" and in the wake of Kristallnacht "began to speak up more loudly on behalf of the Jews."

"Father Lichtenberg didn't stop with words but prayed each day publicly for the Jews," Pompeo narrated. "The Nazis arrested him in 1941 and made him a deal. He could go free in exchange for stopping his subversive preaching. Instead, he asked to accompany Jews and Christians deported to Poland so he could minister to them."

When the Nazis gave him given a two-year prison sentence, he replied: "I submit that no harm results to the state from citizens who pray for the Jews," Pompeo added, calling "all faith leaders to exhibit a similar bold moral witness for the sake of religious freedom."

Pope Francis has exhorted the church to be permanently in a state of mission. It is a hope that resonates with this evangelical Protestant.

"For all the U.S. can do, we are constrained by the demands of world politics. The Church is in a different position," Pompeo pointed out.

"Earthly considerations shouldn't discourage principled stances based on eternal truths. And as history shows, Catholics have often deployed their principles in glorious service of human dignity," he punched away.

Vatican Secretary for Relations with States Abp. Paul Gallagher, who spoke at the symposium organized by the U.S. Embassy to the Holy See, lambasted "political correctness," "inflexible ideologies" and "ideological colonization" as responsible for the persecution of Christians.

Gallagher's silence on China was noticed by reporters who asked him about it. But Gallagher said that "not naming names and blame is one of the principles of Vatican diplomacy."

Observers also noted that the speakers did not specifically name radical Islam as responsible for much of the current persecution of Christians.

Pompeo and Parolin are due to hold talks on Thursday. 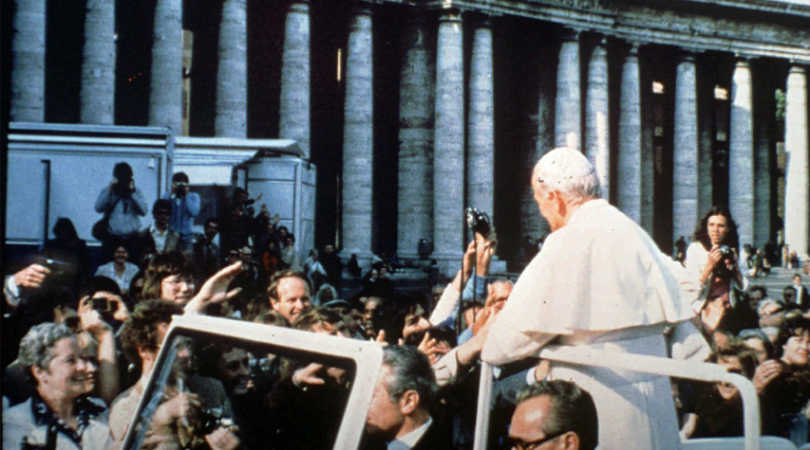