ROME (ChurchMilitant.com) - Pontifical universities are coercing students and staff to take the abortion-tainted jab or pay for expensive COVID-19 testing every 48 hours if they wish to teach or attend lectures or use the library or refectory.

The distinguished universities are adopting Italy's Green Pass in violation of the Nuremberg Code, Italian Constitution, Council of Europe resolution, and in the wake of thousands of conscientious objectors who protested across 120 Italian towns and cities on Saturday.

"The certification will be appropriately checked at the entrance to the university by the staff who will check its validity in the manner provided for by current legislation," the Lateran University's website announced.

The Salesianum's website noted that the restrictions were being enforced according to the rules laid down by the Congregation for Catholic Education, and the Green Pass would also be required for students sitting admission exams.

"All students who intend to take the exams are therefore invited to check the procedure indicated and to comply with the provisions set out," the Lateran statement noted.

My grandfather fought in World War II to free Europe from Nazi tyranny. I'm trying to keep Italy free from modern tyrants who want to take away our rights.

On Monday, the Jesuit-run Pontifical Gregorian University sent an email to all staff and students enforcing the Green Pass. While located on Italian soil, the Gregorian enjoys certain extraterritorial privileges and exemptions granted to it by articles 15 and 16 of the Lateran Treaty.

Rector Fr. Nuno da Silva Gonçalves stated that the Gregorian would be complying with the provisions of the Italian government and exemptions would be granted only to persons possessing "the relative exemption certificate on the basis of the criteria defined by the Italian Ministry of Health."

The Angelicum said it would consider medical exemptions in accordance with government legislation, but the Lateran insisted that unvaxxed staff and students would have to take a COVID-19 test to obtain the Green Pass. The Italian government does not permit religious or conscience exemptions.

While the Lateran, Augustinianum and Pontifical North American College enjoy extraterritorial status as part of the Vatican City State, the Angelicum and Regina Apostolorum are on Italian soil and are required to follow Green Pass regulations.

The Pontifical University of the Holy Cross, also located on Vatican territory, announced it is "studying the matter with our consultants" and will take a decision "in the coming days."

Two university staff speaking to Edward Pentin, author of The Next Pope, expressed concern about these restrictions as they refuse to be vaccinated on ethical and safety grounds.

Each test costs around 20 euros and staff and students will need to be tested two or three times a week. The high cost of the test will ultimately compel unvaccinated students from poorer countries to get vaccinated if they wish to continue to attend lectures in person.

"Students without a Green Pass may be forced into isolation and will have to follow lectures online in their rooms," a university source told Church Militant. "International students are asking why they need to even return since they can stay at home and attend classes."

I would have nothing more to teach you if I became co-responsible, even passive, for an instrument of discrimination such as the Green Pass.

Church Militant has also learned that superiors of religious orders in Rome, including Jesuits, Dominicans, Salesians and Franciscans are coercing members to get vaccinated on pain of their vow of obedience. Several nuns, especially from Third World countries, are also being compelled to take the jab against their will.

Religious who refused to take the shot are being told their unvaccinated presence is making others in the community nervous because they could infect the majority who are vaccinated.

"A religious cannot be forced to violate his conscience in order to fulfill the vow of obedience," a priest from a religious order told Church Militant. However, sources also added that some Jesuit superiors were respecting the right of conscientious objectors not to go against their conscience.

"The Society of Jesus is not asking their men to make any decision against their conscience," a Jesuit professor told Church Militant.

The Congregation for the Doctrine of the Faith (CDF) has ruled "vaccination is not, as a rule, a moral obligation and that, therefore, it must be voluntary."

None of the universities are currently offering exemptions on grounds of conscience for staff or students refusing to take the abortion-tainted vaccines.

Reports have surfaced, however, that the vaccinated are carrying a viral load more than 250 times greater than that of the unvaccinated and that they are actually the superspreaders generating additional forms of viral illness, rendering a vaccination pass useless.

Studies from the United Kingdom and Israel are demonstrating natural immunity is a far superior protectant against reinfection by the Delta variant, whose mutation has rendered current vaccines obsolete. Doctors have emphasized the COVID-recovered who get the jab are at greater risk of adverse outcomes.

"There's been a lot of pressure to get everyone vaccinated," a Vatican official said on condition of anonymity. "Almost all Italian employees in the Vatican have now been vaccinated."

The source added that a small group of Swiss Guards resisted receiving the vaccine, but they were "almost all 'forced' into getting it, to the extent that a doctor from the [Vatican] health directorate held special seminars to try to convince the skeptics."

"My grandfather fought in World War II to free Europe from the tyranny of the Nazis. I'm following in his footsteps trying to keep Italy free from these modern tyrants who want to take away our rights," Rose, a committed Christian, stressed.

The exclusion of school professionals who do not have the Green Pass is  'unacceptable political blackmail.'

Several Catholic teachers in secular institutions told Church Militant they were prepared to face suspension or dismissal rather than take the jab. The teachers are being defended by Catholic lawyers from the charity Iustitia in Veritate (Justice in Truth).

The legal charity excoriated the transformation of schools and universities into "laboratories for vaccination and psychological experiments" that are turning students into "guinea pigs for pharmaceutical companies" or into "targets of hatred."

Iustitia in Veritate noted that the "alternatives" to vaccination, including testing every 48 hours or the certificate of being cured of COVID, (which lasts only six months) "are in fact blackmailing tools for forcing people to get vaccinated."

The lawyers are urging teachers and students to engage in resistance through civil disobedience while they challenge the decree's unconstitutionality in Italy's courts.

Iustitia in Veritate is also citing Council of Europe resolution 2361 (2021) calling upon governments to ensure "that citizens are informed that the vaccination is NOT mandatory and that no one is politically, socially or otherwise pressured to get themselves vaccinated if they do not wish to do so themselves."

In a press statement, SCA said it "considers the Green Pass an instrument of social control and curbing democratic rights and judges the exclusion of school professionals who do not have it as unacceptable political blackmail."

The Catholic hierarchy, who are zealously enforcing state restrictions, are supporting neither Justice in Truth nor the SCA.

Meanwhile, Dr. Andrea Camperio Ciani, professor of evolutionary psychology at the University of Padua, has written to the rector stating that he is prepared to be suspended with full loss of salary.

"I emphasize that in a free university, which I believed it was, any party cards (be they fascist cards or the Green Pass) could not have any force, given the libertarian, democratic spirit which I believed belonged to us," Ciani writes.

Living Not by 'Bread Alone'

A touching letter written by conscientious objector and professor of history and Italian Alessandro La Fortezza to his students has gone viral on Italian social media.

"I would have nothing more to teach you if I became co-responsible, even passive, for an instrument of discrimination such as the Green Pass — discrimination based not on religion, ethnicity, skin color or sexual orientation, but on individual choices and beliefs," Fortezza writes.

The faithful Catholic insists he will not get the vaccine to keep his job, since "man does not live by bread alone" (Matthew 4:4). Fortezza also reminds his students of Jesus' care for the lilies of the field (Matthew 6:28).

The professor says he will not download the Green Pass even if he decides to get vaccinated or take a COVID test "so that my individual choices, whatever they are, do not become grounds for discrimination for those who have made different choices." 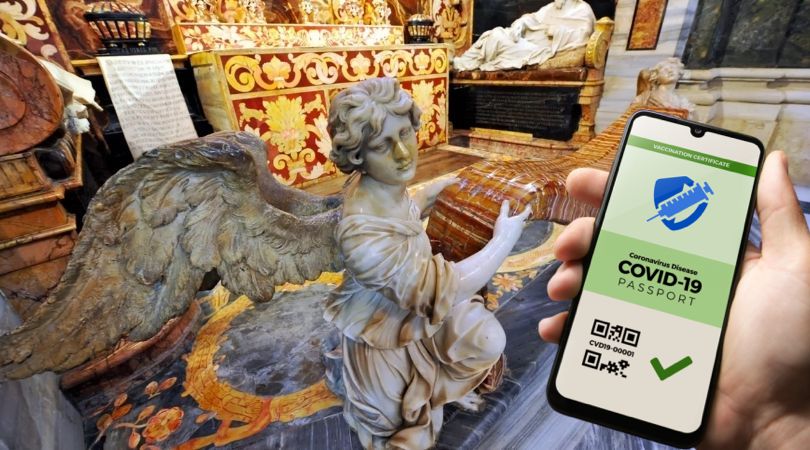