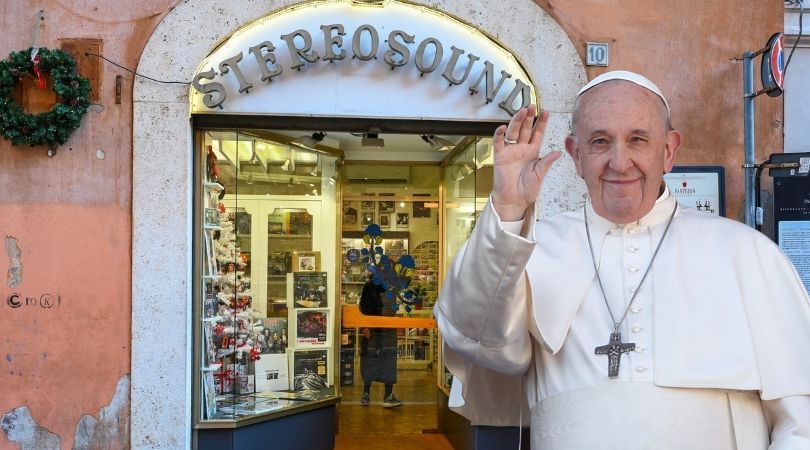 Statistical analysis demonstrates near impossibility of a happy accident

ROME (ChurchMilitant.com) - A popular Italian journalist and art critic has accused Pope Francis of lying over a photograph of the pontiff emerging from a record store in Rome last Tuesday.

Writing for Milan-based Libero Quotidiano, Andrea Cionci used statistical analysis to debunk what he calls the "fake propaganda" on the Holy Father's unofficial visit to Stereosound, a music shop in Via della Minerva (near the world-famous Pantheon).

According to Vatican News, Francis made a "surprise visit" to Stereosound at around 7 p.m. in a white Fiat 500L "to bless the recently renovated premises." The pontiff spent around 10 minutes looking around the shop.

Francis did not make any purchases but was seen leaving the shop with a gift wrapped in blue paper — a 33-rpm record of classical music.

As Francis left the premises, a small crowd with smartphones filmed his exit. Youngsters peering through the shop's windows were "joking about what kind of music the pope might be interested in," the Holy See media reported.

Francis knows the owners of the shop from his time as archbishop of Buenos Aires (when he stayed in the Casa del Clero in the nearby Via della Scrofa when visiting Rome), Vatican News added, noting that the pope blessed the owner Letizia, her daughter and her son-in-law.

"But, by a sheer twist of fate, a reporter who happens to be the pope's Spanish hagiographer and is one of Francis' blue-eyed media boys happened to be waiting for a taxi and snapped the pontiff exiting the store," Cionci remarked sardonically.

Cionci asked a mathematician to do a statistical analysis of the possibility of such a meeting occurring without being staged.

Below is a synopsis of the mathematician's analysis:

Rome has a population of approximately 3 million residents and tourists. The probability of an ordinary resident snapping the picture is 0.0009%.

There are around 200 journalists accredited to the Holy See. The probability of one of these Vatican journalists accidentally bumping into the pope while he is on an undisclosed shopping trip is 0.000012%.

The area around Francis from where the photo may have been taken is defined as a 10-meter radius semicircle (centered on the exit from the shop). Its surface is 157 square meters. The surface of the municipality of Rome is 1,285 square kilometers (1,285,000,000 square meters).

The maximum wait (in most cases) for a cab at a Roman taxi stand is half an hour. Given that the shop is open eight hours a day and 300 days a year, this means that over the eight-year period of the Francis pontificate, the shop was open 38,400 half-hour periods in total.

The possibility that one of the 200 Vatican correspondents might intercept the pope while the pope is visiting a store during its business hours — and that he might be within a radius of a few meters to capture an image of the pontiff — lower the chances of a chance encounter to 0.000000062%.

But Martínez-Brocal is no ordinary Vatican reporter, notes Cionci. According to his Twitter bio, he is director of the Rome Reports media. More importantly, he is author of El Papa de la Misericordia (The Pope of Mercy) — a hagiography justifying Francis' heterodoxy as pastoral accompaniment.

Martínez-Brocal, who also wrote the documentary Francis: The People's Pope, is director of the weekly program "The World Seen from the Vatican" and penned the book El Vaticano como nunca te lo habían contado (The Vatican as You've Never Heard it Recounted Before).

The Vaticanist frequently flies with the pope on the pope's trips and has had the honor of being chosen to ask him questions.

"The mathematics is clear. We can state, without fear of being proven wrong, that Bergoglio is 99.999999938% lying, and the photo op has been staged by common agreement with his Vaticanist-photographer-reporter Javier Martínez-Brocal," Cionci concludes.

But it doesn't stop there. Not only is the photo op staged, but the Vatican insulted the intelligence of the public even further by stage-managing the pope's response and sending a "noble and beautiful letter," handwritten by Francis, to Martínez-Brocal, Cionci pointed out.

Thanks for doing your job — even if it did put the pope in difficulty.

In a letter sent to the Rome Reports director on Thursday, Francis complimented Martínez-Brocal on his journalism.

"I won't deny that it was a case of bad luck that, after taking all the precautions, there was a journalist waiting for someone on the taxi line," Francis wrote. "You can't lose your sense of humor."

"Thanks for doing your job — even if it did put the pope in difficulty," the pontiff added.

Martínez-Brocal shared the letter with colleagues on Friday, creating a global-media sensation as his picture went viral.

While mainstream media claim the pope enjoys Beethoven, Mozart and Bach, Francis almost never makes references in his talks to classical music or the great artifacts of Western culture.

In an essay reeking with contempt for Francis, Michel Onfray, public intellectual and the author of over 60 books, compared what he considers the refined and finely honed cultural and theological sensibilities of Benedict XVI with Francis' unsophisticated and boorish lack of artistic finesse — compensated for only by his Machiavellian-Jesuit cunning.

Communications scholars have written extensively on Francis' media management, showing how the pontiff uses strategies to position himself on the pinnacle of hierarchical absolutism — as one who is distant, remote, supreme and authoritative while, at the same time, portraying himself as a self-effacing man of humility who is simple and close to the people.

The media frenzy over Francis' humility and authenticity was met with skepticism by media scholars.

In their article, "The Making of Contemporary Papacy: Manufactured Charisma and Instagram," Oren Golan and Michele Martini from the University of Haifa note that Francis manages media "by means of a strategic management of leader distance, hierarchical positioning, geographical locales, haptic engagement [any form of interaction involving touch] and leader's visual focus."

Professor Christopher J. Oldenburg, in his academic book Critical Mercy and Conversion for the Twenty-First Century, notes that a prevailing image of the pope's humility was Francis returning personally to his hotel to pay his bill.

"Following this narrative, a multitude of other instances of Francis violating papal protocols and self-deprecating, divesting of prototypical luxuries, abounded," Oldenburg writes. "However, the media frenzy over Francis' humility and authenticity was met with skepticism by media scholars."

Church Militant received no response to our questions to the Holy See Press Office and Martínez-Brocal asking if they would refute Cionci's claims of the entire event being rigged. 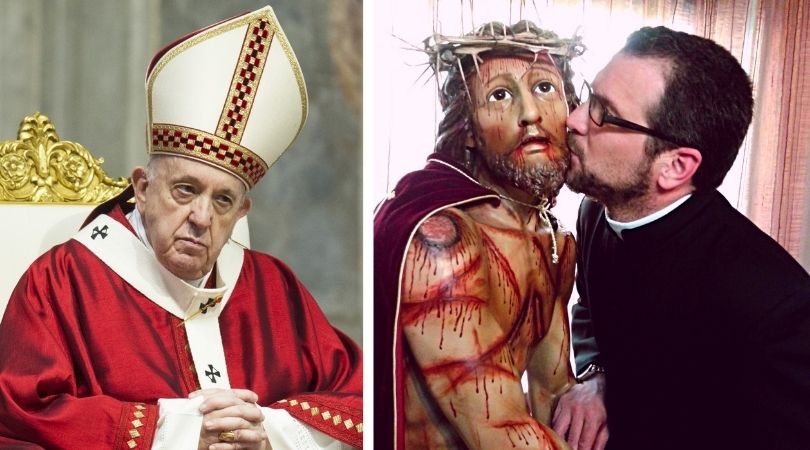 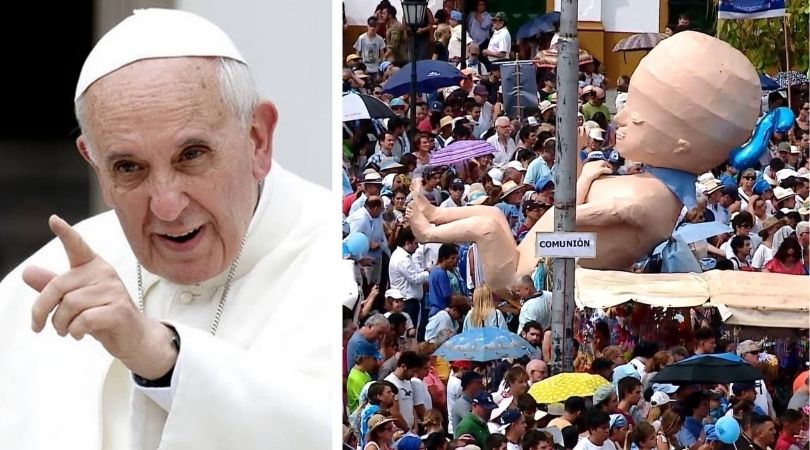