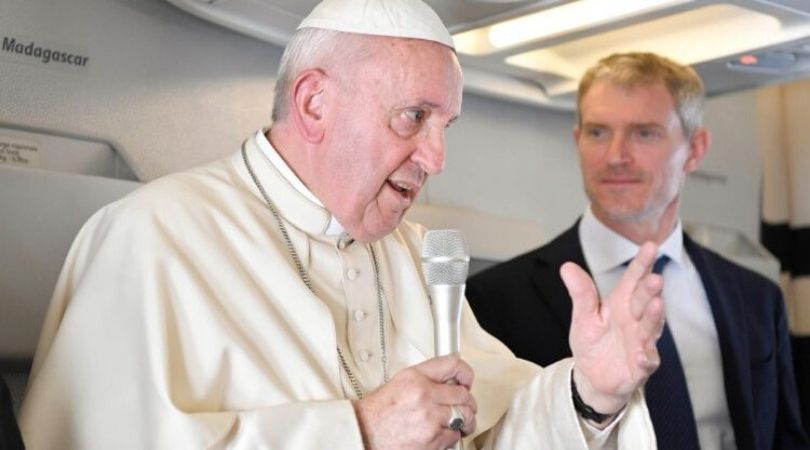 VATICAN CITY (ChurchMilitant.com) - Pope Francis has recently decried corruption as undermining the dignity of the person, while he is overseeing a Vatican financial scandal unlike any other.

On his return flight from Japan on Nov. 26, the pope discussed the scandal embroiling the Vatican, claiming that the "internal mechanisms are beginning to work," while also acknowledging "there is corruption."

"It's a bad thing, it's not good what is happening in the Vatican. But it was clear that the internal mechanisms are beginning to work, those which Benedict XVI had already begun to make," he said.

In a tweet on Monday, Pope Francis said: "Corruption undermines the dignity of the person and shatters all good and beautiful ideals. All of society is called upon to make a concrete commitment to combat the cancer of corruption which, with the illusion of quick and easy profits, in reality impoverishes everyone."

Corruption undermines the dignity of the person and shatters all good and beautiful ideals. All of society is called upon to make a concrete commitment to combat the cancer of corruption which, with the illusion of quick and easy profits, in reality impoverishes everyone. #IACD2019

On Sunday, Corriere della Sera provided some details of the recently exposed Vatican financial scandal involving the Secretariat of State and Peter's Pence, the Vatican's charity, whose money is ostensibly devoted to the poor around the world.

The Secretariat of State handles an estimated €700 million.

I do not thank God there is corruption, but I thank God that the Vatican monitoring system is working well.

Money from the Secretariat of State comprises a significant portion of the Holy See's assets, which are estimated to be roughly €11 billion, with about €6 billion in real estate and €5 billion in securities.

The Secretariat is divided into three sections ― General Affairs, Relations with States and the Diplomatic Staff ― of which General Affairs manages Peter's Pence and cash.

The current financial scandal began in 2012, when Cdl. Giovanni Angelo Becciu was apostolic nuncio in Angola, Africa, where his friend, Antonio Mosquito, invited him to invest $200 million in his oil company, Falcon Oil, for a 5% share.

In October 2018, Abp. Edgar Peña Parra became the head of General Affairs, replacing Becciu, who had held that position since 2011.

Concerns about the volatility of the investment led Parra as well as the Secretariat of State, headed by Cdl. Pietro Parolin, to sell the shares and reinvest the money.

The primary element of this financial scandal centers on $200 million from Peter's Pence being spent on a property turned into luxury apartments on Sloane Avenue in Chelsea, London.

Corriere della Sera spotlighted that the $200 million was technically a Swiss loan used as a guarantee of Secretariat assets.

When asked about investment of Peter's Pence funds in the London property, Pope Francis defended it as 'good administration.'

Enrico Crasso, who handled the Swiss loan, left the Swiss bank in 2014 and began his own business, Sogenel Holding of Lugano, which handled investing $500 million from the Secretariat.

In an unprecedented move, Crasso sold the Vatican "client" in 2016 to Az Swiss of the Azimut Group and became the contextual manager of Az Swiss, joining the board of directors and continuing to manage half a billion Vatican dollars under the umbrella of Azimut.

In 2016, Crasso established his own fund, the Centurion fund, in Malta to manage $50 million from the Secretariat.

The Centurion fund has invested that money in multiple places, including $4.3 million in bonds to finance the films Rocketman and Men in Black.

When asked directly about investment of Peter's Pence funds used to invest in the London property, Pope Francis defended the transaction, claiming it was "good administration."

Church Militant spoke with a priest and former seminarian professor (who wishes to remain anonymous) about this financial scandal and the pope's handling of the situation.

"Just last October, during the course of the Amazon Synod, the Vatican was exposed for making enormous acquisitions in real estate with funds from Peter's Pence ... in London of all places," he continued. "And then again, just last week, new revelations came out that Francis' papacy also invests in movie productions."

"If you can stomach it, Francis' papacy funded the production of Rocketman, a movie about the gay Elton John," he added.

Tragically, the one man who seemed to be taking the Vatican Bank and papal finances in a positive direction, Cdl. Pell, sits alone in an Australian prison serving time for a single dubious charge of sexual abuse.

"Francis is far, far from making the Vatican Bank more functional and transparent as promised for the needs of the Roman Catholic Church. If anything, the Vatican Bank and papal finances continue to devolve under his leadership and oversight, or rather, lack of oversight," he noted.

"Tragically, the one man who seemed to be taking the Vatican Bank and papal finances in a positive direction, Cdl. Pell, sits alone in an Australian prison serving time for a single dubious charge of sexual abuse," the priest said.

"Messed up does not cover it, nor does Pope Francis seem to care," he added.