‘Pachamama’ Figures Found, May Be On Display Sunday in St. Peter’s Basilica 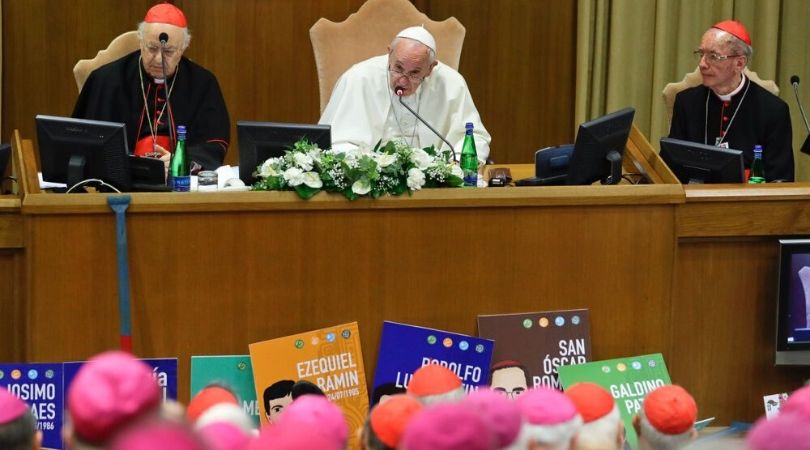 Pope asks 'pardon' from those offended by 'theft'

VATICAN (ChurchMilitant.com) - Pope Francis is apologizing for the furtive removal of the carved fertility figures from a Rome church, and has announced they've been found and might be displayed in St. Peter's Basilica for the Amazon Synod's closing Mass.

"As bishop of this diocese, I apologize to those who have been offended by this act," said Pope Francis in the opening remarks for Friday's afternoon general congregation, first reported by French media outlet i.media, present in the aula.

The pontiff referred to the statuettes as "Pachamama" — up till now a pejorative used by by critics who claim she represents the pagan Mother Earth goddess — and announced that Italian police had found them and currently have them in safekeeping.

Pope Francis said the Commander of the Caribinieri expressed his wishes to follow the synod fathers' directions with regard to other "initiatives" they had in mind, including "the display of the statues at the closing Mass of the Synod."

I apologize to those who have been offended by this act.

The Carabinieri have since issued a statement explaining the find, saying "they recovered three of the artifacts removed depicting a pregnant woman."

The statement goes on to say that the Pachamama figures had been "stolen from a side altar ... where they were used for prayer by the 'Itinerant Team' — a Catholic group with headquarters in South America that is taking part in the Amazon Synod ... ."

In this afternoon's remarks, the pope insisted that the figures had been displayed "without any intention of idolatry" in Santa Maria del Traspontina, lamenting that their "theft" had caused a "media uproar."

But Amazonian Bp. José Luis Azcona of Marajó in the Amazon region disagrees, confirming that "Pachamama" is a pagan goddess and denouncing the rituals in the Vatican.

"In those rituals there is the devil, there is magic," he said in a sermon given Oct. 16 in Brazil.

"The invocation of the statuettes in front of which even some religious have bowed in the Vatican (and I will not mention the religious order to which they belong) is the invocation of the mythical power of Mother Earth, to which they are asking blessings upon humanity or offering gestures of gratitude," he said. "These are scandalous demonic sacrileges, especially for the little ones who can't discern."

Former Vatican doctrine chief Cdl. Gerhard Müller also appeared to praise the removal of the carved figures, saying on EWTN Thursday, "The great mistake was to bring the idols into the church, not to put them out."

"To throw it out can be against human law, but to bring the idols into the church was a grave sin, a crime against divine law," he added.

WORLD OVER HOT TAKE: Cardinal Gerhard Mueller on the men in Rome who threw the indigenous "Mother Earth" statues in the Tiber river. See the full interview tonight at 8PM E @EWTN pic.twitter.com/wlTSisYkD9

In the early morning hours of Oct. 21, two unnamed individuals took the wooden figures from Santa Maria del Traspontina, only steps from St. Peter's Basilica, walked to Ponte Sant'Angelo directly in front of Castel Sant'Angelo, and pitched them over the bridge into the Tiber River, where they floated away.

According to this latest news, the figures did not sink to the bottom of the Tiber, and were able to be recovered by police. Church Militant reported that the Vatican is considering pressing charges against the men, whose identities and whereabouts remain unknown.

The video showing their removal has since gone viral, shared thousands of times on social media, resulting in a polarized reaction from Catholics, with orthodox priests and laity exultant that what they deemed pagan idols were no longer desecrating the house of God, while liberal-leaning Catholics slammed the act as evidence of "racism," "hatred" and "bigotry."

The hatred unleashed by the Synod, which led to breaking into a church, is hatred of the "foreigner," hatred of a Christianity that seems different from your own, when in fact Christianity has always inculturated itself. The "Roman Church," after all, began in the Middle East. pic.twitter.com/g7IaJjALrz

REPAM, a Catholic network that advocates on behalf of the Amazonian indigenous peoples, issued a denunciation of the act "of violence" on Oct. 22: "We deeply regret and at the same time denounce that in recent days, we have been victims of acts of violence, which reflect religious intolerance, racism, vexatious attitudes, which above all affect indigenous peoples, and demonstrate a refusal to build new paths for the renewal of our Church."

And Vatican editorial director Andrea Tornielli published an opinion piece on Vatican News blasting the removal as a "violent and intolerant gesture."

"In the name of tradition and doctrine, they contemptuously threw away a symbol of maternity and sacredness of life," he said.

In the days before the removal, Vatican spokesmen were unable to explain what the figures symbolized, rejecting claims she represented the Virgin Mary, while also denying she was pagan.

10/25/2019: This article has been updated with a statement from the Italian Carabinieri.

10/27/2019: This article has been updated to clarify the commander of the Carabinieri's statement regarding the possibility of displaying Pachamama at the closing Mass.