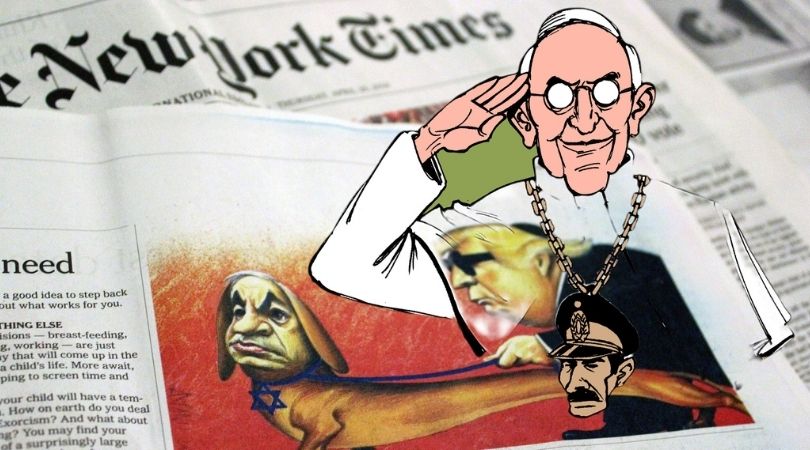 NEW YORK (ChurchMilitant.com) - A day after the U.S. Supreme Court struck down restrictions on worship, Pope Francis has launched a vituperative assault on "personal freedom," publishing his invective against anti-lockdown Jews and Catholics in the vitriolically anti-Semitic New York Times (NYT).

The pontiff's Thanksgiving Day op-ed smeared Wuhan virus lockdown protestors as people who find it "all too easy" to take the idea of "personal freedom — and turn it into an ideology, creating a prism through which they judge everything."

Commending "most governments" for acting "responsibly" and "imposing strict measures to contain the outbreak," Francis condemned "some exceptions" of "some governments that shrugged off the painful evidence of mounting deaths, with inevitable, grievous consequences."

The pontiff attacked anti-lockdown protestors for "refusing to keep their distance, marching against travel restrictions — as if measures that governments must impose for the good of their people constitute some kind of political assault on autonomy or personal freedom!"

Urging readers to look to the "common good" as "much more than the sum of what is good for individuals," Francis called for "solidarity" as the "solid foundation" for building "a better, different, human future."

Catholics and Jews blasted Francis for showing contempt toward the U.S. judicial process while teaming up with a rabidly left-wing Jew-hating newspaper to attack freedom of religion and assembly.

"Why is Pope Francis writing for an anti-Semitic newspaper that has consistently baited Jews for decades?" Jewish anthropologist and columnist Karen Harradine asked.

"Not only does the NYT publish anti-Semitic cartoons which wouldn't look out of place in Der Stürmer, but they also hound Jewish journalists out of their jobs," Harradine said, in comments to Church Militant.

The lockdown is not the only solution; on the contrary, it appears to be the worst solution.

In April, the Times outraged Jews after it published a cartoon showing Israel's prime minister, Benjamin Netanyahu, as a guide dog wearing a Star of David on his collar and leading a blind Trump wearing a skullcap.

"In July, editor Bari Weiss resigned from the NYT after colleagues called her a 'Nazi' and a 'racist' because of her support for Israel. The paper also cheers on New York governor [Andrew] Cuomo and Mayor [Bill] de Blasio's prejudicial and systematic targeting of Orthodox Jews in New York City," noted Harradine.

In a heinous tradition of scapegoating Jews, Cuomo and de Blasio blame Orthodox Jews for the spread of COVID-19 and lambast them for having the temerity to come together to pray to G-d. Yet these two Democrat politicians and the NYT championed the summer Black Lives Matter protests, despite these attracting thousands more than a Brooklyn synagogue or park ever does. That BLM is an anti-Semitic, neo-Marxist organization with a core hatred of Israel is another blight on the NYT's anti-Semitism record.

"If Pope Francis wants to promote himself as an interfaith peacemaker, then writing for the anti-Semitic NYT is the wrong way to go about this," Harradine remarked.

Why is Pope Francis writing for an anti-Semitic newspaper that has consistently baited Jews for decades?"

Historians have recorded the NYT's systemic anti-Semitism with Laurel Leff's Buried By The Times: The Holocaust and America's Most Important Newspaper. It details how "news of the Nazis' 'Final Solution' was hidden from Times readers and — because of the newspaper's profound influence on other media — from the larger American public."

Leff's book, published by Cambridge University Press, examines "the many decisions that were made up and down the chain of command at the Times — decisions that ultimately resulted in the minimizing and misunderstanding of modern history's worst genocide." Leff probes the assimilationist desire of the Jewish owner of the Times to evade dealing with the uniquely Jewish nature of the genocide.

There is not a word from the pope in support of religious freedom or freedom of worship — a concept the Church always defends against persecutions. Instead, Francis speaks of an elusive common good that is superior to the individual good and freedom of the individual.

From a medical point of view, it isn't clear why the bishop of Rome should endorse choices that led to the lockdown when, instead, there is scientific evidence that says that the virus can be faced and can be treated without the suffocating constraints ... [T]he lockdown is not the only solution; on the contrary, it appears to be the worst solution.

Gulisano asked if the pontiff had taken into account the disabled and elderly in retirement homes who are increasingly victims of "isolation" and "therapeutic abandonment" as a result of lockdowns.

The celebrated essayist also noted that Pope Francis' op-ed was "an adaptation of a book that the pope wrote in the form of an interview with English journalist Austin Ivereigh."

In a 5–4 decision, the Supreme Court ruled: "The restrictions at issue here, by effectively barring many from attending religious services, strike at the very heart of the First Amendment's guarantee of religious liberty."

"Even in a pandemic, the Constitution cannot be put away and forgotten," the decision stressed.

Who knew public health would so perfectly align with secular convenience?

A commentor noted that Barrett had not toed the line of a papal diktat despite Democrat senator Dianne Feinstein's notable accusation against the faithful Catholic using the words: "The dogma lives loudly within you."

The ruling responded to complaints filed by the Orthodox Jewish Agudath Israel of America and Catholic Diocese of Brooklyn against the three-color coronavirus risk system New York governor Cuomo instituted through executive order in early October.

"Catholics who watch a Mass at home cannot receive Communion, and there are important religious traditions in the Orthodox Jewish faith that require personal attendance," the justices ruled.

"Who knew public health would so perfectly align with secular convenience?" Justice Gorsuch wrote in a separate opinion, asking why the coronavirus should affect religious services more than secular establishments like liquor stores and acupuncturists, which are allowed to remain open.

"At the flick of a pen, they [governors] have asserted the right to privilege restaurants, marijuana dispensaries and casinos over churches, mosques and temples," he noted, a distinction that Pope Francis failed to make in his op-ed.