While being interviewed for the feature-length documentary Francesco, the pontiff insisted that homosexuals not only "have a right to be a part of the family" but also "have a right to a family."

"Nobody should be thrown out, or be made miserable because of it," asserts Francis in the film, which premiered Wednesday at the Rome Film Festival, according to Catholic News Agency.

"What we have to have is a civil union law; that way they are legally covered," notes Francis, trashing the 2003 declaration by the Congregation for the Doctrine of the Faith, which categorically states "that respect for homosexual persons cannot lead in any way to approval of homosexual behavior or to legal recognition of homosexual unions."

"Pope Francis' support for same-sex civil unions is a major step forward in the church's support of LGBTQ people. It is in keeping with his pastoral approach to LGBT people, including LGBT Catholics, and sends a strong signal to countries where the church has opposed such laws," homosexualist activist Fr. James Martin, S.J. triumphantly tweeted.

Speaking to Church Militant, theologian and cultural critic Fr. Athanasius St. Michel noted that "the same strategy to reconfigure Christian ethics that has perverted and polluted other [Protestant] ecclesial bodies is now being repeated in the Vatican."

From his retreat in northern France, he explained:

There is an awful inevitability about the latest papal pronouncement on sex. It is like watching Antonio Gramsci's march through the institutions affected in microcosm in the Vatican itself.

As usual, Pope Francis has begun the reconfiguration with the abuse of the talismanic term "pastoral." But how can there be different forms of "truth." How can a pastoral truth be different from a dogmatic or theological truth? The Catholic Church once claimed to be the agency of universal truth, but Francis is replacing this with pastoral truth.

Does he not know that by claiming homosexual couples have a right to family life, he is invoking an antithetic scale of humanistic values — human rights — and redefining "family" in a way that will diminish and destroy the claims of the heterosexual biological family?

As archbishop of Buenos Aires, Francis supported civil unions for homosexual couples as an alternative to same-sex marriages. This is, however, the first time he has publicly backed gay civil unions as pope.

Chilean Juan Carlos Cruz, a homosexual and survivor of clergy sexual abuse, is one of the main characters in the documentary by Evgeny Afineevsky. Cruz said that Francis told him that God made Cruz gay during his meeting with the pontiff in 2018.

In those situations where homosexual unions have been legally recognized or have been given the legal status and rights belonging to marriage, clear and emphatic opposition is a duty.

The biopic addresses the pope's pastoral outreach to LGBT individuals. It shares the story of Francis encouraging two Italian men in a gay partnership to raise their children in their local parish church.

In the 2013 book On Heaven and Earth: Pope Francis on Faith, Family, and the Church in the Twenty-First Century, Francis calls laws "assimilating" homosexual relationships to marriage "an anthropological regression."

He also notes that if same-sex couples "are given adoption rights, there could be affected children. Every person needs a male father and a female mother that can help them shape their identity."

Fr. Athanasius predicts: "We know the next chapter. Children will be bought and separated from their biological parents and sold to gay couples to foster their sense of human rights in a neo-family context. Will the children have no human rights? Not if Pope Francis pursues his pastoral policy of relativism."

We know the next chapter. Children will be bought and separated from their biological parents and sold to gay couples to foster their sense of human rights in a neo-family context.

"The legal recognition of homosexual unions or placing them on the same level as marriage would mean not only the approval of deviant behavior, with the consequence of making it a model in present-day society, but would also obscure basic values which belong to the common inheritance of humanity," warned the CDF statement issued by then-Cdl. Joseph Ratzinger.

"In those situations where homosexual unions have been legally recognized or have been given the legal status and rights belonging to marriage, clear and emphatic opposition is a duty. One must refrain from any kind of formal cooperation in the enactment or application of such gravely unjust laws and, as far as possible, from material cooperation on the level of their application," the document sternly proclaimed.

Rewriting of Doctrine Ahead?

Pro-LGBT Catholic activists have been arguing that if Pope Francis can change church teaching on the death penalty, he can also rewrite doctrine on homosexuality. Francis DeBernardo of New Ways Ministry writes:

It's important for Catholic advocates for LGBT equality to take note of this change because, for decades, Catholic opponents of LGBT equality argued that it is impossible to change church teaching. They often pointed to the fact that condemnations of same-sex relationships were inscribed in the Catechism, and so [they] were not open for discussion or change. Yet, the teaching on the death penalty is in the Catechism, too, and, in fact, to make this change in teaching, it was the text of the Catechism that Francis changed.

We also asked if the Vatican had changed its position on homosexuality — whether the pope no longer regarded as binding the magisterial teaching as laid out in the Catechism of the Catholic Church that homosexual acts are 'intrinsically evil.'

The Vatican did not respond as of press time.

In 2016, Tutu's daughter Mpho Tutu, who is an Anglican priestess, "married" Marceline van Furth in a lesbian civil wedding in the Netherlands.

Grand Imam of al-Azhar Ahmed al-Tayyeb, who is Pope Francis' co-signatory to his Human Fraternity compact, has called homosexuality a disease.

"My opinion was — and I said this [in the West] — that no Muslim society could ever consider sexual liberty, homosexuality and so on to be a personal right. Muslim societies consider these things to be diseases, which must be fought and treated," al-Tayyeb said in 2018. 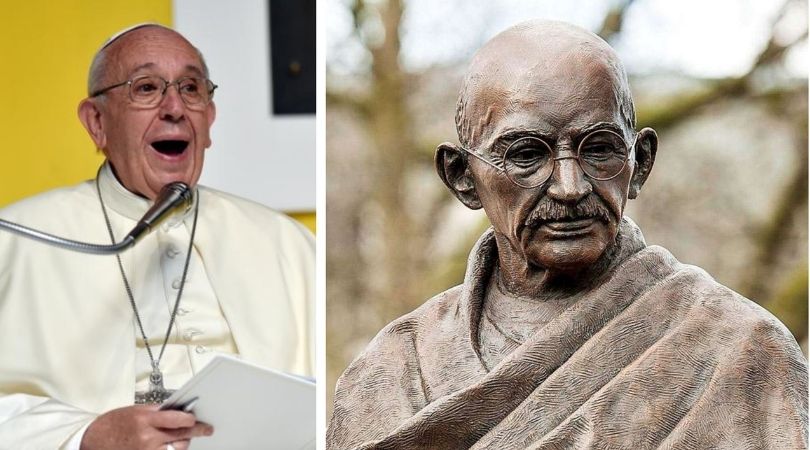