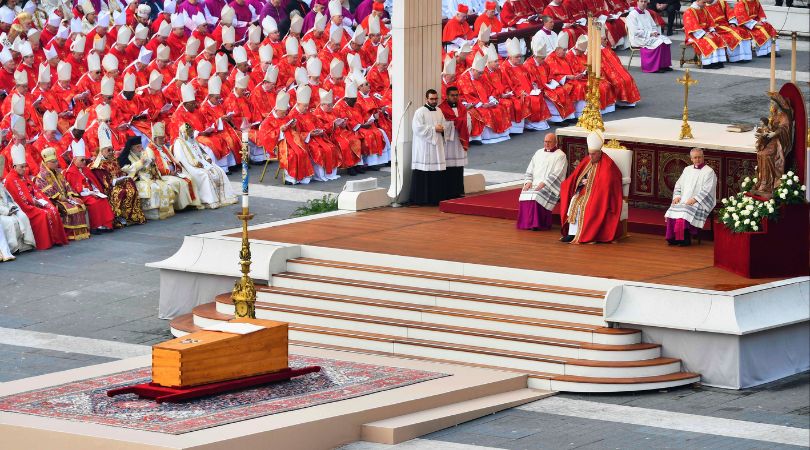 At the funeral Mass for Benedict XVI, the cupola of St. Peter's Basilica was shrouded in an impenetrable fog. But that did not dampen the reverent jubilation of the crowds pressing towards the colonnades of Bernini, so felicitously described as "the motherly arms of the church."

I was one of the hundreds of thousands of faithful who braved a chilly Roman morning to say "Auf Wiedersehen! Arrivederci!" to our beloved Papa Benedetto.

For those with eyes of faith, it was like a surreptitious snapshot from the book of Revelation: a multitude from every tribe and tongue and people and nation thronging the gates of paradise.

I am fighting back tears as I write this, but they are not tears of sorrow. For I had a very real sense of God's promise to wipe away every tear and destroy death in the heavenly Jerusalem — a place where there will be no more mourning, crying, or pain.

Daniela and her colleague were standing near St. Peter's railway station and welcoming us with cards depicting a sweetly smiling Benedict. Written in bold, the cards had a banner: "Arrivederci in Paradiso Benedetto XVI" (see you in Heaven Pope Benedict XVI).

I asked Daniela, a member of the Gioventù Ardente Mariana movement, why they had taken the time to greet us.

"Pope Benedict was the bishop of Rome, and we are Romans," she said. "We loved Benedict and want to share our holy joy for the privilege of having him as the successor of St. Peter who was chosen by the Holy Spirit to lead the Church," Daniela told me.

Daniela and her colleague set the tone for the funeral. The card she gave me bore half of a verse from John's gospel in Italian: "The good shepherd lays down his life for the sheep" (John 10:11).

God stoops down to touch earth so that we might be raised to enter Heaven.

The card also quoted Benedict: "Being a Christian gives me knowledge and finding friendship with the judge of my life, allowing me to cross the dark door of death with confidence."

Singing Psalm 23 in Latin during the Requiem Mass, the choir echoed the same assurance: "Nam, etsi ambulavero in medio umbrae mortis, non timebo mala, quoniam tu mecum es" (For though I walk amid the shadow of death, I will fear no evil, for Thou art with me).

Fittingly, an epistle penned by the "rock" on which Jesus built his Church, echoed the "sure hope and the promise of an inheritance that can never be spoilt or soiled and never fade away, because it is being kept for you in the heavens" (1 Peter 1:3–4).

Jostling for the best view of the altar from the ancient terrace, I did not want to miss the Lord's message for his people through his Holy Word: "Through your faith, God's power will guard you until the salvation which has been prepared is revealed at the end of time" (1 Peter 1:5).

Being a Christian gives me knowledge and finding friendship with the judge of my life.

Indeed, Catholics who came to bid Benedict farewell were not mourning his demise but celebrating the promise of eternal life! How could we not do this, especially when in the gospel reading chosen for the papal funeral, Jesus would assure the penitent thief, "Indeed, I promise you, today you will be with me in paradise" (Luke 23:43).

I wondered, though, why the Vatican's liturgists had chosen to have scriptures read in Spanish, English and Italian, when Benedict's fellow countrymen were making their presence felt in the crowds with several banners in German reading "Danke Papst Benedikt."

In his homily, Pope Francis exhorted us to "patiently hope that the Lord will be faithful to his promise, the promise he made to our fathers and to their descendants forever."

Francis ended his sermon with the valediction: "Benedict, faithful friend of the Bridegroom, may your joy be complete as you hear his voice, now and forever!"

But in the press gallery, reporters were wondering why Francis' tribute to Benedict in the sermon seemed like a hit-and-miss. Those of us who have preached at funerals know that a homily demands a faithful exposition of Scripture and an exhortation based on the text.

"But, come on, surely Francis could have chucked in more than one line as a tribute to his predecessor," my colleague in the gallery told me as she was zooming in and catching Cdl. Zen in his red vestments.

Did the crowds make up for Francis' apparent lack of enthusiasm? Boy, did they! They applauded as Benedict's plain cypress coffin was brought in and placed before the altar. They cheered and shouted their "encore" as Benedict was taken out at the end of the service!

And the 120 cardinals, 400 bishops and 3,500 priests, accompanied by deacons and nuns and religious of all stripes, put their hands together and joined the laity in making a joyful noise in thanksgiving for the life and ministry of their pope emeritus.

Things will never be the same with Benedict gone.

As I plodded back home, I kept staring at the painting on the cover of the Requiem Mass booklet. It's one of Michelangelo Merisi Caravaggio's masterpieces that marries high drama to deep theology.

At one extremity of the painting, one sees the dead Jesus' fallen arm and His immaculate shroud touching the stone slab. At the other extremity, Mary of Clopas raises her hands to Heaven. Caravaggio is reminding us that God stoops down to touch earth so that we might be raised to enter Heaven.

Taking another look at the card Daniela gave me, I saw that it had a prayer inscribed on it: "Now, you have finally met your Lord; pray for us from Heaven and for the Church you loved so much. Thank you, Holy Father Emeritus Benedict XVI."