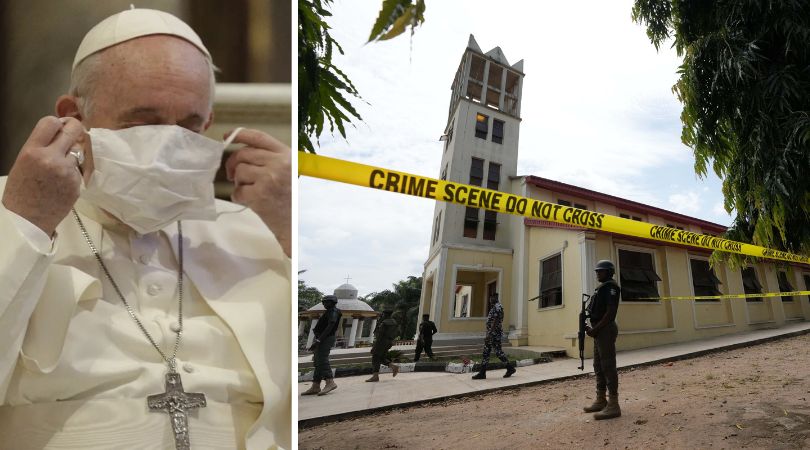 VATICAN CITY (ChurchMilitant.com) - Pope Francis and the Nigerian bishops are refusing to name Muslim Fulani herdsmen as the gunmen who slaughtered over 70 Catholics in St. Francis Xavier Church, Ondo, on Pentecost Sunday.

The pontiff's second-in-command, Cdl. Pietro Parolin, told Bp. Jude Arogundade of Ondo in a telegram sent Monday that Francis was praying for "the conversion of those blinded by hatred and violence so that they will choose instead the path of peace and righteousness."

Arogundade's office issued a public statement hours after the slaughter, calling the attackers "unknown gunmen" and stating that "the identity of the perpetrators remains unknown," even though eyewitnesses identified the four assailants as Fulani herdsmen.

While the cardinal acknowledged that eyewitnesses had confirmed the perpetrators were Muslim herdsmen, he cautioned that "civil and government authorities have said that we should not rush to conclusions" but "should wait for their investigation."

We should avoid saying this is foolhardy Muslims killing Catholic Christians.

The cardinal admitted it was impossible to prevent people from "having a sense of feeling that they are attacked because they are Christians" when an attack is perpetrated against a church on a Sunday.

Speaking to Church Militant, international consultant on Islamic persecution of Christians Dr. Martin Parsons confirmed that the attack had all "the hallmarks of a major Islamist inspired attack — including specific targeting of churches during prominent Christian festivals."

"While it is unusual for such attacks to take place in the southwest of Nigeria," observed Parsons, "suspicion inevitably falls on Fulani and Boko Haram and Islamic State West Africa Province jihadists."

Since 2018, the Fulani have been killing more people than Boko Haram — once the world's deadliest terrorist organization. Whilst Western media outlets continue to claim that this is a conflict between nomadic herders (Fulani) and settled farmers (the Middle Belt villages), the truth is somewhat more disturbing.

Robert Spencer, historian of Islam and author of 23 books on Islam and the Middle East, told Church Militant that "the pope and the Vatican are afraid to name the perpetrators of the church massacre because to do so would interfere with the false narrative they have been propagating regarding Islam."

The European Parliament does not want to take a stand on the murder of the young Nigerian for being a Christian.

Spencer, author of the recent bestseller The History of Jihad: From Muhammad to ISIS, explained:

Francis has claimed that "authentic Islam and the proper reading of the Qur'an reject every form of violence." When Muslims commit acts of violence in the name of Islam and in accord with its authentic teachings, the pope is backed into a corner.

He has to ignore the theological root causes of the massacre and obfuscate the identity of the perpetrators or admit that his rosy view of Islam, the basis for his entire enterprise of "dialogue," is based on false premises.

But Cdl. Onaiyekan insisted that the Catholic Church would continue to dialogue with Muslims since the "only solution" to the problem was for "Christians and Muslims to join hands and face these criminals together."

Speaking to Vatican News after Christian student Deborah Samuel Yakubu was stoned and burned to death by Muslim classmates who accused her of blasphemy, the cardinal said that such incidents "feed into the narrative of a Nigeria that I do not believe is fair, namely one that says Nigeria is a country where Muslims are persecuting Christians."

Islam is not terrorist. It is not true and it is not fair.

Yakubu was accused of insulting the prophet Muhammad after she thanked Jesus in a class WhatsApp group for helping her in an exam.

The cardinal appeared to defend Islam's Shariah law when he said that judgments on blasphemy "should never be left to mob action, but to a properly constituted court of law in which a competent judge will determine whether indeed this is a case of blasphemy."

Meanwhile, shamed for their refusal to discuss the religiously motivated murder of Deborah Samuel, the European Parliament reversed course on Monday, agreeing to hold a discussion on the genocide of Christians in Nigeria.

On May 20, 244 MEPs voted against the motion to debate the ethnic cleansing of Christians in Nigeria, while 231 voted for the motion.

Spanish MEP Margarita de la Pisa tweeted: "What a shame! The European Parliament does not want to take a stand on the murder of the young Nigerian for being a Christian. They do not want to condemn the persecution that Christians are suffering. This is inexcusable!"

Earlier, senior Nigerian cleric and imam of the Abuja National Mosque, Ibrahim Maqari, justified the murder of Deborah Samuel on Twitter, warning, "Everyone should know that we Muslims have red lines that should not be crossed."

"The dignity of the prophet is at the forefront of these red lines. If our grievances are not properly handled, we should not be criticized for handling them ourselves," Maqari wrote.

Two Catholic churches in the diocese of Sokoto were attacked and partly burnt by youths who were demanding the release of the suspected killers of Deborah Samuel. The bishop of Sokoto, Matthew Hassan Kukah, has suspended all Masses in the state.

Pope Francis has repeatedly refused to identify Islamic jihadism as the primary motivation for the persecution.

Everyone should know that we Muslims have red lines that should not be crossed.

Francis said he was praying for Nigeria following what the pontiff called a "terrorist" massacre of 110 farmers, in which Muslim jihadis beheaded an estimated 30 people during Advent 2020.

"Islam is not terrorist. It is not true and it is not fair," the pontiff told reporters during an in-flight press conference in 2016. "I do not want to speak of Islamic violence, because then I would have to speak of Catholic violence, watching the news and seeing what happens just in Italy."

One of the main causes of terrorism lies in the lack of economic opportunities for young people in Europe, who, as a result, turn to fundamentalist groups such as ISIS, Francis added.