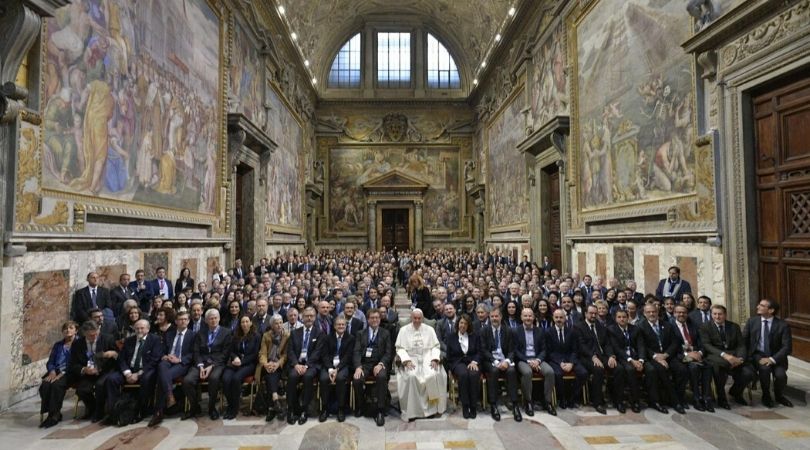 VATICAN (ChurchMilitant.com) - Pope Francis is attacking politicians who oppose the homosexual agenda as evidence of "Nazism," while launching his strongest attack yet on capitalism and repeating his call for the abolition of the death penalty.

“It is no coincidence that in these times, emblems and actions typical of Nazism reappear, which, with its persecutions against Jews, gypsies and people of homosexual orientation, represents the negative model par excellence of a culture of waste and hatred,” he said in his address to the International Association of Penal Law at the Sala Regia in the Apostolic Palace of the Vatican Friday.

"And I must confess to you that when I hear a speech [by] someone responsible for order or for a government, I think of speeches by Hitler in 1934, 1936," he said. "In the last century we saw so many brutalities against the Jewish people, and we were all convinced that this was over. But today the habit of persecuting the Jews, brothers and sisters, is here reborn. This is neither human nor Christian."

Condemning the "punitive demagogy "in several countries, Francis called upon the legal community to prevent such behavior from degenerating “into an incentive to violence or disproportionate use of force."

"They are inadmissible behaviours in the rule of law and generally accompany racist prejudices and contempt for socially marginalized groups."

The pontiff was addressing 600 delegates at the 20th International Congress of Penal Law, the oldest association of specialists in criminal law, which brings together university professors, lawyers, magistrates, researchers, students and criminal law practitioners. The theme of their Nov. 13–16 congress is "Criminal Justice and Corporate Business."

The pope went on to denounce the "idolatry of the market," blaming "global financial capital" for "the origin of serious crimes not only against property but also against people and the environment."

"It is responsible for organized crime, the over-indebtedness of states and the plundering of the natural resources of our planet."

He also raised the specter of "ecological sins," raised at the recent Amazon Synod: "We are thinking of introducing ecological sin into the catechism."

"[T]he Synod Fathers proposed to define ecological sin as an action or omission against God, the community and the environment," he noted, going on to define "ecological sin" as "a sin against future generations and is manifested in acts and habits of pollution and destruction of the harmony of the environment" and attacking global corporations for "ecocide."

The Synod Fathers proposed to define ecological sin as an action or omission against God.

"An elementary sense of justice would imply that some behaviors, of which the corporations are usually responsible, do not go unpunished. In particular, all those that can be considered as 'ecocide,'" he said.

"In this circumstance, and through you, I would like to appeal to all the leaders and contacts in the sector to contribute with their efforts to ensuring adequate legal protection of our common home," he continued.

Repeating his call for the abolition of the death penalty, the Holy Father pleaded with jurists "not to execute the aggressor."

Lambasting the "punitive irrationality" of the justice system, he asked jurists to "seriously reconsider the life sentence."

"I have indicated that between the punishment and the crime there is an asymmetry and that the fulfilment of an evil does not justify the imposition of another evil as an answer. It is a question of doing justice to the victim, not of executing the aggressor," he stressed.

In the Christian vision, the model of justice finds perfect incarnation in the life of Jesus, who, after being subject to injustice, brings a message of peace, forgiveness and reconciliation. These, he said, are values that are difficult to achieve but necessary for the good life of all.

At the 19th Congress of the International Criminal Law Association in 2014, the Pope warned that increasingly harsh sentencing does not solve social problems or reduce crime and that crime is frequently "rooted in economic and social inequality."

Calling for the abolition of the death penalty as well as life imprisonment, the Pope denounced what he called a "penal populism" that promises to solve society’s problems by punishing crime instead of pursuing social justice.