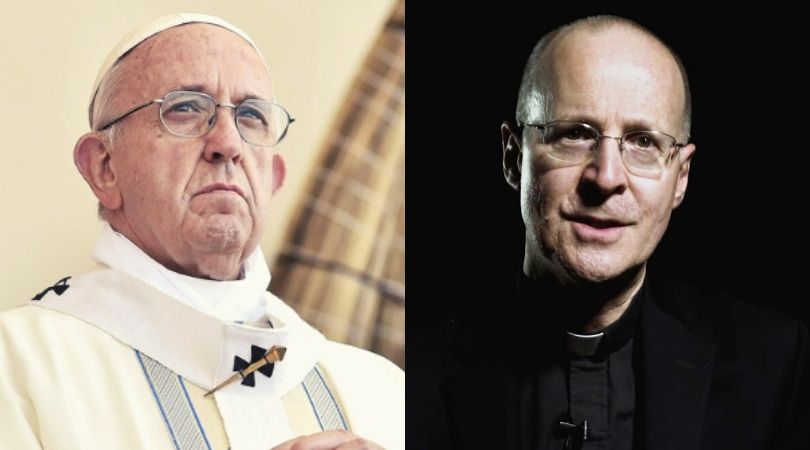 Francis allegedly complained about Jesuit to US bishops' delegation

Pope Francis spoke with Fr. Martin in a private one-on-one meeting last September. After the meeting, Fr. Martin used the fact that the pope had met with him to give greater legitimacy to his own pro-LGBT messaging. For instance, Martin said during a presentation to an LGBT group in early November, "This is a pope who uses signs to communicate. The meeting with him gave me and us a lot of currency."

But according to a report Thursday by Catholic News Agency (CNA), Francis recently told some American bishops he was angry that Fr. Martin is using the one-on-one papal meeting to give more credence to his own agenda.

An anonymous bishop told CNA, "The Holy Father's disposition was very clear: He was most displeased about the whole subject of Fr. Martin and how their encounter had been used. He was very expressive, both his words and his face — his anger was very clear. He felt he'd been used."

He told us that the matter had been dealt with — that Fr. Martin had been given a 'talking to.'

Another bishop commented, "He told us that the matter had been dealt with — that Fr. Martin had been given a 'talking to' and that his superiors had also been spoken to and made the situation perfectly clear to him."

Bishops from Arizona, Colorado, New Mexico, Utah and Wyoming came to Rome for their Feb. 10 ad limina visit, a trip to the Vatican that bishops in charge of dioceses must make once every five years. Typically, all the bishops from a given region will make their ad limina visit together.

The Pope's alleged comments about Martin came during the ad limina meeting.

Father Martin has been criticized by many Catholics for emphasizing "inclusion" of LGBT people in the Catholic Church while sidestepping issues of sexual morality.

In 2017, Fr. Martin published a book titled Building a Bridge, which called for "dialogue" between the Catholic Church and the LGBT community.

But most of the criticism directed at Fr. Martin is focused on what he says on social media and at speaking gigs.

During an event at Villanova University in 2017, Martin claimed that people who have left the homosexual lifestyle are in "conflict" with themselves — that their lives aren't "integrated" as the lives of sexually active homosexuals.

The Holy Father's disposition was very clear: He was most displeased about the whole subject of Fr. Martin and how their encounter had been used.

In that same interview, he affirmed the idea of gays kissing at the "sign of peace," telling a practicing homosexual who attends Mass, "I do hope in 10 years you'll be able to kiss your partner. Why not? What's the terrible thing?"

He also said that gays are not obligated to live chastely because they have not "received" the "teaching" of the call to chastity.

Again in 2017, at a Fordham University symposium, Martin described same-sex "marriage" as "a loving act" and said the Church must "reverence" it.

Additionally, Martin has been faulted for promoting transgenderism (including in children) and cheering for theological dissidents.

In a 2017 Facebook post, Martin defended the "right" of a young child to identify as the opposite sex and be treated as such in a parish religious education program.

He has spoken fondly of pro-gay theological dissidents such as Sr. Jeannine Gramick and Fr. Gregory Boyle.