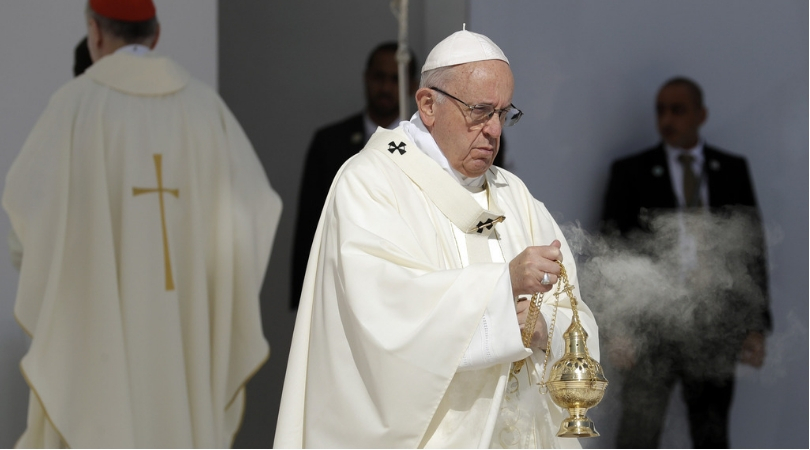 A divorced woman with two teenage children remarried a man who in time started sexually abusing her daughter. Even though the daughter informed the mother of the abuse, the mother did nothing. When the daughter revealed the abuse to one of her high school teachers, it led not only to the arrest of her stepfather, but it also resulted in the mother losing custody of her daughter.

The abuse the daughter experienced in this case is similar to the sex abuse of many minors, seminarians and young adults in the Catholic Church. Unfortunately, most Church officials who failed to investigate and report clerical sex abuse continue to enjoy "full legal and physical custody" of those whom they failed to protect.

The action taken by the court against the mother involves what in criminal law constitutes "omission." Essentially, omission occurs when a person fails to intervene and take corrective action when there is a rebuttable presumption of responsibility of care for the endangered party.

As soon as the mother was informed by her daughter that she was being sexually abused by her stepfather, she immediately should have investigated the allegation. By failing to investigate and report the behavior to authorities, the mother herself became implicated and was an accessory to her husband's criminal actions.

While this example of omission involved just one victim, consider a case involving multiple victims. If you are the archbishop of a large archdiocese and you receive multiple reports of sexual abuse, what should happen to you if you fail to investigate and report sexual predators to civil authorities?

Is this not what happened when Abp. Jorge Bergoglio received reports of sexual abuse involving children at the Antonio Próvolo Institute for Deaf and Hearing Impaired Children in Mendoza, Argentina? It is reported that one of the victims insisted that Pope Francis, before his election, knew about the sexual abuse at the institute. She stated that many of the victims came forward and tried to meet with then-Cdl. Bergoglio to no avail.

As the trial proceeds involving Fr. Nicola Corradi, Fr. Horacio Corbacho, Armando Gómez and other employees of the Próvolo Institute who either participated in the abuse or failed to report it, one can only wonder what action Argentine authorities might wish to take against Pope Francis in light of allegations of possible criminal omission on his part.

Clearly, Pope Francis knows he is guilty, otherwise he never would have asked the abuse victims who met with him in the Vatican for forgiveness for what happened. By asking for forgiveness and saying a prayer with the victims, did the Pope think the matter was over? If I have a dog whom I allow to run free and he bites your child, is it enough that I simply ask you to forgive me for what my dog did to your child?

Should I not pay for the medical bills you incurred and for any psychological harm your child suffered by being attacked by my dog? What should happen to me if you discover my dog continues to run free around the neighborhood endangering others?

Even if it is clear we are dealing with a serious case of omission on the part of Pope Francis, one still has to ask, "Why?" In the case of the remarried woman, she might not have wanted to risk losing the financial support her husband provided which would have been lost had she reported her daughter's abuse. But what would Francis have lost in so far as his omission occurred both before and after his papal election?

Had the cardinals who gathered in the Sistine Chapel known that Jorge Bergoglio had been covering up numerous sex abuse cases in his archdiocese as documented in Martin Boudot's Sex Abuse in the Church: Code of Silence, might he be sitting where he is today?

If he admits to covering up abuse not only before his papal election, but also during his pontificate in the way he handled sexual predators like Theodore McCarrick, Gustavo Zanchetta and others, might he be faced with the "honorable" decision of having to resign?

When the late Bp. Joseph Adamec was called to testify before the Pennsylvania grand jury about abuse within his Altoona-Johnstown diocese, he remained silent and invoked the Fifth Amendment protecting himself from self-incrimination when asked about what and when he knew about a number of abuse cases involving his priests.

Had he incriminated himself and admitted to being guilty of criminal omission, he knew he could have been sentenced to serve time in prison. Has the Pope invoked silence in order to avoid criminal prosecution especially in Argentina where he has yet to visit since his papal election?

Pope Francis learned that lying does not always work — even if you are the pope. When Juan Carlos Cruz, a Chilean sex abuse victim, wrote Pope Francis in 2015 asking for help after having been sexually abused by Fr. Fernando Karadima, Francis denied ever hearing from Cruz.

For three years, Francis ignored Cruz's allegations and defended Chilean Bp. Juan Barros Madrid who was alleged to be Karadima's homosexual lover. It was only in February of 2018 when Cdl. Sean O'Malley stated that he personally placed Cruz's letter into the Holy Father's hands in 2015 that Francis was forced to apologize and admit to his lie.

During an interview with the Mexican Televisa network, Pope Francis said that "about McCarrick, I knew nothing, obviously — nothing, nothing."

However, if that were true, then why did he contradict his sweeping denial by then adding the following remark that the Vatican Press Office initially failed to report: "I don't remember if [Viganò] told me about this"?

This contradiction led some investigative reporters to ask, "If he does not remember, how could he say with confidence that he knew nothing?" How many lawyers advise their clients to either take the Fifth Amendment and refuse to answer a potentially incriminating question or to respond by saying they "don't remember"?

It may also take secular media reporting and civil authorities in Argentina and other countries to expose criminal omission on the part of Pope Francis and so many of his brother bishops.

It has been reported that the Vatican has started using social media to recruit sufficient numbers of Swiss Guards to provide security for the Pope and members of the Roman Curia. Could it be that the sex abuse crisis that has moved many Catholics to leave the Church is also having a harmful effect upon the recruitment and retention of Swiss Guards?

When Illinois Attorney General Lisa Madigan discovered that Chicago Cdl. Blase Cupich and other Illinois bishops withheld the names of at least 500 priests accused of sexually abusing minors, she concluded that the Catholic Church is incapable of investigating itself and Church leaders "will not resolve the clergy sexual abuse crisis on their own."

It took The Boston Globe "Spotlight" team and the Pennsylvania grand jury to prompt some — but not enough — corrective action on the part of Church leaders in addressing clerical sex abuse in the United States. It may also take secular media reporting and civil authorities in Argentina and other countries to expose criminal omission on the part of Pope Francis and so many of his brother bishops.

Gene Thomas Gomulka is a retired Navy (captain) chaplain in Coronado, California, who was a priest (monsignor) of the Altoona-Johnstown diocese in Pennsylvania and who served on active duty at Marine Corps and Navy commands for over 24 years until his retirement in 2004.