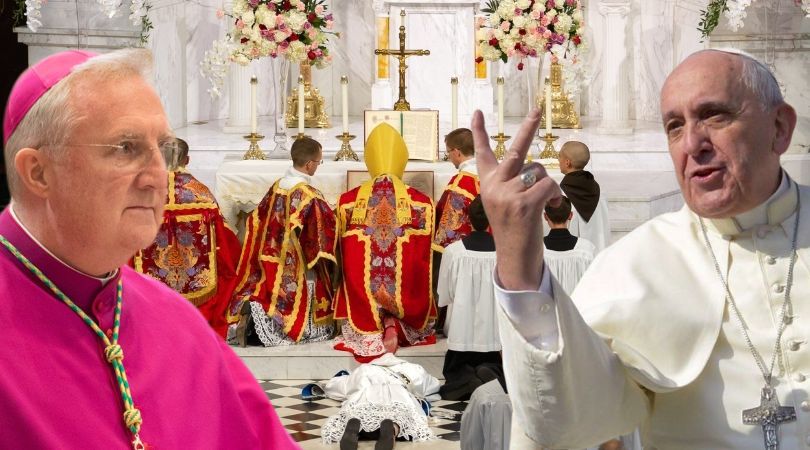 VATICAN CITY (ChurchMilitant.com) - A day after his 85th birthday, Pope Francis dealt traditionalist Catholics another crushing blow, suppressing the celebration of all sacraments according to rites predating the liturgical reform of the Second Vatican Council.

The Congregation for Divine Worship and the Discipline of the Sacraments (CDWDS) published the responsa with the "assent" and "consent" of the pontiff, noted the congregation's prefect, Abp. Arthur Roche.

Henceforth, priests will be almost entirely prohibited from celebrating the sacraments according to the pre-Vatican II rites of the Rituale Romanum and the Pontificale Romanum because these are liturgical books that "have been abrogated," the CDWDS note stated, lamenting the sacraments' exploitation "by ideological viewpoints."

While the Rituale Romanum contains liturgies for celebrating the sacraments of baptism, penance, matrimony and extreme unction; the Pontificale Romanum has rites for confirmation and the ordination of bishop, priest and deacon.

It is sad to see the hostility of the Holy See to those who wish only to remain in communion with it.

The Pontificale Romanum also contains liturgies for ordaining men to the minor orders of subdeacon, acolyte, lector and exorcist, as well as numerous blessings for consecrating altars and sacred objects.

This would pose a potential threat to bodies like the Priestly Fraternity of St. Peter and Institute of Christ the King Sovereign Priest whose clergy are ordained using pre-conciliar liturgies.

"It is sad to see the hostility of the Holy See turned towards those who wish only to remain in communion with it," Dr. Joseph Shaw, president of Una Voce International, told Church Militant.

FSSP ordinations in the old rite

Shaw, who is also chairman of the Latin Mass Society of England and Wales, elaborated:

The suppression of confirmation and the restriction of other sacraments to "personal parishes" (which are few and far between) are heavy blows to those Catholics attached to the old Liturgy who have been faithful to the pope and to their bishops.

Meanwhile, the Society of St. Pius X (SSPX) continues to enjoy a special privilege of faculties to give absolution (in the older form) directly from the Holy Father, not from their local bishop. It is pretty difficult to discern what message Catholics are supposed to gather from this.

The responsa further threaten to punish priests who are permitted to celebrate the TLM but who do not "recognize the validity and legitimacy of concelebration" and "refuse to concelebrate, in particular, at the Chrism Mass."

Again, it seems that priests be regarded with suspicion if they exercise their right under canon 205 not to concelebrate.

The "explicit refusal" to concelebrate "seems to express a lack of acceptance of the liturgical reform and a lack of ecclesial communion with the bishop," the Vatican warned, "both of which are necessary requirements in order to benefit from the concession" to celebrate the TLM.

Before a recalcitrant priest is banned from celebrating the TLM, the responsa instruct the bishop to "offer the priest the necessary time for a sincere discussion on the deeper motivations that lead him not to recognize the value of concelebration."

"Again, it seems that priests be regarded with suspicion if they exercise their right under canon 205 not to concelebrate, and the priestly institutes seem to be forbidden the use of the older liturgy for ordinations," Shaw commented.

The CDWDS responsa underlined the instruction from Traditionis Custodes insisting that parish churches and "new personal parishes" should not be allowed to host celebrations of the Eucharist according to the old rite.

"The exclusion of the parish church is intended to affirm that the celebration of the Eucharist according to the previous rite, being a concession limited to these groups, is not part of the ordinary life of the parish community," it stressed.

According to the responsa, in exceptional circumstances, "only if it is established that it is impossible to use another church, oratory or chapel" can the diocesan bishop grant a parish church permission to celebrate the TLM.

There is no intention in these provisions to marginalize the faithful who are rooted in the previous form of celebration.

According to the Vatican, "the assessment of this impossibility must be made with the utmost care." Moreover, the responsa forbids the TLM from being advertised, stating: "Such a celebration should not be included in the parish Mass schedule" and "should not be held at the same time as the pastoral activities of the parish community."

"It is to be understood that when another venue becomes available, this permission will be withdrawn," the responsa noted, asserting that "there is no intention in these provisions to marginalize the faithful who are rooted in the previous form of celebration."

Catholics who prefer the TLM are to be reminded that they are allowed to celebrate the old rite as "a concession to provide for their good" and "not [as] an opportunity to promote the previous rite."

According to an explanatory note, priests cannot offer the TLM on days when they also celebrate Mass in the new rite because "there is no 'just cause' or 'pastoral necessity' as required by canon 905, §2: The right of the faithful to the celebration of the Eucharist is in no way denied, since they are offered the possibility of participating in the Eucharist in its current ritual form."

Moreover, if a priest who is authorized to celebrate the TLM falls sick at the last minute, he cannot delegate the celebration of the Mass to a substitute priest who does not have prior approval.

In addition, priests may not celebrate an old rite Mass and the New Order one on the same day.

In a letter, Cdl. de Donatis declared he has "expressly forbidden" the celebration of all other sacraments and sacramentals, including the sacrament of confession, according to the ancient form, citing Francis' Traditionis Custodes as the reason for the ban.

A leaked July 28 letter from Cdl. Vincent Nichols (head of the Catholic Bishops' Conference of England and Wales) to Abp. Roche asked if Traditionis Custodes also "abrogates" the celebration of other sacraments, including a Requiem Mass, in the extraordinary form.

Roche's reply advocated "pastoral prudence" towards a "full implementation" of Traditionis Custodes "for a very limited time only," anticipating his "responsa ad dubia," which have achieved a near-complete ban of sacraments celebrated according to the old rite.