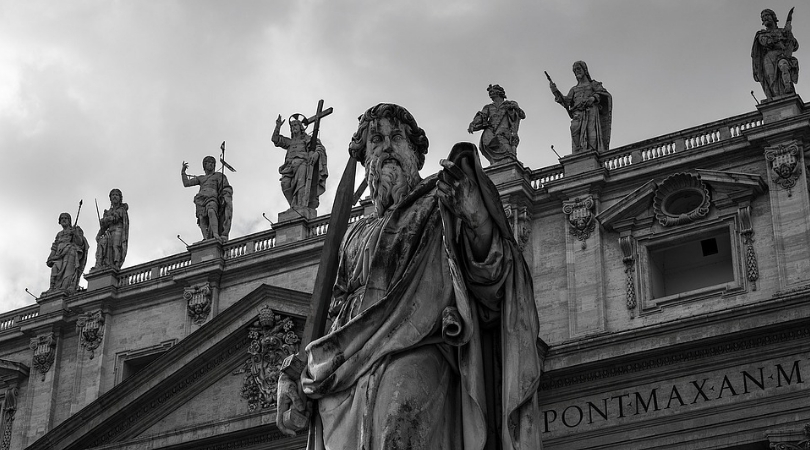 Antonio Socci on the Pan-Amazon Synod and the Francis pontificate

With the Vatican document for the Synod on the Amazon, the Bergoglian pontificate now has its official manifesto of the extreme left, based on “surreal socialism.”

In addition to Trump and Salvini, Brazilian President Bolsonaro is now among its enemies, all three of them emblems of the hated Western civilization of peoples of the Judeo-Christian tradition which does not deny its roots and identity.

This Vatican Instrumentum Laboris, writes José Antonio Ureta, "represents the total opening of the doors of the Magisterium to 'Indian theology' and to 'eco-theology,' two Latin American derivatives of liberation theology, whose cheerleaders, after the collapse of the Soviet Union and the failure of 'real socialism,' now attribute the historic role of revolutionary force to the indigenous peoples and to nature, in a Marxist key.”"

It's the total opening of the doors of the Magisterium to 'Indian theology' and to 'eco-theology.'

Among Catholics there is confusion. It seems that the "Church that goes out" that Bergoglio wanted is truly going out — going out of Catholicism. Cardinal Walter Brandmüller — a personal friend of Benedict XVI — is a distinguished historian of the Church, and yet he has not hesitated to use the strongest terms to speak out against this Instrumentum Laboris: "heretical" and "apostate."

Brandmüller speaks of the Synod as "an aggressive intrusion into the purely secular affairs of State and society in Brazil." He then condemns the theological absurdities of the document (in contrast to the texts of the Second Vatican Council) and the "anti-rational rejection of 'Western' culture which emphasizes the importance of reason." Such a Vatican Instrumentum, the cardinal thunders, "makes the synod of bishops and ultimately the Pope responsible for a grave violation of the depositum fidei, which has the consequence of the self-destruction of the Church or the changing of the Corpus Christi mysticum into a secular NGO with an ecological-social-psychological purpose."

The prelate concludes "forcefully" that the Vatican document "contradicts the binding teaching of the Church on decisive points and thus it must be qualified as heretical. Given that here even the fact of divine revelation is called into question, or misunderstood, one must also speak, in addition, of apostasy." This "constitutes an attack on the foundations of faith ... and therefore must be rejected with the utmost firmness."

The position of the cardinal, who is a close friend of Benedict XVI, is the position of Catholics. And one may also assume that this position is shared above all by Papa Ratzinger, who for years defended the Faith of the Church from the liberation theology and from all of its derivatives which today fill the Vatican document.

Despite a thousand pressures placed on him to do so, the Bergoglian court never obtained from Benedict XVI a refutation of the four cardinals of the Dubia (one of which was Brandmüller himself). Nor did it ever obtain a refutation of Abp. Carlo Maria Viganò, author of a historic testimony concerning the Vatican scandals.

Rather, in April Papa Ratzinger published his own testimony — specifically addressing the scandals — which offers reflections in line with the viewpoint of the aforementioned dubia cardinals and also offers Benedict's own contribution.

And we can also say that Ratzinger's document already anticipated the Vatican document on the Amazon. In fact, it condemns every attempt to replace the Church of Christ by creating "another Church, invented by us," because it is a church that — instead of concerning itself with the salvation of man – concerns itself with politics, the economy,and ecology (according to worldly ideologies), is “an experiment that has already been tried and failed.”

This text of Benedict has now been published in a volume by Cantagalli together with other texts of Bergoglio on the problem of the scandals, and the clerical choir is now singing the praises of this editorial work as a sign of the harmony that supposedly exists between the two popes.

But what harmony? Certain sections of the Bergoglian camp reacted violently last April when Benedict XVI announced the publication of his “notes.” There were those who suggested that they were not his own. Furthermore, Bergoglio was very careful not to spread the document, which had already been given to him by Benedict XVI, at the [February] Vatican summit on the scandals for which it was written.

Now instead, Francis contributes to this book with his writings in order to make people forget his failures in this area (highlighted by Archbishop Viganò). Bergoglio is taking shelter behind the authority of Benedict XVI. But it is enough to read the two texts to understand the two opposing positions.

Papa Ratzinger in these years has a dramatic task. On the one hand he must ward off all of the Bergoglian pulls which would carry the Church outside the bounds of Catholic doctrine (and his very presence is a deterrent which “admonishes” the Argentine). On the other hand, he must encourage those Catholics who are bewildered by the present disaster (including bishops and cardinals) and he must invite them to defend the faith of the Church while avoiding the production of irreparable ruptures.

The signals he gives are always discreet, but clear and comforting. Not only by means of powerful interventions like the document he issued last April, but also by recalling that he – that is, the pope – is there and Catholics should not feel that they are orphans. The latest (truly beautiful) book which Ratzinger has published, “Per Amore,” does not carry on its cover the title “Pope Emeritus” but the firm signature “Benedetto PP XVI.” These initials “PP” stand for “Pastor Pastorum” (or Pater Patrum), which is the title and prerogative of the reigning pontiff.

This is the umpteenth little sign of the dramatic situation of the Apostolic See, which cannot (yet) be clarified, but which confirms what Benedict XVI said in his final audience on February 27, 2013: “The “always” is also a “for ever” – there can no longer be a return to the private sphere. My decision to resign the active exercise of the ministry does not revoke this.”

In several of his recent letters – like his November 23, 2017, letter to Cardinal Brandmuller, in which he shows that he is very concerned about the situation of the present Church – Benedict XVI concludes by writing: “With my Apostolic blessing.” But only the reigning pontiff can give the Apostolic blessing (directly or by delegating others). If Benedict was no longer pope, doing so would be committing an abuse.

Moreover, many other signs should make one stop and reflect. Not only his dress, his name, his title, his coat of arms. Bergoglio himself calls him “Holiness” (because he is officially called “His Holiness Benedict XVI.”)

For the last six years — in Bergoglian circles — they have wanted to obtain from Benedict XVI a declaration in which he says that he no longer has anything to do with the papacy, and that he is only a bishop. But Benedict does not say these words.

A journalist from Corriere della Sera has now written that anonymous people (in unspecified circumstances) are said to have heard Benedict say, "The Pope is one, Francis." But this same journalist recently had the chance to meet Ratzinger and ask him questions, and Benedict XVI did not ever say this phrase to him.

Benedict is central in the Church today.

The thought of Benedict XVI is best expressed above all by the words of his right-hand man, Archbishop Georg Gaenswein, who said at an historic conference at the Gregorian University:

Before and after his resignation, Benedict understood and understands his task as participation in such a "Petrine ministry." He has left the papal throne and yet, with the step made on February 11, 2013, he has not at all abandoned this ministry. Instead, he has complemented the personal office with a collegial and synodal dimension, as a quasi-shared ministry. ... This is why Benedict XVI has not given up either his name, or the white cassock. This is why the correct name by which to address him even today is “Your Holiness"; ... He has not abandoned the office of Peter — something which would be entirely impossible for him to do following his irrevocable acceptance of the office in April 2005.

Gaenswein spoke of a "pontificate of exception."

There are those who believe that by a mysterious design of Divine Providence, the Church is being subjected to a very harsh trial, its own Good Friday, but that the presence of Benedict guarantees that She will not be shipwrecked. Certainly Benedict is central in the Church today. And one day everything will become clearer.

Antonio Socci is the author of The Secret of Benedict XVI (Angelico Press, 2019). For more information click here.