YEREVAN, Armenia (ChurchMilitant.com) - Pope Francis is defending his use of the term "genocide" in reference to the Armenian Massacre of 1915.

While speaking Friday at the presidential palace in Yerevan, Armenia's capital, Pope Francis departed from his prepared script to insert the word "genocide" to discuss the massacre.

"Sadly, that tragedy, that genocide," the Pope said, "was the first of the deplorable series of catastrophes of the past century, made possible by twisted racial, ideological or religious aims that darkened the minds of the tormentors even to the point of planning the annihilation of entire peoples."

Flying back to Rome Sunday from his three-day visit to Armenia, a reporter asked the Holy Father why he chose to "add openly the word genocide" to his prepared speech.

"In Argentina," the Pope explained, "when you spoke of the Armenian extermination, they always used the word 'genocide.'" He recalled that at the cathedral in Buenos Aires, there was "a stone cross in the third altar on the left, remembering the Armenian Genocide. ... I come from this word."

The Holy Father went on to reveal that he was persuaded against using this word. "When I arrived in Rome, I heard another word: 'The Great Evil' or the 'terrible tragedy,' ... and they tell me that no, that that is offensive, that of 'genocide,' and that you must say this."

Muslim Turkey has never admitted to, let alone apologized for, the massacre of 1.5 million Christians in 1915. The government criticized the Pope's use of the term "genocide" accusing him of adopting a "Crusade"-like mentality. Turkey further charged Pope Francis with having "bias" and practicing "religion-based discrimination" against their country.

Last year, Turkey recalled their ambassador from the Vatican in protest following the use of this same term by Pope Francis, who used the term while speaking to Armenians attending a Mass in Rome in April 2015. At that time the Holy Father stated,

The first genocide of the 20th century struck your own Armenian people, the first Christian nation, as well as Catholic and Orthodox Syrians, Assyrians, Chaldeans and Greeks. Bishops and priests, religious, women and men, the elderly and even defenseless children and the infirm were murdered.

The reporter who asked the question on the papal plane Sunday noted the strained relations with Turkey. "On a painful theme like this," the reporter asked, "do you think it's useful for peace in this complicated region?"

The Holy Father answered, "Last year, when I was preparing the speech, I saw that S.t John Paul II had used the word, that he used both: Great Evil and genocide. And I cited that one in quotation marks ... and it wasn’t received well."

Pope Francis explained that he "never said this word with an offensive intention, if not objectively." 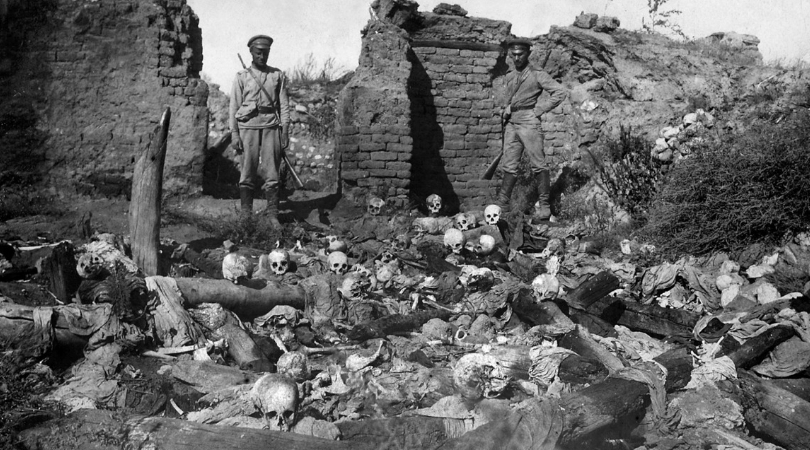