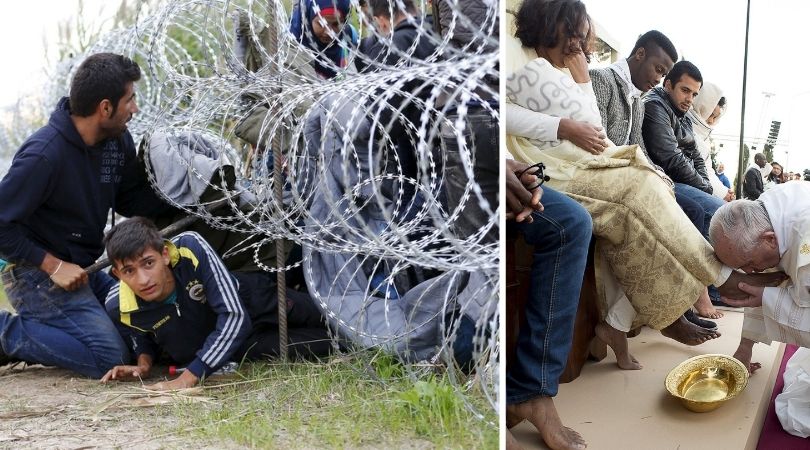 VATICAN (ChurchMilitant.com) - Pope Francis is channeling funds to illegal Muslim immigrants, who have stormed the Lithuanian border in record numbers.

The illegal border crossers, who are coming in via Belarus, pose a threat to the national security of the mainly Catholic country.

As Lithuania struggles to fight the influx, the Dicastery for Promoting Integral Human Development announced Saturday that Pope Francis had sent 50,000 euros through the apostolic nunciature in Vilnius to assist migrants in Lithuania on the Belarusian border.

Francis' support for the flood of illegals in the troubled region is the pontiff's second aid package since sending 100,000 euros to migrants on the border between Poland and Belarus in early January.

In a press statement, the Vatican said that the Holy Father's contribution to migrants on the Polish border was intended to "deal with the migratory emergency on the border between the two countries."

Both aid packages will be channeled through local Catholic aid agencies Caritas Vilnius and Caritas Polska. The agencies are primarily assisting Muslim migrants from Iraq, Syria, Afghanistan and Iran. A smaller number of refugees, some of them Catholic, come from Congo-Brazzaville, Togo, Cameroon and the Ivory Coast.

"What is noteworthy about the pope's donations to these migrants is that Poland is doing all it can to keep them [the migrants] out, charging that Belarus' [President] Lukashenko has weaponized Muslim migrants to weaken Polish civilization," historian of Islam Robert Spencer told Church Militant.

If the pope were dedicated to the destruction of Catholic Europe, what would he be doing differently?

Spencer, who has written over 21 books on Islam and the Middle East and is the author of recent bestseller Mass Migration in Europe: A Model for the U.S.?, elaborated:

The pope seems blithely unconcerned about the possibility of the weakening or destruction of what is left of Catholic European civilization at the hands of migrants who believe they are the "best of people" (Qur'an 3:110) and that non-Muslims are "the most vile of created beings" (Qur'an 98:6).

The pope shows no concern whatsoever for the national security concerns that are leading some Eastern European states to try to keep the migrants out. If the pope were dedicated to the destruction of Catholic Europe, what would he be doing differently? Nothing.

Over 4,200 irregular migrants crossed into Lithuania from Belarus last year. The crisis has been partly orchestrated by Belarus' authoritarian president Aleksandr G. Lukashenko. Lukashenko is pushing Muslim migrants into Lithuania and Poland in order to provoke the West.

Lithuanian authorities have called the immigrants a "hybrid weapon" wielded by Lukashenko to "attack the democratic world."

"The big problem with this migrant crisis is that among these migrants, there are a lot of economic ones, and they are being used for political purposes," Deimante Bukeikaite, general secretary of Caritas in Lithuania, admitted.

Muslim refugees will try to popularize their religion.

The so-called refugees pay human traffickers around $6,000 each for a "tour" of Lithuania. If they want to be transported farther into Western Europe, the price rises to $15,000, a report from the Konrad-Adenauer-Stiftung reveals.

A survey of Lithuanians revealed that citizens did not like that "most refugees are Muslims" and that "Muslim refugees will try to popularize their religion among us," even though respondents mostly disagree with propositions that all terrorists are Muslims. The survey found that women felt more threatened by Muslim refugees.

Lithuania is, however, willing to offer asylum to Belarusians fleeing the authoritarian regime of Lukashenko (who is referred to as "Europe's last dictator" in international press coverage). Most Belarusians are nominally Christian, with Eastern Orthodoxy being the nation's largest denomination.

The Muslim migrants are also supported by left-wing radical and hedge fund tycoon George Soros — who remains committed to open borders and the destruction of Western civilization. Hungary's prime minister, Viktor Orbán, has accused Soros of "plotting to overwhelm Hungary with Muslim immigrants in order to undermine its Christian heritage."

Fundacja Ocalenie, a pro-LGBT+ and pro-abortion organization, works with a network of radical left-wing organizations (under the banner of "Abolish Frontex") that is demanding the dismantling of the European Union's borders.

The pope seems unconcerned about the destruction of Catholic civilization.

Members of the network are calling for migrant detention centers to be burned down and for the sex trade to be liberalized. The Abolish Frontex network uses Marxist terminology and accuses Europe of being founded on colonialism, slavery and exploitation.

In July of 2021, Lithuania's Parliament responded to the crisis by approving new laws tightening the rules on migration and asylum.

As tensions escalated on the border, Lithuanian bishops called for prayers for Lithuania's border guards and soldiers who "face great challenges in protecting the state border, which is attacked in an insidious, cynical and inhumane way."

The bishops also asked the faithful to pray for refugees, migrants and asylum-seekers, "especially those who, due to manipulation, lies and malicious interests, ended up in a dead-end, stuck between two borders." They also asked for prayers "for all who seek a humane solution to this difficult problem."

Church Militant contacted Caritas Vilnius for comment. We received no response as of press time.