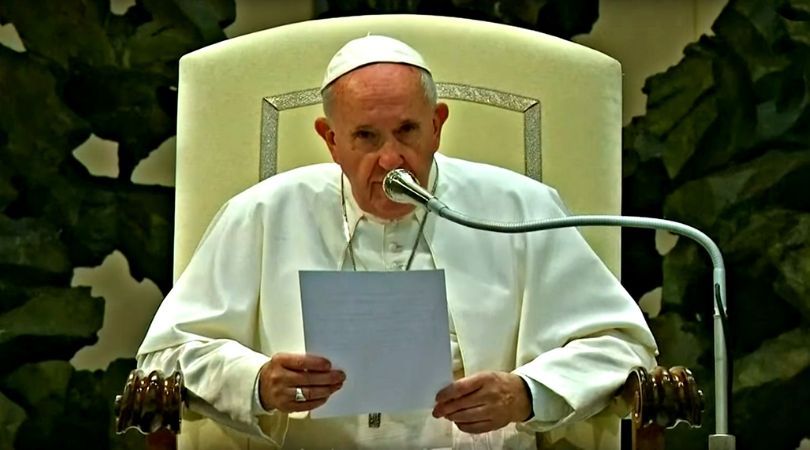 The importance of sharing, according to the Holy Father

ROME (ChurchMilitant.com) - Pope Francis has coined a new phrase to separate true Christians from false ones and explain his ideas on the importance of sharing.

Pope Francis continued his catechesis Wednesday based on the Acts of the Apostles, which is focused on the theme "integral communion in the community of believers."

Wednesday's general audience marked the sixth installment of this continuing catechesis on the Acts of the Apostles that began May 29.

This sixth installment concentrated on Acts 4:32: "They shared everything they had."

Francis introduced the expression 'spiritual tourism' to distinguish between authentic and inauthentic Christianity.

Francis began by saying that the Christian community is born from an outpouring of the Holy Spirit and grows from the leaven of sharing between brothers and sisters in Christ.

Later in his talk, he introduced the expression "spiritual tourism" to distinguish between authentic and inauthentic Christianity.

Those who behave in this way pass through the Church as a tourist. There are so many tourists in the Church who are always passing by, but never enter the Church: it is spiritual tourism that makes them believe they are Christians, while they are only tourists from the catacombs.

The Pope continued to say that Christians must be brothers and not tourists in the Church, adding that taking advantage of situations at the expense of others causes inner death.

Expounding further on this notion of being a spiritual tourist, Francis said: "And how many people say they are close to the Church, friends of priests, bishops, while they are only looking for their own interest. These are the hypocrisies that destroy the Church!"

The Pope then talked about the signal of true conversion as a Christian: "But that signal that your heart has converted is when the conversion comes to the pockets, how much it affects one's interest: there is where you see if one is generous with others, if one helps the weakest, the poorest."

Francis said that this conversion was one of holding material goods in communion:

The bond with Christ establishes a bond between brothers that flows together and expresses itself also in the communion of material goods. Yes, this way of being together, this way of loving oneself reaches the pockets, it also gets to shed the impediment of money to give it to others, going against one's own interest.

The Pope mentioned that one must help those who are materially poor as well as those who are spiritually so, defining the spiritual poor as "the people who have problems and need our closeness."

As if being a tourist is deadly sinful like rage, avarice, murder, lust and so forth!

Church Militant spoke with a Catholic priest going by "Fr. Edmond" about the Pope's recent audience and new phrase:

The Holy Father talked about a wide range of topics, so wide at times you could not make any sense at all what he was talking about! But wide ranging is a nice way to put it. But, all said, his words were particularly disparaging about tourists.

As if being a tourist is deadly sinful like rage, avarice, murder, lust and so forth! I find it strange that the Pope would even use the word tourist during the height of the summer season in Rome. Does he not know that Rome itself as a city, Italy as a country, depends on a great summer tourist season for the success of its annual budget! But perhaps the Holy Father just does not care about Italy's economic health, or how Rome's local tourist trade does. "Hey, you tourist Catholics out there, shame on you! You should have stayed in your own countries and given away all the money you spent to come to Italy in your own communities."

Paradoxically, Rome, that has subsisted for millennia on the contributions of grateful pilgrims visiting the See of Peter and visiting the tombs of St. Paul and the martyrs of the early Church, now has a Holy Father that could not care less about visiting the tombs of the saints or keeping the local economy vibrant! Wake up Rome, you have just entered a new period in your history, the Holy See wants to end the tourist trade!