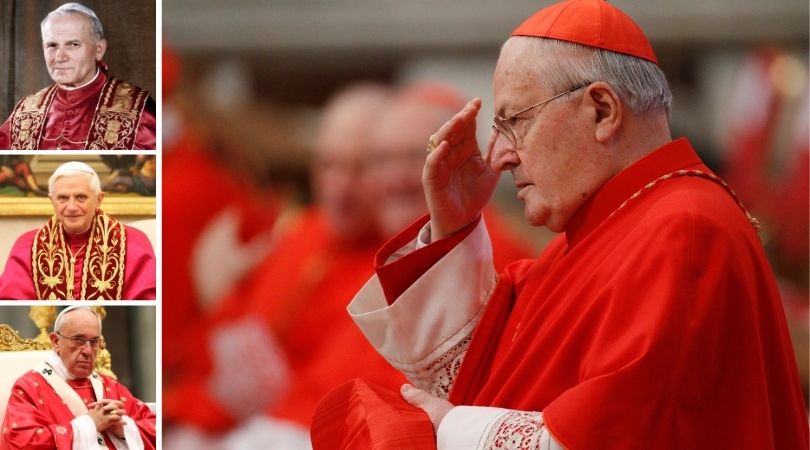 VATICAN CITY (ChurchMilitant.com) - The world's most powerful cardinal of recent times, who served under three popes, was outed the day after his death as a homosexual who rented gay prostitutes.

In the face of the explosive revelations of the prelate's gay lifestyle, Pope Francis paid glowing tribute to Cdl. Angelo Sodano, describing him as an "ecclesially disciplined man, a lovely shepherd, animated by the desire to spread the yeast of the gospel everywhere."

In a telegram of condolence to Sodano's sister, Francis praised the cardinal as an "esteemed man of the Church, who generously lived his priesthood first in the diocese of Asti and then, for the rest of his long life, in service of the Holy See."

"I can reveal now that the person called 'La Mongolfiera' in my book #Sodoma (the Italian title of the book) was #AngeloSodano. My rule was not to reveal the homosexuality of a living priest or cardinal. Now that he is dead, the truth can be written," Martel tweeted.

Cardinal Sodano was implicated in most of the major abuse cover-ups by the Vatican.

In a second tweet, Martel called Sodano a "great diplomatic figure" and a "nuncio of the extreme Right in Chile, friend of Pinochet, active homosexual, defender of innumerable pedophile priests" and "the hero of my book #Sodoma (La Mongolfiera)."

Sodano, who was second-in-command to Pope John Paul II as Vatican secretary of state from 1991 and continued in office for a year under Pope Benedict XVI, formed "the first 'ring of lust' around the Holy Father," the journalist wrote in his 2019 runaway bestseller.

Scenes from the funeral Mass of Cdl. Angelo Sodano at St. Peter's Basilica

Martel revealed that Sodano, a second pseudonymous cardinal — "Platinette" — and an unnamed bishop were "regular clients of the Roman male prostitutes, with whom they host foursomes."

The prelates used a network of trusted Vatican intermediaries and money from the Vatican coffers to pay for luxury escorts — costing up to 2,000 euros per evening, Martel disclosed, earning the cardinals the "ironic nickname" of "the ATM priests."

My rule was not to reveal the homosexuality of a living priest or cardinal.

In his book, Martel does not reveal the identity of the intermediaries but names one of the network's ringleaders as "Negretto," a Nigerian member of the Vatican choir. A second intermediary, who is married, is characterized as a "gentleman of His Holiness."

In 2010, Italian police outed Negretto as Thomas Chinedu Ehiem after obtaining over a year's supply of wiretapped phone conversations revealing the operation of a gay prostitution network.

Police also arrested the "gentleman to his Holiness," naming him as Angelo Balducci, who was part of an elite group of ushers whose task is to serve at the apostolic palace when visiting dignitaries meet the pope.

The Vatican immediately terminated the positions of both Ehiem and Balducci following the arrests. Police shut down the prostitution network but were unable to charge the main clients, Cdls. La Mongolfiera and Platinette, given their Vatican immunity.

A lieutenant colonel in the Italian carabinieri told Martel that the cardinals couldn't be called in for questioning because of their diplomatic immunity. He explained, "As soon as they were implicated in a scandal, they were automatically protected."

"They sought shelter behind the ramparts of the Holy See. Likewise, we couldn't search their bags, even if we suspected them of drug trafficking, for example, or take them in for questioning," the officer added.

They sought shelter behind the ramparts of the Holy See.

Martel mentions Sodano by name in his book but does not identify him as an active homosexual. However, he leaves several clues (like the plush residence at the Ethiopian College occupied by the cardinal) as evidence linking La Mongolfiera to Sodano.

Meanwhile, Benjamin Harnwell, a faithful Catholic named in Martel's book, told Church Militant that Martel had "zero scruples in slurring all and sundry as homosexual if it suited his narrative."

"I speak from experience — he did it to me. He did it to the saintly Cdl. Burke," Harnwell, a senior commentator at Steve Bannon's War Room, maintained. "Indeed, before Sodano's corpse is even cold, we witness a shabby operation to ride another news cycle — and shift more copies of his book — off the back of someone who can no longer defend himself."

But Richard Scorer, a veteran lawyer fighting for hundreds of victims of clerical sex abuse, told Church Militant that "Cdl. Sodano, a supporter of Chilean tyrant Pinochet, was implicated in most of the major abuse cover-ups by the Vatican, representing the worst aspects of the Catholic Church embodied in one person."

Martel, an open homosexual, explicitly states that he is "trying to be 'nonjudgmental'" and hence is "less concerned with 'outing' living priests than with describing a system."

"Not being Catholic, I couldn't care less if they appear to be betraying their vow of chastity or if they are in contravention of the rules of the Church," he writes, arguing that clergy of all ranks "have the right to have lovers." Martel also does not condemn prostitution, since it is legal in Italy.

Pope Benedict XVI removed Sodano from his top position as Vatican secretary of state in 2006 after it became known that the cardinal had been protecting serial pedophile, womanizer and drug addict Fr. Marcial Maciel, founder of the Legion of Christ order.

Not being Catholic, I couldn't care less if they appear to be betraying their vow of chastity.

Vatican whistleblower Abp. Carlo Maria Viganò published a statement in 2018 alleging that Sodano, along with 31 other Vatican officials, had covered up the homosexual predation of ex-cardinal and ex-priest Theodore McCarrick.

In 2019, Francis accepted Sodano's resignation as dean of the College of Cardinals, a key role in preparing for a conclave to elect a future pope. Sodano had held the position for 15 years.