On Thursday, Sept. 27, 2018, from the Papal Archbasilica of St. John Lateran, the Mother Church of all Roman Catholics, Pope Francis gave a speech to the participants of the first course of formation on "Marriage and Family" sponsored jointly by the diocese of Rome and the Tribunal of the Roman Rota. Hidden within off-the-cuff remarks missing from Francis' prepared speech are some of the most shocking "teaching moments" ever given by a pope in Church history: one in which the Roman Pontiff preaches an obligation on the part of Catholic priests not to witness Holy Matrimony if the spouse is pregnant.

With presentations given by luminaries such as Cdl. Christoph Schönborn of Vienna, Cdl. Carlos Osoro Sierra of Madrid, Cdl. Angelo De Donatis, vicar general of Rome, and Msgr. Pio Vito Pinto, dean of the Roman Rota, the "Course of Formation on Marriage and the Family for Pastors, Permanent Deacons, Spouses and Family Pastoral Workers of the Diocese of Rome and the Roman Ecclesiastical Province" was held within the Cathedral of St. John Lateran itself in Rome between Sept. 24–26. Presentations were also given by rising papal favorites, Msgr. Alejandro Bunge and Msgr. Vito Angelo Todisco, both prelate auditors (judges) of the Tribunal of the Roman Rota.

The Roman Pontiff preaches an obligation on the part of Catholic priests not to witness Holy Matrimony if the spouse is pregnant.

During the course of his intervention, officially entitled, "Udienza e Magistero del Santo Padre" ("Audience and Magisterium of the Holy Father"), Francis made shocking assertions regarding "rushed" weddings ("di fretta", "riparatori") that were surreptitiously omitted from publication in the Vatican newspaper and not released by the Vatican Press Office. Despite the failed attempt of the Secretariat of State from covering up the Pope's actual words, multiple reports (La Stampa) confirm that the Roman Pontiff stated:

The priest has the obligation to block [the celebration of this kind of marriage]. ... In my diocese ... I forbade the celebration of rushed marriages. Continue with the engagement, let the baby come, let time pass. I did it as well with people in my family. [my emphasis]

This is at least the second time that Pope Francis has publicly mandated the birth of illegitimate children and advocated tolerance, if not endorsement, of cohabitation among unmarried couples even if a baby is on the way or is already born. On June 16, 2016, also in the Archbasilica of St. John Lateran itself, Francis recounted to an astonished crowd of priests and faithful:

I forbade performing religious marriages in Buenos Aires, in cases that we call "matrimonios de apuro," "rushed" weddings, when a child is on the way. Now things are changing, but there is this: socially, everything must be in order, a baby is coming, let's get married. I forbade doing this, because they are not free, they are not free! Perhaps they love each other. And I have seen beautiful cases, in which then, after two or three years, they got married, and I saw them enter the church, dad, mom and baby, holding hands. But they really knew what they were doing. [my emphasis]

During the same speech of 2016, in off-the-cuff remarks now posted on the Vatican website, the Pope also addressed the ubiquitous trend of young couples living in sin together:

Pope Francis' words undermine centuries of consolidated Rotal jurisprudence holding that a premarital pregnancy on the part of a woman is not an impediment to the confection of a valid sacramental marriage. The Tribunal of the Roman Rota has declared:

Her comment, "as I was pregnant by him I thought it [to get married] was the right thing to do" (III, 3/2), indicates a decision taken with reflection and a sense of responsibility. ... One can certainly hold that to get pregnant before marriage shows a lack of moral principle and responsibility. It does not follow that the subsequent decision to marry because of the pregnancy, is proof of irresponsibility or a sign of immaturity. (Coram Burke, sententia diei 25 novembris 1993, RRDec., vol. LXXXV). [my emphasis]

Addressing the allegation of lack of freedom on the part of a pregnant bride, the Rota has held:

[W]hen a couple are truly in love and intend to marry, even an "illegitimate" or "unplanned" pregnancy does not always necessarily or naturally fall into the category of something totally "unwanted," as far as they are concerned. ... Such marriages have not begun very well, but do not of necessity end badly. (Coram Burke, sententia diei 15 decembris 1994, n. 9) [my emphasis]

According to Church law, "Parents have the most serious obligation and the primary right to do all in their power to ensure their children's physical, social, cultural, moral and religious upbringing (can. 1136)." These grave duties are best fulfilled through parents united in Holy Matrimony (cf. St. Th., Suppl., qu. XLI, art. 1, co.). Despite all effects of illegitimacy having been set aside from the 1983 Code, the Church retained the term in canons 1137–1140 precisely to "highlight the sanctity of marriage" (cf. Communicationes, 15 (1983) 240) and further it.

Pope Francis' words undermine centuries of consolidated Rotal jurisprudence holding that a premarital pregnancy on the part of a woman is not an impediment to the confection of a valid sacramental marriage.

Scientifically, a correlation is proven to exist between children born out of wedlock and their increased poor health, delayed development, poor academic performance in school and grave emotional and behavioral problems throughout life. In the United States alone, in 1970, 11 percent of all births were nonmarital. In 2014, the rate has risen to 58 percent.

Most out-of-wedlock births today are to cohabiting couples.

Pope Francis, in preaching that a premarital pregnancy deprives a woman of freedom to marry the father of her child, that it is "beautiful" and better for some cohabitating couples to live in sexual vice for years and not be married sacramentally, and that "a priest has an obligation to block" the Catholic wedding of a pregnant bride, impels us to implore, on this their special feast day, protection from our Holy Guardian Angels, that we not be led naively as sheep abandoned by a shepherd into even greater error. 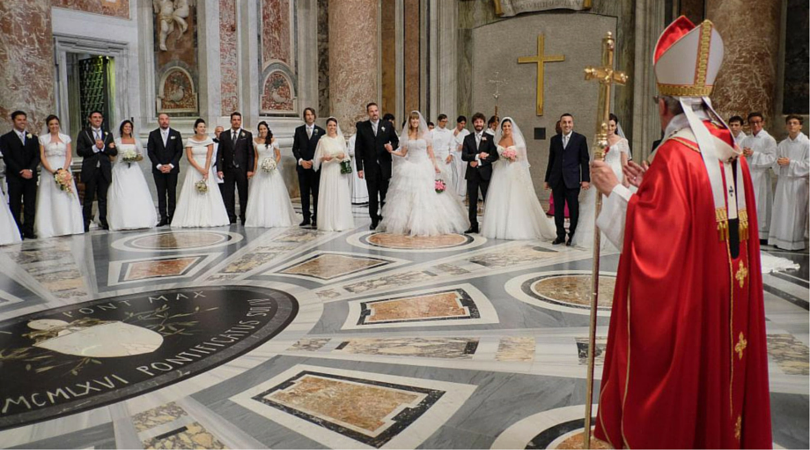