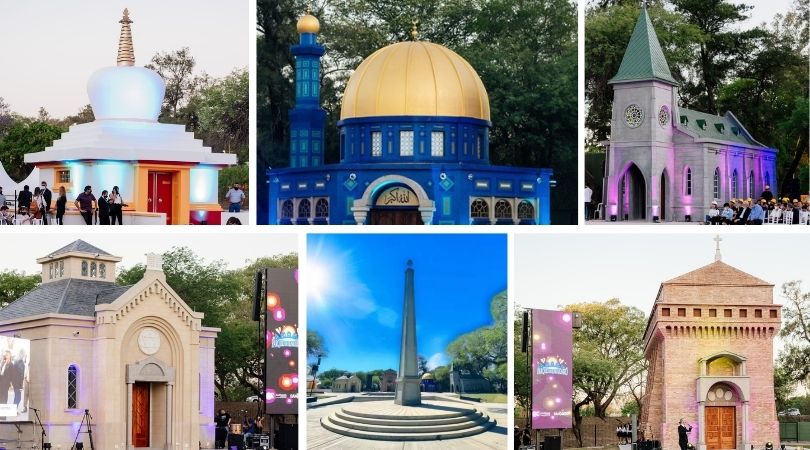 SANTIAGO DEL ESTERO, Argentina (ChurchMilitant.com) - Pope Francis is giving his blessing to an ecumenical and interreligious theme park that promotes the major world religions as equally valid pathways to an encounter with the divine.

The Parque del Encuentro (Park of Encounter) has a Catholic church, Protestant chapel, Buddhist temple, synagogue and mosque all built in a "symbolic fraternal embrace" around a Pachamama amphitheater.

A five-sided "Obelisk of Human Fraternity" climaxes the structure, built in consultation with the Holy Father in the city of Santiago del Estero, Argentina.

While Pachamama is revered as a fertility goddess by the indigenous people of the Andes and a Mother Earth goddess in Inca mythology, Freemasonry's leading exponent, Albert Pike, notes that the Masonic obelisk is an "inoffensive substitute" for the male phallus.

The Park of Encounter symbolizes the world religions united around the primary emblem of a phallus penetrating the Mother Earth goddess to give new life to the human brotherhood. Originally linked to sun worship, Freemasons use the obelisk "in symbolic degrees."

By saying all religions are true, it communicates that none of them are objectively true.

"Francis has been uniting all religions and is recognized among religious leaders as an older brother in the interreligious dialogue that he has been promoting since before being anointed," Argentine journalist Lucas Schaerer observed.

"The Pachamama is even recognized with an amphitheater," Schaerer stressed, explaining that the edifice represents "the South American cult of the Pachamama, built with stone terraces, an expression of the fertility of Mother Earth."

"The news of this undertaking made me happy," Pope Francis reflected in a handwritten note to Argentinian political scientist and communication expert Federico Wals. Wals had sought Francis' advice on the design of the park.

"That in the midst of so many disagreements, a community has the courage to do something like this supposes courage, bravery and, above all, the desire to walk together," Francis noted in his letter sent to Wals for the park's inauguration on Oct. 19.

The fact that Pachamama is at the apex of this monument to indifferentism reveals the author of this war against the true God — Satan.

Writing in Spanish, in his almost illegible handwriting, the pontiff explained that "the small steps towards the encounter between us are creators of peace and harmony" to counter a "third world war" that is evolving "in bits and pieces and in stages."

But popular British author and deacon Nick Donnelly slammed Francis for "promoting the dictatorship of relativism, the ultimate goal of which is the attempt to dethrone our Lord Jesus Christ, true God and true man and His role as the only savior of fallen humanity."

The fact that Pachamama is at the apex of this monument to indifferentism reveals the author of this war against the true God — Satan. There is nothing more certain to bring about the third world war that Pope Francis warns against than this attack on God and His revealed truth.

By saying that all religions are true, despite their wildly contradictory beliefs and rituals, it communicates that none of them are objectively true, reducing them to the subjective choice of personal taste.

The Parque del Encuentro, which extends over two and a half hectares and occupies the site of the former municipal zoo, is intended to inculcate in children and youth the virtues of interreligious dialogue (but it will be open to people of all ages).

The Catholic chapel will project on its ceiling images of Michelangelo's famous frescoes from the Sistine Chapel, demonstrating its close ties to the Vatican.

"I congratulate you for this endeavor. I pray for all of you so that each one is a witness to encounters. Please do it for me. God bless you," Francis closed in his letter.

Last year, Italy's biggest Masonic lodge eulogized Francis' encyclical Fratelli Tutti (All Brothers) as "close to the ideals that have constituted the very foundations of Freemasonry from the very beginning," Church Militant reported.

Titled "A Masonic Value," the cover article in the October 2020 issue of the Grand Orient Lodge's journal, Erasmus, extolled the pope for expressing "apertis verbis" (in explicit words) a "key to universal fraternity" consistent with the doctrine of Freemasonry.

In May 2020, the lodge's journal Nuovo Hiram extolled Francis' Abu Dhabi "Human Fraternity" pact with Grand Imam Ahmad al-Tayyeb as "a turning point in civilization because it will open a new era" if applied.

Spain's main lodge, the Gran Logia de España, also commended Francis' encyclical for "demonstrating how far away the present Catholic Church is from its former positions."

Eight popes over 200 years have issued 20 legal interdicts condemning Freemasonry, and none of the pronouncements have been revoked.

Observers note that the Parque del Encuentro is a prelude to Francis' dream project of a three-religion worship center (the Abrahamic Family House) expected to be built by July 2022.

The interfaith shrine, a result of Francis' meeting with Grand Imam al-Tayyeb in Feb. 2019, bundles together a mosque orientated toward Mecca, a church with its altar facing east toward the sun and a synagogue with its podium and Torah facing Jerusalem.

In 2019, scores of prominent Catholic prelates, priests and lay theologians issued a statement to "condemn the sacrilegious and superstitious acts committed by Pope Francis" in attending "an act of idolatrous worship of the pagan goddess Pachamama."

The statement asserts that Francis "allowed this worship to take place in the Vatican Gardens." It further documents that Pachamama's idol was placed before the main altar at St. Peter's and carried in procession to the synod hall with Francis praying in a ceremony involving this image and joining in this procession.