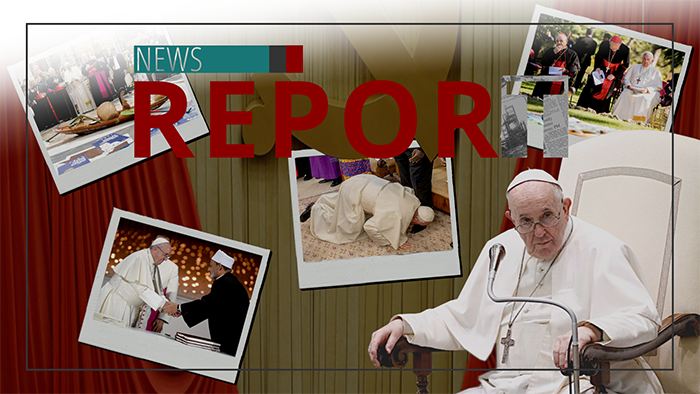 The central theme of Francis' general audience today was hypocrisy. The pontiff defined hypocrisy as "fear of the truth" — and posited the hypocrite does "not know how to love," putting the Church's unity in jeopardy. Church Militant's William Mahoney looks at the pope's message and some raised eyebrows.

In the Paul VI Audience Hall on Wednesday, the pope addressed hypocrisy in the workplace, in politics among those who live double lives and in the Church.

Pope Francis: "Hypocrisy in the Church is particularly detestable — and unfortunately, hypocrisy exists in the Church. There are many hypocritical Christians and ministers."

Francis went on to quote the words of Our Lord in the Gospel of Matthew: "Let your 'yes' mean 'yes,' and your 'no' mean 'no.' Anything more is from the evil one."

But critics recall that leading up to the Amazon Synod in 2019, an intimate of the pope pointed out some of the vocabulary being used was confusing, to which the pontiff responded, "I want the confusion."

Observers further note, confusion surrounding the Amazon Synod was augmented in the Vatican Gardens, where the pope oversaw the worship of a false god — Pachamama.

The pope also oversaw the secretive Vatican-China accord first signed in 2018 and renewed in 2020. Hong Kong's bishop emeritus, Cdl. Joseph Zen, speaks well of the pope in general terms but struggles to understand why the pontiff does not condemn the CCP.

Cardinal Joseph Zen: "So now, with [the] agreement, the situation is even much worse than before. ... He had never any critical words about the government in China — always praising China."

Another commenter spotlighted tension between the pope's call for unity and his recent crackdown on the Mass of the Ages: "You don't build unity by victimizing Traditional Latin Mass Catholics — you create more division and resentment."

In a similar vein, Cdl. Raymond Burke responded in July to Francis' clampdown: "The severity of these documents naturally generates a profound distress and even sense of confusion and abandonment."

And the list goes on, from ambiguous papal documents calling for a global response to climate change to joint declarations on human fraternity without Christ, leaving many Catholics scratching their heads.

The pope's appointments are also dubious — from elevating Bp. Gustavo Zanchetta, his Argentine buddy drowning in homosexual scandal, to placing pro-gay cardinals Blase Cupich and Joseph Tobin on the Congregation for Bishops.