Pope to Fr. Martin: Upset Gays ‘Should Look for Another’ Parish 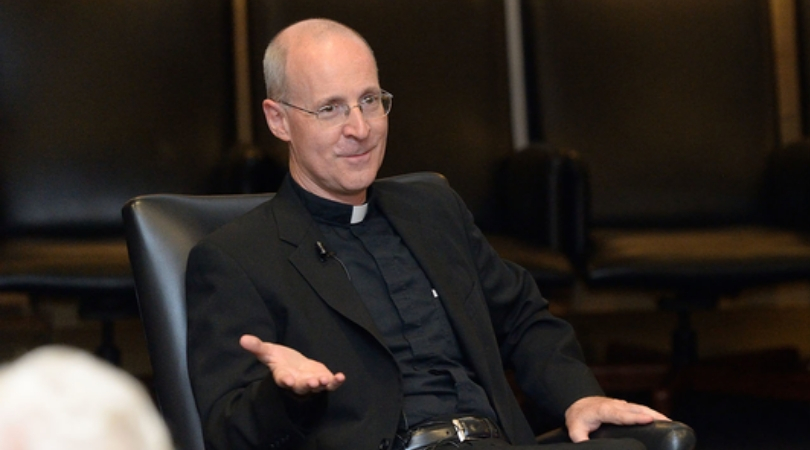 Father James Martin, the leading propagandist for LGBT causes in the Church, met in late September with Pope Francis at the Vatican. The 30-minute meeting itself generated headlines and photos, but the content of the conversation between Martin and the pope was not revealed — until now.

"He asked me not to go to the press, because journalists might twist the conversation," said Martin Sunday night at a talk before "Out at St. Paul," a LGBTQ group at the Church of St. Paul the Apostle on the Upper West side of Manhattan.

The moderator for the event described himself as a supporter of Dignity, the openly heretical homosexual group banned by the U.S. Conference of Catholic Bishops.

I had to laugh at the setting for the talk — the parish center for a church named after the Church's loudest critic of homosexual behavior, St. Paul. I braced myself for an hour or so of sophistries, evasion and gloating, and Fr. Martin didn't disappoint.

He first told the crowd that it was okay to "tell their friends" about the talk but not members of the press. Treat it as "off the record," he said — a ludicrous unilateral demand that I told him during the Q&A period I would not honor.

The mood changed from 'All are welcome' to 'Get the hell out.'

Needless to say, I was the skunk at the garden party. The mood in the room, once I stood up and asked Martin if he supported the Catechism's condemnation of homosexual acts, changed from "All are welcome" to "Get the hell out."

But before I get into that, let me give you Martin’s description of his conversation with the pope. It was disturbingly newsworthy.

Sounding very pleased with himself, Martin said that he used much of the 30-minute meeting to detail the complaints of the "LGBTQ community." When he told the pope about the problems that gays face from "homophobic" pastors and asked him how homosexuals should respond to such resistance at a parish, the pope replied, "Look for another one."

The pope praised his book and endorsed his subversive campaign within the Church. "Continue your ministry in peace,” the pope said to Martin, who bragged about how much newfound respect he has enjoyed from churchmen since the meeting.

"Every bishop in the world saw the photo of us together," said Martin. "This is a pope who uses signs to communicate. The meeting with him gave me and us a lot of currency."

Martin said the meeting will make it very difficult for bishops to keep his "ministry" out of their dioceses.

He found the pope "very attentive" when he complained about the "discrimination" staffers in gay marriages experience at Catholic schools. After he told the pope about a "homophobic" pastor who railed against the LGBT agenda at an Easter Mass, the pope asked with dismay, "He did that at an Easter Mass?"

Martin noted that the Vatican remains "a court" and those whom the pope favors with a meeting rise in it. He said that the day after his meeting with the pope he met with members of the Congregation for Education to complain about a document it produced on "gender ideology." According to him, they were eager to listen, having been wowed by his meeting with the pontiff the day before.

Martin was almost giddy about his papal pat on the back. He laughed about the displeasure his meeting caused "right-wing sites like Church Militant, LifeSiteNews and Father Z."

"The right-wing freaked out," he said, but left-wing cardinals congratulated him. He declared the pope’s most recent batch of cardinals "the most LGBT-friendly consistory in the history of the
Church," and urged members of the audience to pray for the pope’s health and longevity so that he can continue to stack the conclave with supporters of homosexuality.

Martin said that the new cardinal from Luxembourg, Jean Claude Hollerich, gushed to him about how the head of his country is a homosexual in a "wonderful" gay relationship.

Cdl. Hollerich gushed about how the head of his country is a homosexual in a 'wonderful' gay relationship.

The Jesuit priest took much heart from the liberalizing atmosphere at the Amazon Synod. "I would like to see woman deacons," he said.

But he cautioned the crowd that change will come slowly in certain parts of the world. He bemoaned the recent comments of "Polish bishops" and others from "Eastern Europe," and said that many in the African church are hostile to the LGBT cause. Too many bishops, he said, favor "repressive laws."

Martin allowed that his "ministry has a long way to go," which made me curious. What exactly does that mean? Jesuitical and evasive as usual, Martin wouldn’t specify what it meant when I asked him about it during the question-and-answer session, though anybody even remotely paying attention can guess its meaning: a change in Church teaching from condemning homosexual acts to celebrating them.

Martin refused to answer my simple question: Does he support the Church’s existing teaching on the sinfulness of homosexual acts or not? He instead tried to make me the issue, demanding to know if "I was a reporter" and whether I was going to report his remarks.

"Of course, I will," I said. "Answer the question." He wouldn’t. The crowd at that point booed me loudly and the event ended in an intolerant hiss.