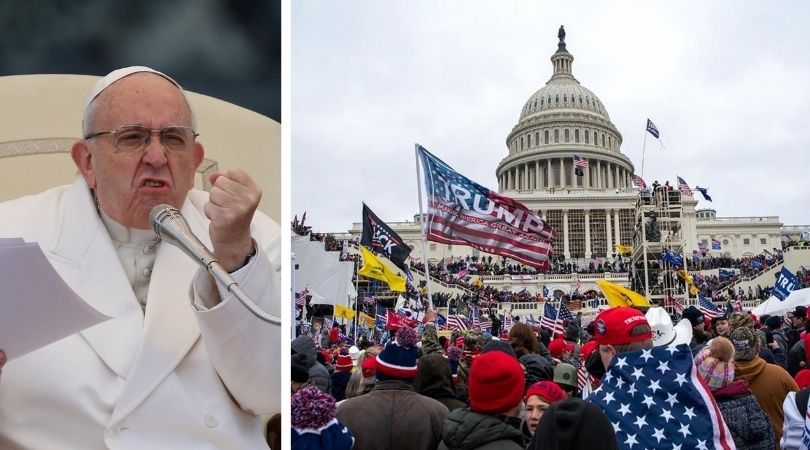 VATICAN CITY (ChurchMilitant.com) - Raging against Capitol Hill rally protestors and COVID-19 vaccine skeptics, Pope Francis announced he will take the abortion-tainted Pfizer jab when the Vatican rolls it out this week.

In an interview aired Sunday evening on Italian television's TG5, Francis said doubting Thomases who refused to take the jab when it was safe possessed a "suicidal denialism."

"Ethically, everyone should receive the vaccine," the pope insisted, in the wide-ranging Canale 5 interview with journalist Fabio Marchese Ragona which covered the Wuhan crisis, the vaccine, the Capitol Hill siege, abortion and politics.

"It is an ethical option, because you risk your health, your life, but you also risk the lives of others," Francis opined, contrary to world-renowned virologists and immunologists who have warned that the vaccine may have serious and unknown health consequences.

It is time to "think about the 'we' and erase, for a period of time, the 'I,' putting it in brackets," he emphasized. "Either we are all saved together, or no one is saved."

The pontiff will receive the Pfizer-BioNTech vaccine, which uses the HEK-293 (human embryo kidney) cell line from a 1972 abortion, in confirmatory testing, i.e., to "confirm that messenger RNA was properly coding for the spike protein of the SARS-CoV-2 virus."

The vaccine is dangerous and will send people to their doom.

Addressing Wednesday's Capitol Hill siege following the rally addressed by President Donald Trump, the pontiff insisted that violence "must always be condemned, regardless of those who perpetrate it."

"Violence is always like this, isn't it?" the pope asked. "No people can boast of never having had a single day or case of violence; it happens in history, but we must understand well so as not to repeat but learn from history."

However, even mature societies can have flaws, and there are often people "who take a path against the community, against democracy and against the common good," he added.

The violence, said Francis, "came as a surprise" to him. "I was amazed because they are a people who are so disciplined in democracy."

These "'irregular groups' that are not well-integrated in society, sooner or later, will create these situations of violence," the pope explained.

It is an ethical option because you risk your health, your life, but you also risk the lives of others.

Stressing that the pandemic had intensified the "throw-away culture" affecting the weakest members of society including the poor, the elderly and migrants, the pope noted that "abortion is not a religious but a human problem; it is pre-religious; it is a problem of human ethics."

Pope Francis did not condemn the savage Marxist Black Lives Matter (BLM) violence, which destabilized entire cities in the United States for months, with rioters targeting police and replacing order with mob rule.

In Portland alone, rioters laid siege to the federal courthouse and indulged in vandalism, looting, arson and destruction for 47 days in a row from 29 May until mid-July, according to the Department of Homeland Security.

However, as Church Militant reported, Vatican media praised BLM as a "movement dedicated to non-violent civil disobedience through protests against police violence directed at black persons as well as all forms of racism."

"We cannot tolerate or turn a blind eye to racism and exclusion in any form and yet claim to defend the sacredness of every human life. At the same time, we have to recognize that ‘the violence of recent nights is self-destructive and self-defeating," he said, appearing to blame racism rather than rioters, in a June 3, 2020 general audience.

Francis also made a phone call to commend Bp. Mark Seitz of El Paso, Texas, for supporting the violent movement after the prelate knelt with fellow clergy holding up BLM signs.

Abortion is not a religious but a human problem.

The pontiff and Vatican media were criticized for failing to condemn or report on the toppling of St. Junípero Serra's statue in San Francisco, even though the Spanish Franciscan friar and missionary was canonized by Francis in 2015.

Francis refused to condemn BLM mobs vandalizing Catholic churches in California, Minnesota, New York, Kentucky, Texas and Colorado — including St. Peter Cathedral, the Maronite cathedral for the Eparchy of Our Lady of Lebanon, St. Patrick's Cathedral in New York City and the Cathedral Basilica of the Immaculate Conception in Denver.

Meanwhile, Francis' claims about the safety of the Pfizer vaccine has been questioned by a number of scientists, including distinguished microbiologist Prof. Sucharit Bhakti, who warns that "the vaccine is dangerous and will send people to their doom."

Dr. Bhakdi, who has published over three hundred articles in the fields of immunology, bacteriology, virology and parasitology — for which he has received numerous awards and the Order of Merit of Rhineland-Palatinate — has co-authored the bestseller Corona: False Alarm? Facts and Figures with his scientist wife, Karina Reiss.

The book has achieved the status of being the number one bestseller in the Amazon categories of microbiology, pulmonary medicine and health law.