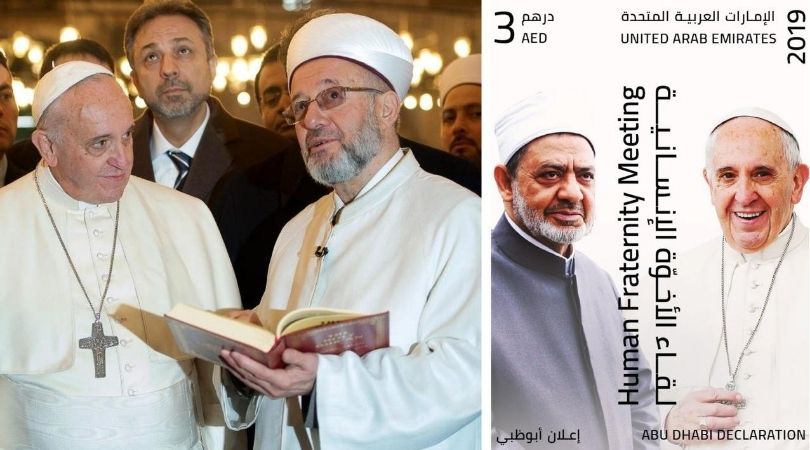 'It will be the ultimate Masonic document'

VATICAN CITY (ChurchMilitant.com) - An Italian bishop close to Pope Francis has revealed that the pontiff is preparing an encyclical on human fraternity as a sequel to his Abu Dhabi covenant with global Sunni Muslim leader Ahmed al-Tayyeb.

"Rumor has it that the pope himself will soon publish an encyclical on the theme of human fraternity," Bp. Domenico Pompili of the diocese of Rieti told a press conference Wednesday.

This pontifical document will be a companion to the "Document on Human Fraternity for World Peace and Living Together," signed Feb. 4 2019 in Abu Dhabi by Pope Francis and Ahmad al-Tayyeb, Grand Imam of Al-Azhar, Pompili indicated.

Once published, it will be the third encyclical of Pope Francis after Lumen Fidei of 2013 and Laudato Sí of 2015.

The impromptu announcement has set off alarm bells among conservatives clergy and faithful Catholics at the Vatican.

"It will be the ultimate Masonic document," a concerned Vatican insider told Church Militant. "An encyclical is something really serious. It is something no serious Catholic can ignore."

"This isn't one of the Holy Father's exhortations," he added.

A pope can teach heresy in an encyclical. That's why it's not called an ex cathedra proclamation.

Although encyclicals constitute part of the Holy Father's ordinary teaching authority, they do not belong formally to the deposit of revelation. Their teachings are not definitive unless specifically stated as such. Therefore, certain points of their teachings can often be changed, states the introduction to the compendium of papal documents on the website of Mount Mary's Seminary and School of Theology, Ohio.

"A pope can teach heresy in an encyclical. That's why it's not called an ex cathedra proclamation," Dr. John Zmirak told Church Militant. "We have levels of authority for a reason. Every time Supreme Court Justice Antonin Scalia did a radio show, that didn't make constitutional law."

"We need to apply to Francis' words a keen intellectual skepticism and pray for the discernment of spirits. Remember that he tells abuse victims that God "made them gay" and gets more outraged at President Trump than abortionists like Emma Bonino," quipped Zmirak, who deals with levels of magisterial teaching in his best-selling The Politically Incorrect Guide to Catholicism.

"'The Higher Committee on Human Fraternity,' which Francis helped found, sounds like something out of an apocalyptic novel," Zmirak added.

In comments to Church Militant, renowned Islamic scholar Robert Spencer said the Pope's human fraternity declaration "has proven to be a smoking ruin, as it has resulted in not even the slightest hesitation among Islamic jihadis to persecute Christians or Islamic supremacists such as Turkey's Erdoğan to appropriate Christian landmarks."

Pope Francis' human fraternity declaration has proven to be a smoking ruin.

"Yet the pontiff keeps doubling down," Spencer lamented.

An encyclical based on the same falsehoods as those of the declaration — that Islam is a religion of peace, that dialogue can overcome the propensity (which is largely restricted to Islam, although the declaration of course does not acknowledge this) for religious violence — will only amplify the reach and influence of these falsehoods within the Church, and move the hierarchy even farther away from what it should be doing: warning the faithful about the nature and magnitude of the jihad threat.

Vatican sources say that Pompili is highly regarded by Pope Francis. Since 2007 he has been director of the National Office for Social Communications of the Italian Episcopal Conference (CEI). Since 2009, he has also served as CEI undersecretary.

Pope Francis phoned Pompili's cellphone at 7 a.m. on Sunday, asking him to pass on his greetings to the people of the diocese during Mass to mark the fourth anniversary of the devastating earthquake near Perugia, 90 miles north of Rome.

Over 299 died and many were injured, while the medieval town of Accumoli in the epicenter was flattened and the nearby towns of Amatrice and Pescara del Tronto suffered severe damage.

In 2015, Catholic commentators noted that Francis' encyclical Laudato Sí was the first and only encyclical entirely on environmentalism. Moreover, while "virtually all encyclicals are addressed to the bishops of the Catholic Church, sometimes with added groups like other Catholic clergy, religious, laypeople and even — in exceptional cases — all people 'of goodwill,' Laudato Sí was instead "addressed to every person on the planet."