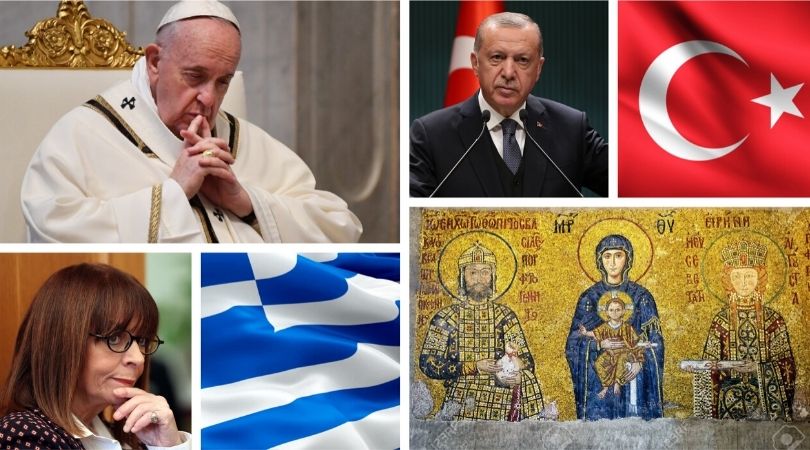 Francis trapped between Islam and orthodoxy

ROME (ChurchMilitant.com) - Greece's president is urging Pope Francis to condemn the Islamic takeover of Hagia Sophia a day after Turkey's radical Islamic president made a counteroffer inviting the pontiff to attend the Byzantine basilica's reopening as a mosque on July 24.

Turkish presidential spokesman İbrahim Kalın revealed Sunday that Pope Francis was among the guests invited to attend the reversion of Hagia Sophia to its status as a mosque conquered by Sultan Mehmet II in 1453.

Greece's president Katerina Sakellaropoulou, however, phoned the pontiff Monday, calling for the move to be "explicitly and unequivocally condemned." The progressive judge, known for her leftwing positions on ecology and same-sex unions, asked Francis to help her raise international support on revoking Turkey's decision.

"I asked @Pontifex to use his influence to raise the awareness of the international community about the conversion of #HagiaSophia into a mosque. I stressed that this decision by Turkey undermines the foundations of tolerance and deepens the rift between cultures and religions," 62-year-old Sakellaropoulou tweeted.

"Pope Francis is now caught in a massive dilemma of his own making," distinguished Islamic historian Robert Spencer told Church Militant. "He has for the entire span of his pontificate assiduously courted the goodwill of Muslims, and Muslim leaders have praised him for his defense of Islam."

"So it's entirely reasonable for President Recep Tayyip Erdoğan to invite him and think he will be delighted to attend and serve as the Turkish president's trophy of the surrender and submission of Christianity," Spencer pointed out.

Pope Francis is now caught in a massive dilemma of his own making.

Spencer, author of the bestselling The History of Jihad: From Muhammad to ISIS, described the trap Francis had created for himself:

If Pope Francis does attend, however, he will insult and offend millions of Christians, Catholic and non-Catholic who wonder why he hasn't stood up for Christianity the way he has for Islam and why he would attend a ceremony that commemorates what Erdoğan believes is the triumph of Islam over Christianity and its superiority to Christianity.

Spencer, director of Jihad Watch and Shillman Fellow at the David Horowitz Freedom Center, also noted that the pontiff's "Human Fraternity declaration with the Grand Sheikh of al-Azhar has not brought about harmony between the two religions, nor will it — and now he is caught between reality and the bland fictions he has propagated about Islam being peaceful."

Meanwhile, Greece's president is slamming "the decision of the Turkish leadership to turn Hagia Sophia into a mosque" as "a profoundly provocative act against the international community."

"It brutally insults historical memory, undermines the value of tolerance, and poisons Turkey's relations with the entire civilized world," she fumed.

"If the pope does answer, I'd expect he will say nothing about Hagia Sophia and instead enlarge upon how different faith traditions have to have mutual respect and engage in dialogue," Spencer remarked.

The injunction to protect churches applies only to dhimmis — those who have surrendered to Islam, are subject to its rules and paying the jizya tax to their Muslim overlords.

Pope Francis broke his silence on Hagia Sophia at the end of his Angelus address July 13 to deliver a six-word (not counting a single letter preposition and conjunction) non-condemnation of the takeover of the basilica built by Emperor Justinian the Great in 537.

"Penso a Santa Sofia, e sono molto addolorato" (I think of Hagia Sophia, and I am very saddened), the pontiff said. One critic blasted Francis, commenting that "the loquacious and ever-sensitive bishop of Rome is ... silent."

"Hagia Sophia has been turned into a place of worship where the name of God will be remembered. This place was converted not from a church to a mosque, but from a museum to a mosque. However, it will remain a cultural area as well as a mosque," Kalın said.

Kalın also assured the international community that the Byzantine Christian icons "will be preserved untouched."

"These mosaics are beautiful mosaics that describe Jesus, the Virgin Mary and other Christian personalities," he stressed.

Last week, Egyptian Grand Mufti Shawki Allam sparked controversy in the Muslim world after claiming that Hagia Sophia's conversion into a mosque is "impermissible" and "forbidden in Islam."

"Islamic texts tell us that we are protectors and defenders and should, therefore, take great care with human cultural heritage," Allam said, arguing that Muhammad followed this principle when Muslim armies conquered Egypt, the Levant and Iraq, as well as countries that were home to civilizations including Persian, Roman and Pharaonic.

Earlier, A. Belteshazzar, Arabic author of The Mosque and Its Role in Society, told Church Militant that Egypt and Turkey were playing a game of "good cop/bad cop," and according to Islamic law, the mosque — once seized and declared as Islamic territory (waqf) — could never be relinquished either for secular or, even worse, for Christian purposes.

"Don't forget Egypt's Grand Mufti Shawki Allam, President Erdoğan and Al-Zahar's Grand Imam Ahmed al-Tayyeb are all Sunni Muslims and on the same side," he said.

"Moreover, the injunction to protect churches applies only to dhimmis — those who have surrendered to Islam, are subject to its rules and paying the jizya tax to their Muslim overlords," he clarified.

In June, Church Militant reported that Egypt's Dar al-Ifta, the central authority for issuing fatwas (religious rulings) led by Allam, had backtracked on labeling the historical event as occupation, and instead glorified it as "a great Islamic conquest."

Erdoğan reiterated the theme of Islamic conquest, triumphalism and supremacy in his "victory address" on the takeover of Hagia Sophia.