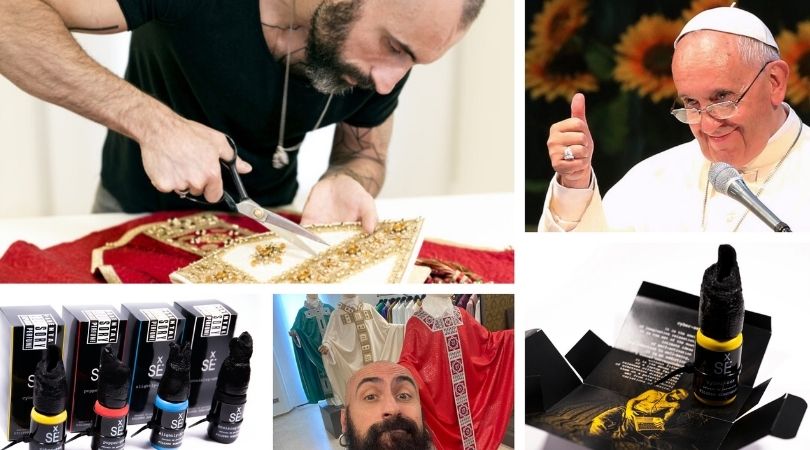 MONDOLFO, Italy (ChurchMilitant.com) - Pope Francis' vestments designer, a flamboyant homosexual activist, is flaunting his papal credentials to market a brand of homoerotic perfumes for men. Advertisements for the products make use of sacrilegious, satanic and sexual imagery.

Sorcinelli claims XSÉ is a "graphically captivating name." It appears on his products with the "X" above the "SÉ," thus spelling out "sex" to the viewer. He advertises the perfumes for the man "ready to differentiate ... himself from the others that surround him" — a not-so-subtle gay allusion.

The homoerotic fragrances, which carry the label "parental advisory: explicit perfume," are described as "a journey through spirituality and harmony in the constant and daring search for beauty."

Sorcinelli is more faithful to his Catholicism than many homosexual clergy.

The four perfumes in the "perversion extract" range are named "Popper Pop," "Cyber Sex," "Cruising Area" and "Slightly B!tch." The papal tailor marketing them describes himself as a "man who communicates through the signs of his continuous free living, without artifice."

One of the ads for the perfume range features a demon-like figure bathed in red light with a mask and collar — evocative of "bondage sex" accessories.

Portrait of an artist: Filippo Sorcinelli talks about his work and faith

A church organist from the age of 13, Sorcinelli markets his "Extrait de Musique" (musical extract) brand range as being made up of "sensual and rough" fragrances "whose names and bottles are a faithful reproduction of the registers of the grand organ of the Cathedral of Notre-Dame de Paris."

Italian media report that the pontifical stylist is a card-carrying member of Arcigay, Italy's first and largest gay-activist organization. It campaigns for "equal marriage rights and the recognition of LGBTI parenting rights" — which are not currently enshrined in Italian law.

I suspect he may have changed his stance given Francis' affirmation of Catholic homosexual couples.

The 46-year-old designer from the village of Mondolfo in the province of Pesaro Urbino has been eulogized as an artist "with Rasputin's beard, having an aura of serenity like a Zen monk, with a pale face that recalls the self-portrait of El Greco in the role of the apostle Matthew."

In his perfume advertisement, Sorcinelli says he wants "to articulate the uniqueness of an intense and sincere journey, suffered and spiritual."

A source close to the papal outfitter, who spoke with admiration for Sorcinelli's person and skills, told Church Militant that the "autobiographical note is a reference to Sorcinelli's own struggle between his Catholic faith and his homosexuality."

"In many ways, Sorcinelli is more faithful to his Catholicism than many homosexual clergy who clandestinely play out their homosexual urges while remaining in the closet," the source said. "He often goes to Mass, and loves the Traditional Latin Mass, but tends not to receive Holy Communion."

"I suspect he may have changed his stance given Francis' affirmation of Catholic homosexual couples," said the Milan-based source, referring to the pope's phone call to a gay couple in 2020.

Andrea Rubera and Dario De Gregorio, who are credited with convincing the pope that homosexuals have the right to have a family, were "married" in Canada in 2009 and had three children through a lesbian surrogate mother, as Church Militant previously reported.

The autobiographical note is a reference to Sorcinelli's own struggle between his Catholic faith and his homosexuality.

Sorcinelli founded his liturgical vestments company Lavs Atelier (Lavs stands for Laboratorio Atelier Vesti Sacre, which also reads as "laus" — the Latin word for "praise") where he creates sacred vestments for Catholic clergy all over the world.

The costumier says he "considered the idea of entering the seminary as a child because faith has always played an important role in [his] life. But then [he] realized that that wasn't the only way to serve God, and ... followed other paths."

"Becoming a stylist was not in my plans; I had never thought about it," Sorcinelli mused, reflecting on how his "fascination with the sacred was born" as a child "plunging [his] hands into the fabric of the vestments, surrounded by the scent of incense and the music of the organ."

When a friend contacted Sorcinelli in 2001 revealing he was about to take vows, Sorcinelli told the friend to hold off on buying a chasuble because he would provide it, the tailor noted, describing how he designed his first sacred garment and stitched it with the help of his aunt and sister. "I was returning from Rome, where I was studying at the Pontifical Institute of Sacred Music," Sorcinelli said.

In 2002, Cdl. Angelo Bagnasco, then archbishop of Pesaro, heard of Sorcinelli and invited him to design liturgical garments.

His range of 27 perfumes is produced by a Milan-based company that translates Sorcinelli's experiences into fragrances.

"Benedict XVI's master of ceremonies then phoned me to commission a garment for the pontiff," the papal tailor revealed. "Although we were certainly not the only ones working for the Vatican, we became the outfitters [referred to most]."

Sorcinelli underscores Francis' "noble simplicity" in requisitioning vestments as "clearly very different from his predecessor," emphasizing that papal vestments are "created for the most solemn celebrations, made to last for centuries and one day take [their] place in a museum."

His wide range of 27 perfumes is produced by a Milan-based company that translates Sorcinelli's experiences into fragrances. "I have explored the world of identity and sexuality in this pandemic year," the entrepreneur boasts.

A dispute over Sorcinelli's homosexual allegiance was first flagged by a letter signed by four members of the Center for Liturgical Action, objecting to the tailor's membership in Arcigay. Disclosing his card number, 11546401, the letter noted that "this does not mean that he is homosexual, and there would be nothing strange about it."

The vestments industry is worth millions of euros, and fierce battles for contracts are fought "behind clouds of incense."

Prices for a cardinal's outfit range from 5,000–30,000 euros. A papal stole costs around 900 euros and an ivory-colored chasuble is priced at 9,000 euros. Sorcinelli sells his homoerotic perfumes for 130 euros each.

Church Militant contacted the maestro, asking if he was in a homosexual union and if he would like to see a more progressive Church as signaled by Francis' openness to LGBTQ+ people in the Church, including his support for same-sex unions.