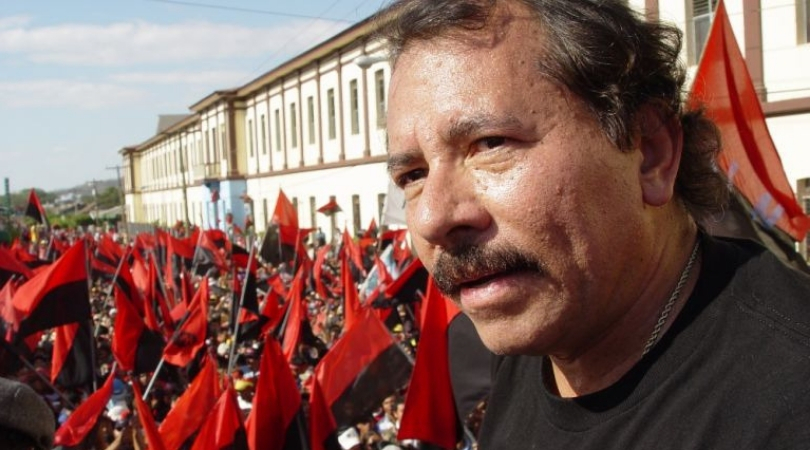 Pope Francis' relative silence and apparent inaction in the face of mounting persecution of the Church by the government of Nicaragua has recently been characterized by a Miami Herald article as "shameful," "inexplicable" and "anemic." Anemic? Of course. Shameful? Certainly. Inexplicable? More like business as usual.

Nicaraguan president Daniel Ortega has held a central place in his country's politics since the 1970s, when he was a leading figure within the communist Sandinista rebellion that (with Soviet Union backing) was waging a guerilla war and terror campaign against the country's more or less conservative government. When the government collapsed in 1979, Ortega became head of the new regime.

Nicaragua was soon featuring prominently in the Liberation Theology movement and John Paul II's battle against it. Several of the prominent clerical revolutionaries whom John Paul personally suspended from priestly ministry were from Nicaragua. Even the most iconic image of that pope's efforts — his sharp rebuking of Fr. Ernesto Cardenal (then Sandinista Minister of Culture) in front of a crowd of thousands while news cameras were filming every moment — took place there.

By 1990 the efforts of presidents Reagan and Bush had facilitated free elections which were able to break the Sandinistas' monopoly of power, and within a few years the party began to fragment. Whether he recognized that the full implementation of the Sandinista agenda was incompatible with reality, desired power or in some way combined both attitudes, Ortega became leader of the (relatively) moderate faction and evolved into a typical Latin American strongman, left-leaning and somewhat chameleon-like, a sort of Nicaraguan Juan Peron. Other leading figures in the Sandinista National Liberation Front believed the party was betraying its ideology and broke away from it to form the Sandinista Renovation Movement.

After 16 years as an opposition leader, Ortega was elected president in 2006 as the result of an alliance with more traditional elements within the Church and with Nicaraguan conservatives, whom he placated by abandoning his earlier support for abortion to a pro-life stance and by accepting the conservative Jaime Morales Carazo as his running mate.

He continued to insist on socialist economics, however, and in the next election replaced Carazo with his own party's Moises Omar Halleslevens Acevedo, who in turn was replaced by his wife one election later. By 2018 he had gradually established a de facto one-party government, not by formally eliminating alternatives but by purging the government of serious individual opponents.

Throughout his time in office, Ortega has demonstrated consistent hostility toward the United States. Under his leadership, Nicaragua joined the Bolivarian Alliance for the Peoples of Our America, a socialist-leaning, Latin American trade organization founded by Fidel Castro and Hugo Chavez.

He favored a Marxist rebel group in Colombia that funded its war against the government through kidnap for ransom, extortion and drug trafficking; attended the inauguration of socialist Venezuelan President Nicolas Maduro; worked towards cooperating with Iran (which he sees as a revolutionary ally against "imperialism"); and endorsed the presidential campaign of Bernie Sanders (who in the 1980s praised the Sandinista government and advised Ortega on how to attract sympathy in the United States).

Ortega's strong-arm methods have, however, united opposition groups from all corners of the political spectrum, though domestically the opposition tends to be led from the Left. The chief opposition group, the Blue and White National Unity Movement, is little more than a front for the breakaway Sandinista Renovation Movement.

Bishop Silvio Jose Baez (a leading clerical opponent of Ortega whom Francis ordered to move to Rome following both a government request for his removal and U.S. discovery of an assassination plot against him) is a friend of Ernesto Cardenal and an admirer of Sergio Ramirez and Gioconda Belli (writers who held important offices in the Sandinista government of the 1980s) — all of whom are opposed to Ortega.

It is when international politics are factored in that the situation approaches a Right/Left conflict. Ortega has ensconced himself at the center of leftist Latin American alliances hostile to the United States. Within Nicaragua it is Ortega who carries the banner of the anti-American and "anti-imperial" banner.

Despite the fact that no more than a minority within the Nicaraguan opposition consists of conservatives hoping for an American influence on domestic ideological politics, the opposition movement as a whole realizes that it cannot succeed without some form of foreign backing — backing that demands a relationship with the United States, which is grounded in pragmatism rather than ideological hostility. However much some within the opposition aim at a domestic lurch to the Left, the fall of Ortega would likely aid the international Right.

Pope Francis' approach to the crisis in Nicaragua seems grounded in the same agenda, which leads him to harshly criticize America and Europe while bending over backwards to accommodate the brutal regime in China.

Pope Francis' approach to the crisis in Nicaragua seems grounded in the same agenda.

If his behavior is not disturbingly consistent it can only be absurdly ironic. Looking back to the Salvadoran civil war of the 1980s he admires Abp. Oscar Romero, who, though he opposed Marxism and formal Liberation Theology, led a crusade against atrocities committed by a U.S.-backed government that indirectly aided communist rebels (who were backed by, among others, Ortega's original Sandinista government) and the cause of the international Left.

Now when atrocities are committed by a rabidly anti-American government that is a pillar of the Latin American Left — a government whose destabilization would strengthen the United States and international conservatism — Francis is cautious in his public utterances and removes from the fight against atrocities Churchmen who are friends with one of history's most prominent liberation theologians.